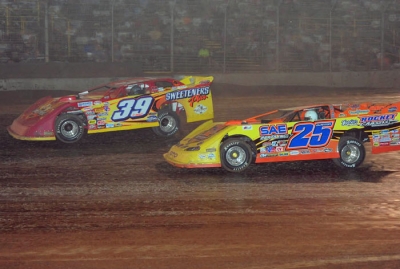 SARVER, Pa. (June 26) — Shane Clanton celebrated after finally winning the Firecracker 100 presented by GottaRace.com on Saturday night at Lernerville Speedway. Darrell Lanigan, meanwhile, sulked after once again falling just short of victory in the World of Outlaws Late Model Series mega-event that was run in front of a huge crowd and Speed television cameras. | Slideshow

There were wildly contrasting emotions displayed by the top two finishers in the fourth annual Firecracker 100, which served as a satisfying — and lucrative — breakthrough performance for Clanton and another frustrating disappointment for Lanigan.

Clanton, 34, of Locust Grove, Ga., was the star of the show, racing to a signature triumph worth $30,500 that he can put alongside his 2008 World 100 score at Ohio’s Eldora Speedway. He steered his RSD Enterprises Rocket car past Tim McCreadie of Watertown, N.Y., for the lead on lap 73 and went on to cross the finish line 1.007 seconds ahead of Union, Ky.’s Lanigan, who settled for a runner-up finish in the Firecracker 100 for the third consecutive year behind the wheel of his Rocket car.

“To get a win at Lernerville — the legendary Lernerville Speedway — it’s a pretty good feeling,” said Clanton, who was a serious contender for victory in two of the previous three Firecracker 100s but never finished better than sixth (2007). “The place has been bad to me (he suffered a separated left shoulder at the track in 2005), and now it’s good to me so I love it.”

Clanton, who started fifth, reached second place on lap on lap 22 and spent the next 50 circuits chasing McCreadie. He made several bids for the lead but wasn’t successful until lap 73, when he sailed around the outside of McCreadie following the race’s third and final caution period one lap earlier for Steve Shaver of Vienna, W.Va., who started from the outside pole but was never a factor.

“I felt we had a better race car (than McCreadie),” said Clanton, who registered his second WoO LMS win of 2010 and the 13th of his career. “But we got to scrambling there a little bit — when I got to him, he’s turning left, and I get to the top and he’s turning right. I was biding my time there, so I was glad the caution came out.

“I chose the outside (of the second row behind McCreadie in the Delaware-style restart alignment) just to try and get a run on him. He left me the whole outside there and I took advantage of it.”

The race stayed green to the finish and Clanton was never challenged over the remaining distance, but he did have some anxious moments after Lanigan overtook McCreadie for second on lap 82. Lanigan appeared primed to make a late-race charge that would erase his bitter memories of leading a combined 150 laps in the last two Firecrackers 100s only to be passed for the lead late by eventual winners Brian Birkhofer of Muscatine, Iowa, in 2008 and Mars in 2009.

“I looked (at the infield scoreboard) and (Lanigan’s) in second and Jonathan’s telling me the lead’s shrinking down the backstraightaway,” said Clanton, noting the signals he received from his crewman Jonathan Owenby. “So I said, ‘Oh, I got to go now.’ (Lanigan is) always good here, so yeah, I was worried about him.”

Alas, Lanigan, 40, wasn’t able to run down Clanton. The 2008 WoO LMS champion remained the perennial bridesmaid in the Firecracker 100.

“Unbelievable,” Lanigan muttered while sitting on a concrete wall in the infield after climbing out of his car for the postrace ceremonies. “We had a good car again this year, but me and Clanton were so equal it was real hard to make up any ground. We’d hit a good lap and catch him a little, and then he’d hit a good lap and get some space on me again.”

McCreadie, 36, led more laps than any other driver after passing early leader Brady Smith of Solon Springs, Wis., who started from the pole position, on lap 20. But the 2006 WoO LMS champion and winner of Friday night’s 30-lap preliminary was no match for Clanton once his car’s handling began to falter after the halfway mark.

“I was good, not great, until then,” said McCreadie, who didn’t qualify for the 2009 Firecracker 100 after barrel-rolling several times during a qualifying heat. “All of a sudden I couldn’t steer at all. I couldn’t keep it in the traction that was around the bottom anymore.”

McCreadie’s car did sport a bashed-in right-side door from an encounter he had with Bub McCool while lapping the Vicksburg, Miss., driver, but he doubted that the damage hampered his effort.

“I don’t know if it affected the car or not, but I’m sure that’s not why we lost,” said a dejected McCreadie, who blamed himself for the scrape with McCool. “Shane had the best car at the end — that’s all. We have no excuses.”

Mars, 38, was the highest-finishing driver behind Clanton who was actually satisfied with his outing.

“My tire combination wasn’t really good on the restarts,” said Mars, who grabbed third from McCreadie on lap 89. “It took me a few laps to get going. We felt pretty good on long runs, but the car started feeling weird and laying over (late in the distance) and was wondering what was going on. Here the right rear tire was going flat — I started wheel spinning to keep air in it, so I was happy to get third.”

There were no major accidents in the Firecracker 100, which had only three caution flags and was completed in just over 43 minutes.

Will Vaught of Crane, Mo., brought out the first caution flag when he spun on lap 18 between turns three and four.

Shortly after the restart for Vaught’s problem, inaugural Firecracker 100 winner Scott Bloomquist of Mooresburg, Tenn., slowed to trigger yellow-flag conditions on lap 21. Bloomquist, who had come together with McCreadie on the homestretch while battling for second on lap 19, pitted so his crew could check out his car’s right-front corner. He returned and rallied to finish eighth.

Both Francis and Smith were hampered by similar problems: hanging carburetors that made it difficult for them to correctly slow their cars to negotiate the corners.

Former Firecracker 100 victor Birkhofer failed to qualify for Saturday’s headliner, but he earned a consolation prize worth $3,000 by capturing the Uncle Sam 30 non-qualifiers’ race.

Birkhofer came from the sixth starting spot to pass 15-year-old Tyler Reddick of Corning, Calif., for the lead on lap 16. He was never challenged over the remaining distance.

The Firecracker 100 presented by GottaRace.com will be broadcast as a two-and-a-half-hour show on the Speed cable network July 17, at 4 p.m. EDT.