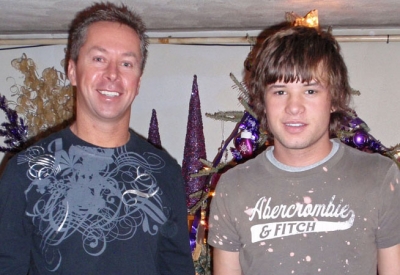 Rick Eckert will be a racer and a race fan during the third annual World of Outlaws World Finals on Nov. 5-7 at the Dirt Track at Lowe's Motor Speedway. As soon as Eckert finishes his World of Outlaws Late Model Series duties throughout the blockbuster weekend, catching a glimpse of the companion WoO Sprint Car action will be on his mind. He will, after all, have a rooting interest in the winged competition.

Eckert's nephew, rising young star Cody Darrah, is scheduled to drive the Kasey Kahne Racing No. 19 Sprinter in the World Finals — a rare instance in which the relatives will practice their respective racing disciplines on the same program.

“Hopefully we don't have any problems with our stuff and I'll have enough time to get up to the fence and see him when he's out there,” Eckert said of Darrah, who enters the World Finals as one of the country's top sprint prospects. “I really enjoy watching him run whenever I can.”

Eckert, 43, of York, Pa., has been a witness to Darrah's development from a wide-eyed kid in awe of his uncle's accomplishments to the confident, talented 20-year-old he is today. A younger brother of Darrah's mother Kitty, Eckert remembers being unsure if Darrah even wanted to race while growing up, but then he saw Darrah “get serious about it” when he went micro-sprint racing as a teenager and he hasn't looked back since.

“When Cody and his dad (Joe) talked about going sprint car racing (in 2006), I was like, ‘You're doing what?' ” recalls Eckert, who often accompanied Darrah to local micro-sprint events and drove a second team car when his schedule allowed. “But he picked up the sprint car deal amazingly fast. He just understands how to race. A lot of young guys will get themselves in bad positions — and he did that originally too, don't get me wrong — but he's learned the right way to race now and his results are showing it. He's already won more races than some guys do in their whole career.

“He's got good crew guys and good equipment, but a lot of guys have that and don't win races. And he's a likable kid, too, so he can go far.

“I know one thing — he's already a better sprint car driver than I ever thought about being,” added a smiling Eckert, who ran sprints in central Pennsylvania briefly before his career path took him to Late Models.

A resident of Red Lion, Pa., Darrah owns six victories this season, including a career-first WoO sprint car score (worth $20,000) in the rescheduled Summer Nationals event on Oct. 3 at Williams Grove Speedway in Mechanicsburg, Pa. His breakout campaign in family-owned equipment helped earn him a chance to serve as a fill-in driver of the Kasey Kahne Racing car on Oct. 10 at Rolling Wheels Raceway in Elbridge, N.Y., and again in the World Finals — and, of course, a shot at earning a full-time ride with KKR in 2010 to hit the road with the Outlaws.

“It's a heck of an opportunity and an absolute honor to drive for these guys,” said Darrah, who arrived at the KKR shop outside Charlotte on Tuesday and will remain there for the next week to help the team prepare for the World Finals. “It definitely puts the pressure on you because with this kind of team you're expected to win, but that's a good thing. I want that pressure.”

Darrah is eyeing a long career as a race car driver. He would love to follow in his Uncle Scrub's footsteps, albeit not necessarily behind the wheel of a Late Model.

“He's the guy I grew up watching and I know his lifestyle inside and out,” said Darrah, who has never tested one of Eckert's orange Dirt Late Models (which happen to carry sponsorship from the Darrah family's J&K Salvage business) but would like to take a few laps in a full-fender machine someday. “Seeing how he's done it gives me that drive to succeed.”

Not surprisingly, Darrah considers Eckert to be the biggest influence on his burgeoning career. While it's been two decades since Eckert drove a sprint car, the general racing savvy he provides Darrah during visits to the track (Eckert attends as many of Darrah's events as he can fit in his schedule) and in conversations at the shop, by cell phone and during family gatherings is invaluable.

"His knowledge of what makes a car go around a track is absolutely priceless to have on your side some nights,” Darrah said of his uncle. “He might not be the greatest Sprint Car mechanic, but he has such a great eye for what's happening with the racetrack. He can see how a track is changing and point that out to me, which is such a big help.”

Eckert and Darrah will certainly find time to swap ideas about the fast, demanding Lowe's 4/10-mile dirt track during the World Finals, which include two rounds of qualifying for Late Models and sprint cars on Nov. 5, and complete season-ending programs on Friday and Saturday nights (Nov. 6-7).

And uncle and nephew will have plenty of familiar faces watching their every move from the massive grandstand at Lowe's. A throng of their relatives and friends are planning to travel down from Pennsylvania for the weekend, including Eckert's parents (Darrah's grandparents).

“It's going to be like a family reunion for us in Charlotte,” Darrah said. “We have a real big family, but we don't have picnics. We go to the races. That's where everybody gets together.”

Just imagine the scene if both Eckert and Darrah are able to thrill their partisan backers with victories during the World Finals. But do they believe a family double is possible?

“I think our odds are good,” asserted Darrah, whose debut at Lowe's a year ago resulted in solid finishes of fifth and ninth in the twin World Finals sprint car events. “I definitely have some of the best equipment in the country under me running for Kasey Kahne Racing, so I'm going there with the expectation that I can win. (KKR) has the confidence to put me in the car, so I can't think any other way.

“And Rick is coming off a win at Hagerstown (on Oct. 25 in the Maryland track's Octoberfest event) and those Bloomquist cars he runs always seem to run great at Charlotte, so I know he can win one.”

Indeed, Eckert is carrying some momentum into the World Finals. He's pocketed a $10,000 check after each of his last two starts — for a third-place finish in the Dirt Track World Championship on Oct. 18 at Lawrenceburg (Ind.) Speedway and his third career Octoberfest 100 victory at Hagerstown — and his three WoO triumphs represent his first multiple-victory campaign on the tour since 2006.

Eckert has some confidence. And with his longtime car owner, Raye Vest, ailing with some health problems that are threatening to cancel his planned trip to Lowe's, the veteran driver also has some extra incentive to reach victory lane.

“We've got our stuff going pretty good lately, so I think I have a shot,” said Eckert, who sits fifth in WoO points. “We've always been pretty fast at Charlotte but haven't had a lot of luck, so hopefully we'll catch a few breaks. Cody was pretty good last year for his first time there, so I think he could pull (a win) off too.

“That would definitely be a good time if we both won. With all our family there, we'd have a ball after the race.”