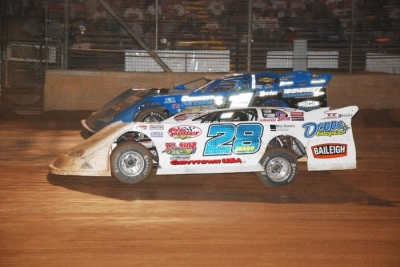 SARVER, Pa. (June 27) — Jimmy Mars was unstoppable in Saturday night's third annual Firecracker 100 presented by GottaRace.com at Lernerville Speedway. After being angered by a scrape with another competitor that forced him to the pit area with a flat left-rear tire on lap 27, Mars stormed through the field to register a dramatic victory in the blockbuster $140,000 World of Outlaws Late Model Series event. | Slideshow of Tim McCreadie's rollover | Slideshow of Saturday's action

Mars, 37, of Menomonie, Wis., completed his stirring rally by passing defending WoO champion Darrell Lanigan of Union, Ky., for the lead on lap 94. He had no trouble over the remaining distance, pulling away from Lanigan with ease after a final caution flag flew on lap 95.

“My emotions were running pretty wild (after sustaining the flat tire),” said Mars, who had advanced his M-B Customs Chassis from the 18th starting spot to eighth by lap 27. “If I wouldn't have been in a car, I probably would've strangled somebody as mad as I was.

“But I calmed myself back down and said, ‘I'm gonna make something happen here.' I was gonna do my best to try to win it, and obviously it worked out.”

The triumph, worth $30,950 including lap money and other awards, was the first of his career on the national seires. His best previous finish on the tour was second on two occasions, including his first-ever appearance at Lernerville on April 17, 2007. The victory marked his fourth in a row overall after he grabbed three straight World Dirt Racing League victories the previous weekend in his home state.

Lanigan, 39, settled for a runner-up finish in the Firecracker 100 for the second year in a row, driving his Fusion Energy Rocket under the checkered flag 2.472 seconds behind Mars. In a near carbon-copy of his 2008 Firecracker run, the race's polesitter fell short after leading the most laps — a total of 82 circuits this time.

Earl Pearson Jr. of Jacksonville, Fla., who started 20th, made a late charge to finish third in his Bobby Labonte Motorsports MasterSbilt car. WoO regular Brady Smith of Solon Springs, Wis., placed fourth in his Team Zero by Bloomquist mount, and Francis faded to fifth at the finish after starting from the outside pole and leading laps 1-9 and 11-12 in the Beitler Motorsports Rocket, which was hampered by a brake caliper that kept locking up.

For much of the distance it appeared that Lanigan would avenge his '08 Firecracker defeat at the hands of Muscatine, Iowa's Brian Birkhofer. He secured the lead from Francis on lap 13 and went on to build as much as a half-straightaway edge during periods of extended green-flag racing.

But Mars simply wasn't to be denied. He methodically worked his way forward after pitting, reaching eighth on lap 62, cracking the top five with an inside pass of Pearson on lap 70 and sliding by Birkhofer for second on lap 81.

Lanigan put up a gallant fight once Mars caught him on lap 86, but he couldn't repel the driver known as the Ice Man.

“I was doing everything I could to hold him off,” said Lanigan, who led laps 1-69 in last year's Firecracker 100. “I just kept getting loose up off the corner at the end and his car was stuck to the ground. He got a run on me on the outside and that was all.”

“He was making his car wide,” Mars said of Lanigan. “It was gonna be hard to get by him on the top, so I figured if I could stuff it around on the outside of him just enough to show him that I was there, that would allow the bottom to get a little bit wider and give me a chance to get by him.

“Basically I made a cross pass coming out of (turns) one and two. He kinda made his car wide coming out of there and I was able to turn down and grab the traction down the back straightaway.”

Mars praised the performance of his car, which he and his brother, Integra Shocks Wrench of the Race winner Chris Mars, built in collaboration with Birkhofer.

“My car would just get into the corner so good,” said Mars, whose previous Firecracker 100 assaults resulted in a 15th-place finish in 2007 and a DNQ last year. “When we came back out (after the pit stop) and the track cleaned off and kept wider and wider, and I could run where I needed to. It was so much fun.”

Lanigan's mood wasn't quite so happy after the race despite the cool $18,156 (including lap money) that he earned for his night's work before a massive crowd. The frustration of remaining without a win on the 2009 WoO was evident in the sullen face of the veteran driver, who has a series-leading five runner-up finishes this season.

“It's aggravating, real aggravating,” said Lanigan, who ended the Great Northern Tour ranked third in the points standings but also riding a 46-race winless streak on the series. “I have plenty of luck (this year), but it's all bad. We just can't catch a break.”

Pearson, meanwhile, appeared to be closing on Lanigan and Mars after he grabbed third from Birkhofer on lap 86, but he didn't threaten either driver after the race's 10th and final caution flag flew on lap 95.

“My car got extremely tight at the end,” said Pearson, who parked the Rocket Chassis he has been running this year in favor of an older MasterSbilt car. “I don't know if a tire gave up or what, but we just couldn't stay at the bottom like I did early in the race.”

Birkhofer failed to defend his '08 Firecracker title, finishing sixth in his M-B Customs car. He started ninth and ran second from lap 67-80 but faded during the final circuits.

Dream XV winner Jimmy Owens of Newport, Tenn., finished seventh after starting 15th. WoO points leader Josh Richards of Shinnston, W.Va., and Rick Eckert of York, Pa., placed eighth and ninth, respectively, after struggling with tire-compound choices that were a bit too hard, and Shane Clanton of Locust Grove, Ga., who used a provisional spot to start 25th in the 100, completed the top 10 after rallying from a lap-15 pit stop to fix a broken left-rear shock bolt.The race was plagued by caution flags, especially during its early stages. Seven cautions flew in the first 27 laps, though none were for serious incidents.

Among the contenders who ran into trouble was Tim Fuller of Watertown, N.Y., who came together with Birkhofer on the homestretch while bidding for third place on lap 23. The contact blew the left-rear tire and broke the left-rear shock on Fuller's car, costing him two laps while repairs were made.

Scott Bloomquist of Mooresburg, Tenn., who won the inaugural Firecracker 100, started fourth but was never a factor in the 100. He pitted for tire changes during caution periods on laps 13 and 20, but the work was for naught as he was lapped by Lanigan on lap 42 and retired several circuits later.

Rob Blair of Titusville, Pa., salvaged his weekend with a victory in the Uncle Sam 30 non-qualifiers' race, holding off the race-long challenges of Caledonia, N.Y.'s Vic Coffey to pocket a $3,000 consolation prize.

Blair, who passed Coffey for the lead on lap two, survived a scare on lap 19 when contact with the lapped car driven by April Farmer of Livingston, Tenn., sent him sliding off the backstretch. Blair kept his car moving, however, as Farmer spun to draw a caution flag, allowing him to remain in the lead for the restart.

Blair's victory came after a broken motor had knocked him from the lead in the fifth heat race on Friday night. He switched to his backup car for Saturday's action and finished second in the C-Main and then fifth in the second B-Main, falling short of transferring to the Firecracker 100 by two spots. Coffey settled for second in the Uncle Sam 30, followed by 17-year-old Austin Hubbard of Seaford, Del., 17th-starter Dan Stone of Thompson, Pa., and Dave Murdick of Slippery Rock, Pa.

After contesting seven events in two states and two Canadian provinces over a 10-day period, the WoO teams will have a welcomed break before heading out on the Wild West Tour. The five-race western swing kicks off on Wed., July 8, with the 30th annual Gopher 50' at Deer Creek Speedway in Spring Valley, Minn.