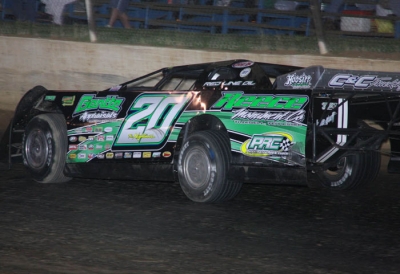 UNION, Ky. (May 30) — Scoring his first series victory of 2009, Jimmy Owens of Newport, Tenn., overtook leader Don O'Neal of Martinsville, Ind., on the 35th lap at Florence Speedway and went on to capture the 23rd annual Ralph Latham Memorial. Owens earned $10,000 for the 50-lap victory at the half-mile oval to become the 11th series winner of the season. | Slideshow

"I've got to thank my car owner Mike Reece, my crew chief Chris Fox, all of my pit crew, my souvenir people and all my sponsors," said the 37-year-old Owens. "Maybe now the season is turning around and thanks to the fans as well for coming out tonight."

"The car was tight coming off of the corners, that last restart we had was good when you're running against (Scott) Bloomquist and O'Neal, I was hoping to get under Scott which we fortunately did and it was good race for the lead with O'Neal.

"Traffic was a pain. O'Neal was tough ... we touched there once and gathered it back up and the car was awesome the rest of the way once the traffic cleared out."

O'Neal settled for second with the series-points leading Bloomquist of Mooresburg, Tenn., in third. Brad Neat of Dunnville, Ky., and four-time series champion Earl Pearson Jr. of Jacksonville, Fla., who is tied for the second spot in Lucas Oil points with Owens, rounded out the top five.

O'Neal and Pearson made up the front row with O'Neal ahead when a quick yellow appeared for a three-car accident in turn two involving Scott James, Steve Casebolt and Brandon Green. On the restart, O'Neal maintained the point as Bloomquist slipped by Pearson for second. With O'Neal keeping Bloomquist in check, Casebolt slowed to draw a lap-12 caution.

On the restart, Audie McWilliams of Walton, Ky., took third from Pearson, but engine problems knocked him out on the 19th lap and reset the field.

With the race going green the rest of the way, Owens slipped by Bloomquist on the restart to grab the second spot and the O'Neal-Owens battle was on. The frontrunners pulled away from the field and faced lapped traffic by the 30th lap.

Owens pulled alongside O'Neal amid the slower cars in a five-lap battle, eventually edging ahead to lead the 35th lap. O'Neal tried to battle back, but Owens maneuvered through the traffic smoothly to get some breathing room in the race's late stages.