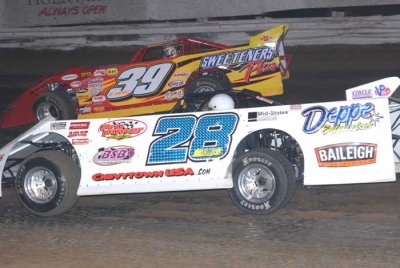 LOCUST GROVE, Ark. (Aug. 16) — Since joining the Dirt Late Model ranks after a successful career in big-block modifieds, Tim McCreadie has made his mark and then some with his quick study of the full-fendered cars, with major victories on World of Outlaws Late Model Series and Lucas Oil Late Model Dirt Series, and his 2006 WoO championship. What was missing? A crown jewel victory. | Postrace notebook | Prerace notebook | Slideshow

The 34-year-old racer from Watertown, N.Y., remedied that by leading 100 laps at Batesville Motor Speedway to capture the 16th annual Comp Cams Topless 100, earning a career-high $25,000 payday and adding another notch in his Late Model belt. Starting outside the front row, McCreadie was in control most of the way, although he faced an early challenge from polesitter Jimmy Mars and a mid-lap pass from Brady Smith on a lap-64 restart. But McCreadie fought off Mars and quickly answered Smith's turn-two move to cruise the final 35 laps in front of an overflowing hillside crowd at the 3/8-mile Ozark oval.

McCreadie hoped the fans enjoyed his show. "I know sometimes it gets strung out there and it gets a little boring," he said, "but I'll tell you what, inside this car, it was nerve-wracking."

McCreadie's hard-charging sensibilities don't always mesh with 100-lappers where durability is key, but except for a burned up clutch that required a four-wheeler push to victory lane, his No. 39 Rocket Chassis was more than up to the task. One new addition was a heavier-duty right-rear wheel after he broke a wheel two weeks earlier leading the $50,000-to-win USA Nationals at Wisconsin's Cedar Lake Speedway. Even track conditions played to his favor at a race that was condensed into a one-day show (and a $15,000 decrease in the winner's purse) when Friday's scheduled preliminaries were rained out.

"It rained here all day yesterday, and it left a little bit of brown (surface), and everybody know these are my types of conditions: slick to traction spots," said McCreadie, who earned his third career Lucas Oil Series victory and second of the season. "The track was good. I just made a couple of mistakes. When Brady got by me, I thought, 'Hell, I just gave it away.' To lead all those laps and give it away, I'd probably have walked home."

Seventh-starting Brian Birkhofer of Muscatine, Iowa, couldn't keep up after the final caution on lap 87 and ended up second while the fifth starting Smith of Solon Springs, Wis., was third. Jeremy Payne of Springfield, Mo., was fourth for his best major-race performance and John Blankenship of Williamson, W.Va., was fifth as no previous Topless 100 winners cracked the top five. Four-time winner Billy Moyer, a hometown driver, shredded a tire on lap 11 and never contended, and three-time winner Scott Bloomquist of Mooresburg, Tenn., the overall fast qualifier, started sixth and never ran better than fourth, calling it a night on lap 54.

"Tim's car is good. I know he's been working on it," said Birkhofer, who was also pleased with his Mars Car and looking forward to upcoming major events. "I'm really pumped about the next one and the next one. I think we're just building a better race car every night."

Birkhofer's steady run earned him second, but Smith had the best chance at stealing the lead on the race's second-to-last restart with 36 laps remaining. McCreadie got into turn one too high and opened the door for Smith, who took advantage to slide up in front of the race-long leader exiting turn two.

"We got a pretty good restart that one time. I knew Timmy was going to go high and I just decided to take a shot. We went low and I got through (turns) one and two really good," Smith said. "And then he got me back in the next corner. It was a good move for us. We had to try something. The big money's on the line. Congratulate Timmy, he did a great job, and we had a great run for our AMSOIL team, too.

"We had a good showing at a big event here, a packed crowd down here in Arkansas, and a top-three finish is great. Granted, we'd loved to have won the race, but we'll take our third."

The ninth-starting Payne broke into the top five after a lap-58 restart and flirted with third before settling for the fourth spot, three positions better than car owner Terry Phillips. "I'm just ecstatic. This new GRT is running awesome. I didn't think the track was going to blow off quite as quick as it did with all the rain we had, so I kind of missed the setup a little bit. I'm pretty happy with a fourth-place finish," the 22-year-old Payne said. "I didn't have a good enough car to win unless they had some bad luck. I was really good on the restarts and then the long runs. Right there in the in-between — that we had a lot of — my car just wouldn't turn. I was hoping it was going to go green there at the end. I think I would've had a top-three finish."

Notes: McCreadie's Rocket Chassis has a Pro Power engine and sponsorship from Sweeteners Plus. ... The race was slowed by six cautions and one red flag. ... The first caution appeared for Kyle Beard's lap-two spin. ... On the restart, things got wild in turn three with a scramble that involved at least 10 cars. Jimmy Owens, Brad Neat, Jason Utter and Matt Miller retired with damaged cars while others pitted for repairs or were sent to the tail for their involvement. None finished on the lead lap. ... A lap-11 caution appeared when Billy Moyer Sr. pulled up with a shredded right-rear time. ... Beard spun again exiting turn two on the 25th lap and McCreadie had to swerve to avoid contact. ... Polesitter Jimmy Mars was running third on the 58th lap when a flat left-rear tire forced him pitside. ... Darren Miller, also running third, slowed with a flat on lap 64. ... The final caution appeared on lap 87 when Mars again slowed on the backstretch; John Blankenship narrowly avoided him as Mars dove toward the infield pit entrance. ... Eight cars finished on the lead lap. ... The highest-finishing former Topless 100 winner was hometown driver Wendell Wallace in sixth. ... Lucas Oil regulars had a tough night, too. None finished on the lead lap. Points leader Earl Pearson Jr. was ninth after taking a provisional.

Polesitter Jack Sullivan cruised to victory while third-starting Brad Neat, rebounding from heartbreak in his heat race, took second from Earl Pearson Jr. on the third lap and held the second and final transfer spot the rest of the way. Pearson, in line for a series provisional, finished third.

Jimmy Owens pounced into the lead from outside the front row and rolled to victory while third-starting Matt Miller got the second and final transfer spot, leaving polesitter Ray Cook on the outside looking in. A couple of early cautions slowed the action, including a first-lap scramble with David Breazeale and Justin Rattliff that sheared the left-side sheetmetal off Rattliff's No. 16.

In the most exciting heat, polesitter John Blankenship won an early back-and-forth duel with Brad Neat, then fought off a ferocious cahllenge from Bart Hartman before cruising in the final two laps.Both Neat and Hartman, however, ran into problems, and that helped fourth-starting Terry Casey finish second despite a poor initial start that saw him slip back to sixth. Seventh-starting Jason Utter, Brian Birkhofer's former crew chief, got the third and final transfer spot, making the deepest rally in any of the heats to earn a feature spot. Neat, who started outside the front row, battled up front with Blankenship through the early laps, but had a poor lap-six restart that allowed Hartman to steal the second spot. Hartman dove under Neat in turns three and four, and the two made contact with Neat spinning and being charged with the caution. Hartman was battling Blankenship for the lead with two laps remaining when a flat right-rear tire forced him to slow and bring out a caution.

Outside front-row starter Brady Smith beat polesitter and four-time Topless winner Billy Moyer by 10 lengths as the top two cars pulled away from the field. Kyle Beard was third the whole way to earn his first Topless 100 start as the third and final transferree over Lucas Oil points leader Earl Pearson Jr. Jason Cliburn got sideways on the backstretch on the first lap, hit the wall and was towed off the track.

Starting outside the front row, Tim McCreadie blitzed the fielding, beating runner-up and polesitter John Anderson by nearly a half-track margin in the caution-free race. Gary Stolba, who started third, finished there and nearly caught Anderson in the closing laps.

Polesitter Wendell Wallace fought off a first-lap challenge from front-row starter Jeremy Payne and cruised the final nine laps. Payne ran a strong second, finishing less than a half-straightaway behind Wallace. Matt Miller held the third spot at a lap-five caution, but Billy Drake and John Mason both got by on the restart. Drake went on to get the third transfer spot while Miller and Mason finished in a dead heat for fourth. The night's first caution waved on the fifth lap when Blake Lane spun exiting turn two.

Polesitter and overall fast qualifier Scott Bloomquist cruised to a 10-lap victory, leaving some talented drivers in his wake. Darren Miller, starting inside the second row, dove low on the first lap to grab the second spot, but he couldn't keep up with Bloomquist. Fifth-starting Terry Phillips and front-row starter Jimmy Owens battled fiercely throughout the race for the third and final transfer spot. Phillips got underneath Owens with a turn-three pass early, then Owens got rolling and regain the position on the seventh lap. Phillips wasn't done, however, going back into third a lap later for the position, leaving Owens in fourth. The battle for fifth between Scott James and Justin Rattliff was far behind the top four in the caution-free race.

With polesitter Brian Birkhofer off to a slow start as the green flag dropped, outside front-row starter Jimmy Mars blazed into the lead and cruised to a 10-lap victory. Birkhofer got rolling after a few laps and began a lengthy battle with fourth-starting Billy Moyer Jr. Birkhofer took the second spot with a late pass while Moyer advanced to his first Topless 100 as the third and final transferring car. Ray Cook was fourth but couldn't catch the top three in the caution-free prelim.

Three-time race winner Scott Bloomquist of Mooresburg, Tenn., was the fastest overall among 67 qualifiers at the 16th annual Comp Cams Topless 100 at Batesville Motor Speedway. Bloomquist posted a lap of 13.132 seconds on the high-banked 3/8-mile oval in the Ozarks.

The final car count was 67 after a couple of late arrivals. ... Each driver pulled to the infield following time trial laps to weigh and watch the rest of qualifying. ... Ronny Lee Hollingsworth got into the turn-four wall on his second qualifying lap. His No. 18 was towed off the track. ... Raymond Merrill of Sallisaw, Okla., typically drives a Wendell Wallace backup car at big-money specials, but he's driving the No. 27 normally driven by Stacy Taylor at Batesville. ... Modified driver Larry Campbell, who drove a Clint Smith backup car a few times earlier this season, entered a Ray Cook MasterSbilt Race Car at Batesville. It was the car Ray Evernham drove in Eldora Speedway's Prelude to the Dream. ... Brandon Smith was in a Bill Frye backup car.