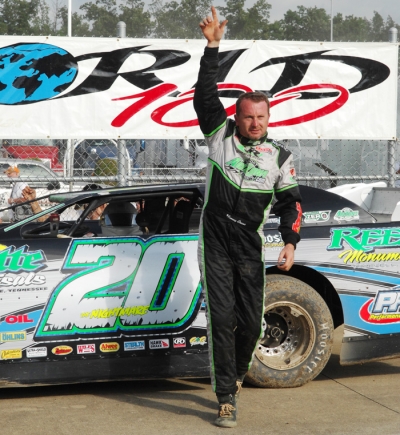 ROSSBURG, Ohio (Sept. 9) — Several years ago, Dirt Late Model fans catching a little modified action couldn't help but notice that the No. 20 won an awful lot of open-wheeled races. Those same folks saw Jimmy Owens jump into the Late Model division four years ago with hints of the same dazzle he had while capturing four UMP modified championships, including one that paid $100,000.

Flash forward to August 2007, and it seemed like the Newport, Tenn., driver was in the mix at every big race as he followed a $10,000 victory in La Salle, Ill., with a career-propelling $50,000 victory in the North-South 100 at Florence Speedway in Union, Ky. He had the kind of month that tabbed him as a favorite for the World 100 at Eldora Speedway, where he was the only driver to qualify for the starting lineups of the preceding seven 100-lap features at the historic half-mile owned by NASCAR star Tony Stewart.

Officially arriving as a national Dirt Late Model start, the driver called the Newport Nightmare dispelled any lingering questions with a Sunday afternoon victory in the division’s toughest and most prestigious event, the 37th annual World 100.

“The best in the country are here, so it’s always a boost any time you win this race,” said the modest, unassuming Owens, a 35-year-old whose country twang has graced victory lane a dozen times in 2007. “I don’t know where it’s gonna put us, but I guess we’re gonna find out.”

The $40,000-plus triumph in the UMP-sanctioned event, postponed by rain for the first time since 1990, came on the heels of North-South triumph, his near-miss at the World of Outlaws Late Model Series Scorcher 100 at Volunteer Speedway in Bulls Gap, Tenn., and top-10 finishes in the high-profile Show-Me 100, USA Nationals and Topless 100 events.

It’s been a true breakout season for Owens, whose 12 victories in 34 starts — including six worth $10,000 or more — have perhaps boosted his status with Scott Bloomquist's Team Zero to, ahem, a notch above the Hall of Fame car builder and driver himself.

Owens' victory in the World 100, a race that annually draws 200 competitors or more, came through a combination of the speed of his Reece Monuments-sponsored Bloomquist Chassis and a healthy dose of patience.

Owens, who set fast time on Friday night with a lap of 15.690 seconds around the high-banked oval, started 13th in the main event but grabbed the lead from Bloomquist on lap 10. Owens surrendered the top spot to 1999 World 100 winner Steve Francis of Ashland, Ky., on lap 18, but he calmly ran in second until regaining command for good from Francis on the 87th circuit.

“Francis did that little slide job on me and got the lead, and I didn’t think I had nothing for him for a while,” Owens said. “But I just kept my head on my shoulders and kept my car smooth, and toward the end I started reeling him back in.

“From years and years of watching guys like Scott and the other professional drivers run, you just learn to use your head, show patience and let the race come to you. That’s what I did today, and it paid off.”

Francis, who won the World 100 in 1999, steadily lost ground to Owens over the final laps but held on to finish second, nearly a straightaway behind the winner at the checkered flag.

Darrell Lanigan of Union, Ky., came from the 14th starting spot to finish third, followed by surprising Wayne Chinn of nearby Bradford, Ohio, whose fourth-place finish was the best for a first-time World 100 starter since Dan Schlieper's third in 1998. Finishing fifth was 23rd-starting Jeep Van Wormer of Pinconning, Mich., who cracked the top five despite damaging his car’s spoiler when he clipped the outside wall in the final laps.

While Saturday's steady evening rains forced an added day at Eldora and had some dreading a daytime race — events that often prove to be single file on sun-baked tracks — the feature was anything but boring and allowed drivers to race against the outside wall, against the inside wall, and anywhere in between.

Owens was among those taking the best advantage of it early in the as he exploded forward on the first lap, rocketing past eight cars to reach the top five in the blink of an eye. He was third on the second lap and rode that momentum directory to the front, taking the lead from Bloomquist, who started from outside the front row and led laps 1-9.

“That was just pretty lucky,” Owens said of his opening-lap success. “Everybody went up high, and I just went down along the wall on the inside. When I looked up and realized where I was, I said, ‘Heck, I’m doing pretty good.’ ”

The quick glide to the front surprised Owens, who had plenty of doubts about his chances.

“Actually, I wasn’t expecting to win because I was starting 13th,” said Owens, who salvaged the last transfer spot in his heat race despite missing the setup (he mistakenly expected the Saturday rain would create wetter conditions for the first prelim). “I was really skeptical about the track. I thought it would lock down and be one-groove because we were running in the afternoon, so I thought there was no way I was gonna make it up through (the field). It never did, though, so that was really surprising.

“My hat’s off to Eldora Speedway for getting the show in today,” he added. “It turned out we had a great track to race on all day long."

After the race’s third and final caution flag flew on lap 54 for Bloomquist, who spun on the homestretch after fading to seventh and then pitted for a tire change, Owens stayed within striking distance of Francis. He made his move on lap 87, surging past a struggling Francis.

“It looked like me and (Francis) both started getting a little push in the middle of the corners, especially down here in (turns) three and four,” said Owens. “His car was getting a little tighter, and mine was also, but we made a little bit of a change in driving style to get through the center of the corner and get off better.”

Francis, who raced on the eve of his 40th birthday, couldn’t get his machine around the track as well as he had during the race’s middle stages.

“I didn’t really need Scott to spin out on the straightaway,” Francis said of the caution flag that wiped out his three-second edge over Owens. “We had a nice little rhythm going at that time. But Jimmy’s car was real good anyway, so I don’t know if the caution changed the outcome or not.”

Whatever the case, something definitely went away for Francis.

“The racetrack was as slow and slick as I’ve ever, ever seen this place,” said Francis, who participated in a Friday qualifying session where lap times were below 17 seconds and in a Sunday feature where times topped 20 seconds. "It was 20.50 lap times, and we were just out there running half-throttle all the way around the racetrack. I never even had to change the throttle (pressure).

“Then, around lap 65 or 70, it got to where I couldn’t turn into three anymore. I had to start coming out of the gas getting into three, and that was sort of the beginning of the end at that point. I kinda knew we were in trouble.

“The track changed a little bit,” he continued. “Everybody decided to get in line on the bottom. That made the lane I was running — a lane up off the bottom — get dusty. We got real, real tight getting into three; we just couldn’t turn into three anymore.”

Francis paused: “We had a good car. We almost got it done.”

“This is a dream come true,” said Owens. “We’ve been coming here to Eldora and qualifying good, and we had some decent finishes. But who would have expected this to happen?”

Owens gave the credit for his career-making victory to his car owner Mike Reece, who provided him an opportunity he couldn’t refuse after he'd become steadily successful with the Frankfort, Ky.-based Harrod Brothers team.

“It was one of the hardest decisions I ever had to make in my life — to leave the Harrod Farms team and all those guys, and come to this one,” said Owens. “You don’t know if you’re doing the right thing or not. (Reece) said, ‘We’re gonna do this, this, and this.’ Well, every day racers get promises, but he’s come through. There’s nothing he said that he hasn’t done.

“I’m proud to win the race for him. He’s a really great guy.”

Reece was just as proud to provide Owens his winning Bloomquist-Cornett engine combination.

“I put him in the car because everybody said he could do it,” an emotional Reece said in victory lane, “and he’s done it!”

Owens made his way to the top of the dirt Late Model world through the modified ranks, spending more than a decade racing in the division. He won UMP championships in 1998, 2000, 2001 and 2002 while building modified chassis.

“To me, the modified deal is an awesome steppingstone,” Owens said. “It prepares you for the track conditions we got out here today. You gotta be real smooth, keep the car under you."

Of course, Owens is still trying to figure out exactly how he’s become the hottest driver in Dirt Late Model racing over the past month.

“This month has been unreal,” said Owens. “I keep waiting to wake up tomorrow and get back to the shop, and the wall will be empty with no (oversized winner’s) checks hanging on it.”

Only one of the race’s three caution flags was caused by an accident. It came on lap three, when Josh Richards of Shinnston, W.Va., spun between turns one and two and collected Steve Shaver of Vienna, W.Va., whose car climbed the outside wall; Brady Smith of Solon Springs, Wis., who continued despite sustaining body damage; Brad Neat of Dunnville, Ky.; and Vic Hill of Morristown, Tenn.

The second caution flag flew on lap 16 when Brian Birkhofer of Muscatine, Iowa, slowed in turn four with mechanical trouble.

Shannon Babb of Moweaqua, Ill., who started 18th, used the extreme inside groove to climb as high as fifth before settling for a sixth-place finish. He passed Bloomquist, who rallied from the rear after pitting on lap 54, on the final lap for the position.

Bloomquist settled for seventh, followed by Wendell Wallace of Batesville, Ark., Donnie Moran of Dresden, Ohio, and defending UMP Late Model champion Randy Korte of Highland, Ill., who ran in the top five for much of the distance in a Gerstner Plumbing-backed No. 7.