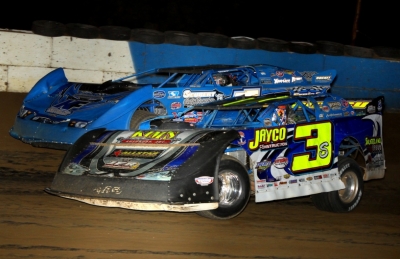 TERRE HAUTE, Ind. (July 12) — Through most of the UMP DIRTcar Summernationals, Brian Shirley has been going for victories and letting the points chase take care of itself. But with the series heading to the daunting half-mile of the Terre Haute Action Track, and the $25,000 championship within his grasp, the 31-year-old driver from Chatham, Ill., changed up his strategy. | Complete Summernationals coverage

“We were really in points-mode, to be honest,” Shirley said after his second-place finish to Don O’Neal, a performance that marked his seventh straight finish of third or better. I felt like we had a pretty good car ... you just know what you’re fighting for at the end of the day now. It’s so close. We just want to make sure that we can do what we can do to finish this off.”

Shirley has been in contention for the title once before when he battled Dennis Erb Jr. to the final race in 2008. But this time, he entered Terre Haute with a 61-point lead that grew to 76 after reigning champion Shannon Babb of Moweaqua, Ill., his closest pursuer in the title chase, finished fifth.

Terre Haute isn’t the type of racetrack to let it all hang out, Shirley said.

"Here, you can hurt motors real bad, and I was just trying to let off early, coast a little bit, trying to give the motor as much breath as I could,” he said. "Just trying to do what I could do to finish the race. That’s basically what it is. This racetrack is so grueling. The temperatures on everything are hot. We were just doing everything we could do to finish the race and make sure we can give our best shot the next two nights.”

Shirley is definitely in the driver’s seat heading to Ohio for Friday’s $5,000-to-win race at Attica Raceway Park and Saturday’s $10,000-to-win race at Oakshade Raceway in Wauseon. Even if Babb sweeps both races, Shirley can capture the title by finishing 12th or better. He’s only finished outside the top 10 three times in 26 events.

“You just try to be conservative,” Shirley said. "Right now, we don’t need to win. We just need to run top three. And everything will fall the way it needs to fall.”

With just two top-five finishes entering the tour’s 26th leg at Terre Haute, Mike Spatola of Manhattan, Ill., was in need of a solid run at Terre Haute in the middle of the final week of the Summernationals. And he was shaping up to get one while running fourth with 10 laps remaining.

But everything went awry when Ryan Unzicker made accidental contact on a restart, sending both cars for a spin. Unzicker ended up facing the wrong way but Spatola — hoping to keep his car moving and retain his position for the next restart — did a 360-degree spin and drove off.

“I don’t know how but we somehow saved it and kept going,” Spatola said. Despite that, officials ruled that he was part of the incident and instructed him to go to the tail of the lead lap. He protested before retiring to the infield.

“They’ve changed the rules so many times I don’t know what they are anymore,” Spatola said. "It used to be, if you don’t stop, you get your spot back. So I kept going and didn’t stop, but apparently the rules have changed for the ninth time in 28 days. So we’ll see what the rules are tomorrow.”

He figured pulling into the infield was more prudent than restarting in the back.

“The motor was hot. When you’re running that good and you feel like you got screwed a little bit and get sent to the back, I’ve learned the best thing is to pull in and cool down before you tear some more stuff up,” he said.

The spin itself was a scary one on the fastest track the Summernationals drivers have faced.

“I did a complete 360 and kept going,” he said. "When you spin here, you’re going so fast. I didn’t really know what was happening. I got hit real hard and I spun so quick, I think I shut my eyes. I was about scared to death when I seen a car coming at me wide open. And I opened (my eyes), and I was facing forward, and I just gassed it up and took off.”

Light at end of tunnel

Frank Heckenast Jr. has had a disappointing tour overall with more subpar finishes than he’d have liked. That contributed to his thoughts of skipping the final two races in Ohio, but a fourth-place run at Terre Haute might’ve changed his mind.

Heckenast wasn’t a factor in prelims and started 14th in the main event. But he restarted seventh with 10 laps remaining and made some nifty moves to work his way up to a fourth-place finish, an improvement of 10 positions overall.

“That caution came out, and I rolled (Jason) McBride and (Bobby) Pierce and one more (car), and then I got to (Shannon) Babb and I, like, made it look like I was running the bottom, so he went down, and I drove by him up on top. It was good. I was real happy with it,” Heckenast said. “It’s just been struggle. We weren’t going to go tomorrow, but now it’s hard not to.”

Heckenast’s best run of the series came with a runner-up finish on the Fourth of July at La Salle (Ill.) Speedway, but he knows his program hasn’t been at its best over the month-long tour.

“I’m not happy with it, but it’s racing,” said Heckenast, who has entered 20 of 26 events. "You aren’t always going to be good. I don’t know. You can’t ever give up. If we’re going to struggle a part of the season, and says it’s just (happening) now for the Summernationals, and when this is over we go to Cedar Lake and Shawano and run good after that, I’ll be happy with that. We’ll take it for what it is and move on, I guess.”