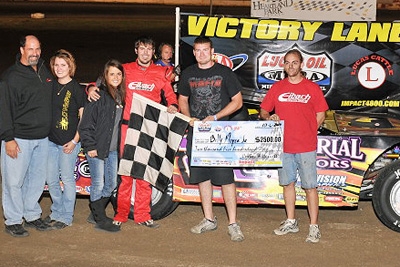 "I was just trying to ride there until I saw a nose," said Moyer Jr., whose victory came in the first night of the tour’s doubleheader weekend at Heartland Park. "Our car was just phenomenal. We've been running terrible here lately. It's good to finally get a special event victory. I love to get another one here tomorrow."

With his runner-up finish, Anderson added two points to his lead in the series championship standings to stretch his advantage to 18 points over Thursday night’s third-place finisher Al Purkey of Coffeyville, Kan. Jeremy Payne of Springfield, Mo., was fourth in the final rundown with Jesse Stovall of Galena, Mo., rounding out the top five.

"I was trying to put some pressure on him (Moyer Jr.), but he didn't flinch," Anderson said of his battle with Moyer. "He did a great job. I did all I could do there the last five laps."

Notes: Moyer Jr.’s Victory Circle Chassis is sponsored by Imperial Motors, Banner Valley Hauling and Henderson Motorsports. ... The victory is Moyer’s sixth of the season and his first since an Aug. 26 event at Tri-City Speedway in Granite City, Ill. ... Moyer’s victory ended Anderson’s two-race win streak heading into the event. ... The tour will be back at Heartland Park Topeka Friday night for a $3,500-to-win event.