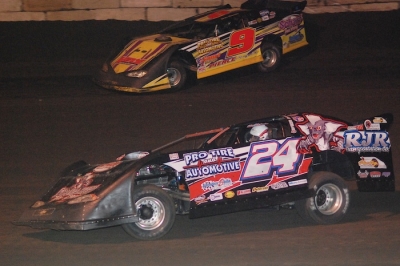 FAIRBURY, Ill. (Sept. 25) — Eric Smith's groovy decision paid off handsomely Sunday at Fairbury American Legion Speedway. After running the inside lane for 51 laps, the Bloomington, Ill., driver jumped to the high side on the final restart of the 60-lap Prairie Dirt Classic and overtook Ryan Unzicker for a $10,000 victory at one of his home tracks. | Video | Slideshow

The two-time and reigning champion at the black-dirt, quarter-mile oval led the final seven laps, pulling away at the finish to win by a full straightaway and the biggest margin of any of four leaders in the season-ending event, twice postponed by rain.

Smith had followed Unzicker in the low groove throughout most of the race, and crew chief Ryan Courtney signaled to Smith to gamble in the trickier high groove on the last of 10 restarts.

"It's fast up there, but you're on a fine line when you're running the top there, and there was a lot of debris up there," Smith said. "So we were just running the bottom. It would take me about four or five laps to get going, and I could kind of run Ryan (Unzicker) back down, but I wasn't going to pass him. "Nine laps to go, Ryan (Courtney), told me to go to the top. So I tightened the seat belts and was just letting it all hang out. It was go for broke there — it was win it or crash it, there was no in between."

Unzicker, who took the point from polesitter and race-long leader Shannon Babb on the 29th lap and outdueled outside front-row starter Brian Birkhofer just past the halfway point, second-guessed his decision to stick with the low groove in the pits following the race.

"I knew the top was going to come into play sooner or later. I just didn't know when," said Unzicker, who set his car up to run the low groove. "I was afraid of it getting cleaned up, black up there, where you could run on the racetrack and not bang the cushion.

"That's exactly what happened. Eric didn't have nothing to lose, you know. The leader always kind of seems to get shafted, but we're happy. I mean, I'd have liked to have won this deal. I don't know. We probably should've went to the top — but we were so good on the bottom all night long. We can't complain about it."

Unzicker settled for second with ninth-starting hometown driver Scott Bull in third. Derek Chandler of Pontiac, Ill., was fourth, giving drivers who live within 40 miles of the track a sweep of the top four positions at a race that's often won by traveling drivers like Babb, Birkhofer or five-time winner Billy Moyer, who didn't enter this year's event.

"You always want to see somebody that runs here on a weekly deal win," Smith said. "I think there were several of us running up front there. I think it was a good race. I was just glad to see somebody from around here win it."

Babb launched into the lead, keeping fellow front-row starter Birkhofer in check as three cautions slowed the action over the first 11 laps, including when former race winner Kevin Weaver — driving John Hollifield's car after breaking a crankshaft in his normal No. B12 — got into the frontstretch wall and required a two-wrecker removal.

With Babb running the high groove, sometimes losing momentum when banging into the cushion, Birkhofer stayed close down low while Unzicker and Smith gave chase. Unzicker was up to second by a lap-28 restart, and he beat Babb to the start-finish line on the next circuit to take the lead. Shortly after that, Babb retired after his right-rear suspension collapsed because he lost a right-rear shock.

Unzicker led comfortably for a few laps, but Birkhofer summoned a challenge in a rare place where most drivers run either extremely high or extremely low — the middle groove.

Unzicker hugged the inside lane with Birkhofer ran side-by-side one lane higher, edging ahead to lead lap 36. But Unzicker never fell far behind and worked back past Birkhofer on lap 39. Birkhofer lost second to Smith before a lap-41 caution for a spinning Eric Vaughan, who was caught up among the frontrunners in turn three. And four laps later, Birkhofer retired after banging the frontstretch wall and damaging his right-front suspension.

Unzicker continued out front, but the final yellow for Curtis Roberts on lap 51 set up Smith's late-race heroics. Unzicker was disappointed, but kept his focus on the big picture — he's in the hunt for the $20,000 UMP DIRTcar points title.

"It's a good end of the year deal for us with the (UMP) championship on the line there, we gained 15 points tonight with that. I'm happy about that, just a little disappointed because I gave away the Prairie Dirt Classic. I've been coming here for years trying to win it," he said. "But we elected to stay on the bottom after that restart and rightfully so. I was running down there the whole race. That's how I got the lead, so I figured it was good down there. But I don't know. He probably would've have tried the top maybe if the caution hadn't come out, but it is what it is."

Notes: Smith's Pierce Race Car is sponsored by Scharf Trucking, Pro Tire & Automotive and Grosso's Garage. ... Smith matched his career-richest victory of $10,000 in 2009 at Kamp Motor Speedway in Boswell, Ind. ... "Thanks for all the fans coming back," Smith said in victory lane, recognizing the twice-delayed event. "It's been a tough time trying to get this race in." ... Brian Shirley started third, had a flat tire on the 11th lap, and roared back into the top five (using the high groove) on lap 28 before tell-tale smoke plumed from his car, sending him to the pits. ... Dennis Erb Jr. retired during the same caution. ... Jason Feger exited after losing a driveshaft on the 21st lap, and Daren Freidman apparently caught a piece of the destruction. That mess left debris in the high groove that teams were wary off. That's why Smith's crew chief Ryan Courtney said he didn't sent his driver up there any earlier — other driver had flat tires from running high. Courtney's fear was justified as Smith's right-rear tire was flat after the race in the team's pit stall. ... Michigan driver Curtis Roberts, who started fourth but fell out of the top five after a dozen laps, pitted several times for tire changes and other fixes.