Springsteen's the boss in Deery victory at Boone 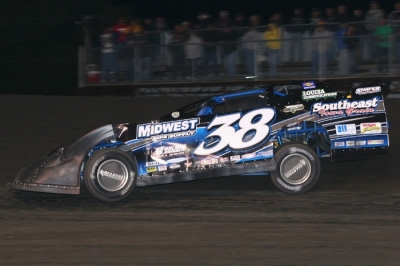 “This is the first full year we’ve followed the series. I never thought we’d be able to come and win the first time in this event,” Springsteen admitted. “It’s awesome.”

Kevin Sather chased Springsteen to the checkers and pole starter Dale Hackwell Jr. was third. Darrell DeFrance scored hard charger honors in the 23rd Super Nationals appearance of his career, advancing a dozen spots to round out the top four.

Andy Eckrich was fifth and now trails Ray Guss Jr. by three points in the race for the silver anniversary series championship.

The two-time defending Super Nationals champion, Guss qualified for the main event by winning his consolation race and moved up nine places to eighth.

Reed started outside the front row and checked out on the field from the initial green, leading by a full straightaway just seven laps into the 50-lapper.

Hackwell, then Charlie McKenna gave chase but were hardly in the same time zone before the first caution, just before midway, erased Reed’s huge lead.

Reed continued to run in front while Sather and Neal worked their way to second and third, respectively. Springsteen was in the right place at the right time to capitalize on the restart that followed Reed’s mechanical misfortune and Neal’s exit.

“I was running fourth when I started thinking I’d try the bottom and then got passed by about five cars,” Springsteen said. “I thought the bottom was the way to go, like it was in the heat races, but it was a lot faster on top.”