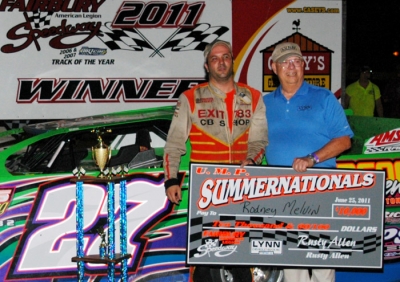 The low-running Melvin lurked behind the leaders most of the 50-lapper, but he slipped into the lead at the white flag when the high-running Feger bobbled exiting turn four. Feger regrouped and went back ahead down the backstretch, while Melvin's inside groove put him back out front exiting turn four. | Slideshow | Video

Feger roared out of turn four on the high side to catch Melvin, but officials ruled that Melvin was first to the checkers in a dramatic race that neither of the third-row-starters led until the closing laps.

"Sometimes the fastest car don't win," said the fifth-starting Melvin, who was third with two laps remaining. "You've just gotta race smart and be patient and it all works out good for you."

Feger, who initially pulled to victory lane before he was told he finished second, took the runner-up honors with seventh-starting Bobby Pierce of Oakwood, Ill., in third after leading seven of the last 10 laps. Derek Chandler of Pontiac, Ill., was fourth and polesitter Brian Shirley of Chatham, Ill., fell back to fifth after leading most of the way.

Shirley jumped into the lead at the outset, sliding in front of fellow front-row starter Ryan Unzicker on the first lap to trigger contact that crushed the front of Unzicker's car. Unzicker, who quickly fell from contention, took exception to the move and retaliated during the next caution period by ramming Shirley's machine.

But Shirley stayed in control, leading Frank Heckenast Jr. and Eric Smith early before Smith pulled out. Pierce then moved into contention on the low side and battled the high-running Heckenast before Heckenast got into wall exiting turn two, ending his run.

The low-running Pierce edged past the higher-running Shirley on lap 29, but a caution erased the move and Shirley stayed in control until Pierce went back past on lap 41. Shirley and Feger were all over Pierce with Melvin a bit further back with the top four runners all piloting Pierce Race Cars.

In the final laps, Pierce moved out of his low groove in working the slower car of Steve Thorsten, allowing Feger to make an inside move exiting turn four and lead lap 48. But when Feger slipped high out of turn two — then banged the cushion with a bobble between turns three and four — the low-running Melvin suddenly took the lead, setting up the last-lap dramatics.

"(Pierce) had a good line right there in the bottom. We came to lapped traffic and he kind of went high to go by him, and I figured he'd move back down, but he just kind of stayed there," Melvin said. "So that left the bottom open for me. We just kind of slowed up a little bit there and kind of cruised around the bottom and it worked out good for us."

Notes: Melvin's Pierce Race Car is sponsored by Melvin's Collision & Auto and Higgerson Amusement. ... The victory was Melvin's sixth on the Summernationals circuit and first since June 20, 2010, at Wilmot (Wis.) Raceway. ... Melvin competed in fewer Summernationals races than in any of the past several seasons with just four starts in 24 events. ... "We got this Pierce Car, and it's really made us get back to where we used to be," Melvin said. "I kind of was scratching my head and was thinking we were done, but I just think we need to race a little bit more and keep plugging along."