From staff and Racindirt.com reports 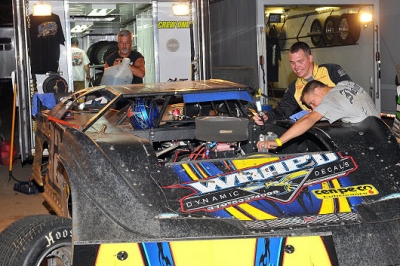 GREENWOOD, Neb. (July 22) — Chris Simpson of Oxford, Iowa, landed Saturday's pole for the inaugural Silver Dollar Nationals at I-80 Speedway with a pair of solid heat-race finishes Friday at the 4/10-mile oval.

In a unique format with two rounds of heat racing, twenty of 51 entrants earned spots in the 80-lap O'Reilly Midwest Late Model Association feature that will pay $25,000 to the winner. | Slideshow | Video

"The car was good. We've always been good here," Simpson said. "We've had a couple of bad things happen to us here the last few (visits). ... We've got this Longhorn rolling pretty good so we're excited for tomorrow."

Simpson is scheduled to start on the front row along with Don O'Neal of Martinsville, Ind., making a part-time start for Illinois-based Moring Motorsports.

They had the most combined passing points in the field following two sets of five heat races apiece that set lineups by draw straightup and then inverted, meaning drivers who started up front in the first round of heats started near the back in the second round.

Combining the passing points from each round of heats set the first 10 rows in what's expected to be a rare 34-car starting field.

Behind Simpson and O'Neal, Austin Hubbard of Seaford, Del., and home-state favorite Kyle Berck of Marquette, Neb., are locked into the second row.

While many drivers among the top 20 are making their debut at I-80 Speedway, Utter, Looney and Chad Simpson are winners of previous special events earlier this season.

Notes: Heat winners picked up $250 apiece. ... Al Purkey of Coffeyville, Kan., had engine trouble and plans to swap powerplants before Saturday's last-chance race. ... Terry Phillips piloted the No 80 normally driven by Scott Koskovich. ... Phillips, Chris Spieker and Kyle Berck all drove in both Late Model and modified divisions. ... Kelly Boen is behind the wheel of an Oklahoma-based Pannell Motorsports car. ... Kyle Berck is getting a helping hand from chassis builder Audie Swartz. ... On Saturday, the rest of the starting field will be set with six drivers transferring from consolation races. In addition, two drivers apiece from MLRA and I-80's own Super Late Model Racing Series will earn provisional starting spots, along with three guaranteed starting spots based on earlier races this season at the track. A final spot is available for auction if a driver pays at least $1,500 for the 34th spot.

First round of heats

Second round of heats