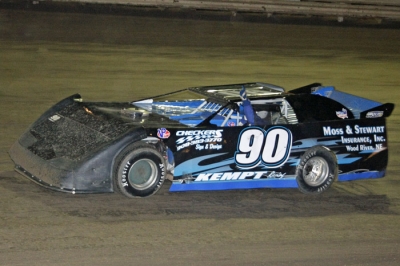 Winner Steve Kempt waves to the crowd on his cool-down lap. (Justin Sly)

BELLEVILLE, Kan. (July 3) — Polesitter Steve Kempt of Shelton, Neb., led all the way Sunday at the Belleville High Banks en route to his first career victory on the National Championship Racing Association DIRTcar Series. Kempt, who planted a kiss on his car in victory lane, earned $2,500.

Kempt, who got the jump on outside front-row starter Bill Koons Jr. of Omaha, Neb., never looked back in the caution-free 20-lapper and won by a full straightaway.

“The car worked good at the start and I could really run anywhere,” Kempt said. ”This place is hard on motors so I tried not to spin my tires, watched my gauges and just tried to pace myself. It is about time we got one of these.”

Dean Moore of Grand Junction, Colo., worked forward from his fourth starting spot to finish second while Jimmy Seagraves of Furley, Kan., was third. Shawn Harker of Plattsmouth, Neb., and Joe Kosiski of Omaha, Neb., round out the top five.

Notes: Kempt's Phil and Cindy Kempt-owned Swartz Race Car is sponsored by Moss & Stewart Insurance and Wreckers Sign & Design. ... Kempt's only previous touring series victory came Aug. 31, 2003, in IMCA-sanctioned Freisen Chevrolet Challenge Series competition at Butler County Speedway in Rising City, Neb. ... Dave Conkwright was disqualified from the first heat for being light at the scales; he was eighth in the main event. ... Next up for NCRA competitors is the Smiley's NCRA Late Model Nationals at Mid-Nebraska Speedway in Doniphan, Neb.