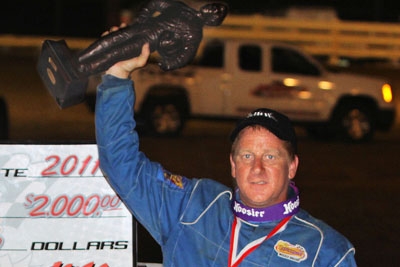 His win was good for $2,000 and just as importantly, put Neal only three points behind leader and Sunday’s third place finisher Andy Eckrich.

The victory was also the tour career 19th for Neal, the 2005 Deery champion, and his first in the series since July 1, 2009. He’d finished second six times and run in the top five in 17 of 34 main event starts since taking the checkers at Independence Motor Speedway.

Murphy drew the outside row one start and stayed in front through a series of cautions that slowed the first six laps. He exited with mechanical issues after the last of those early yellows.

Neal took over from that point, pulling away from the rest of the field and leading the rest of the 40-lapper. Yellows at midway and again with nine laps left brought the pack back together but no one could catch up to Neal

Denny Woodworth worked his way up to second before getting caught up with a lapped car. Ja son Perry then did a stint in second before he broke.

Defending series champion Ray Guss Jr. ended the night as runner-up, a couple car lengths be hind Neal, moving from fifth to third in the standings as well. Jay Johnson was fourth and Nate Beuseling turned in a strong finish in fifth.

The ninth event of the silver anniversary series is scheduled for July 7 at West Liberty (Iowa) Raceway.