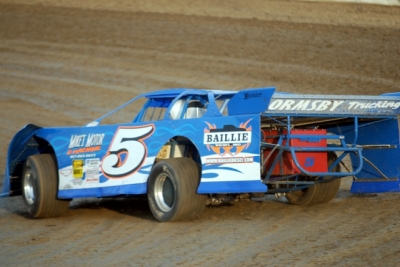 Essary, who took the lead on the 13th lap, had to be careful in the second half of the race because his No. 5 was having brake problems. | Slideshow

“The first part of the race went pretty good,” Essary aid. “With about 10 or 12 laps to go, a shock pin broke on the left front and broke the brakeline, so the last 10 or 12 laps was kind of a handful to get around there.”

Series points leader Justin Wells of Aurora, Mo., rallied from his 10th starting spot to finish second as he and 12th-starting Ken Essary of Cape Fair, Mo., the winner's father, used the high side to make up ground late in the race. Larry Campbell of Van Buren, Ark., ran as high as second before setting for fourth and polesitter Rex Merritt of Billings, Mo., led 12 laps and rounded out the top five.

The 30-lapper was slowed by a single caution for Kyle Ledford's turn-two spin on the seventh lap.

Notes: Essary's GRT Race Car has a Mike's Motor & Machine powerplant and sponsorship from Baillie Diesel. ... Jimmy Greenway is competing as Essary's teammate. ... Next up for Show-Me Racin' Series competitors is a June 10-11 doubleheader in Oklahoma, starting at Thunderbird Speedway in Muskogee and moving to Creek County Speedway in Sapulpa for the first series visit to the track.