Eckrich's Boone victory makes two in a row on tour 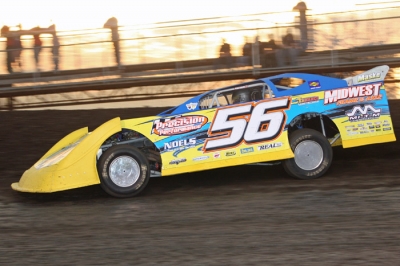 BOONE, Iowa (May 30) — Andy Eckrich has started to make a hobby of dominating Deery Brothers Summer Series features. The Iowa City, Iowa, driver led all 40 laps in winning the Memorial Day event at Boone Speedway, a race that ended before 8:30 p.m. as the track rushed to beat threatening weather. | Slideshow

The $2,000 victory was Eckrich's second straight in the silver anniversary season of the IMCA-sanctioned tour and came on the heels of an equally impressive 50-lap, flag-to-flag run on May 17 at Marshalltown Speedway.

Eckrich went to the top groove, held onto the front spot following a series of early restarts and caught up with the back of the pack on lap 26. Darbyshire ran second most of the way before giving way to Guss with five laps to go. Guss used lapped traffic to catch up but couldn’t get any closer than Eckrich’s back bumper.