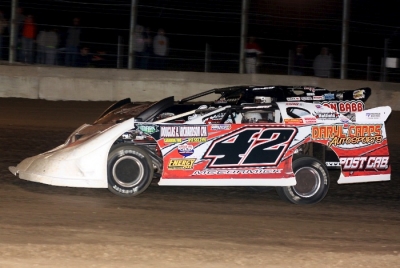 McCormick, a semi-regular on the MARS circuit for more than 10 seasons, took the lead before the halfway point and held off challenges from reigning MARS champion Terry Phillips of Springfield, Mo., for his first series victory. | Sidebar | Slideshow

Phillips settled for second while Lebanon driver Tony Jackson Jr. was third. Eric Turner of Springfield, Mo., driving McCormick's backup car, finished fourth and track veteran Randy Zimmerman of Fort Scott, Kan., rounded out the top five. Jeremy Payne of Springfield, a teammate to Phillips, started on the pole but ended up 14th after a flat tire knocked him from contention. Brad Looney of Republic, Mo., was out front when a flat tire sent him pitside, handing the lead to McCormick.