Ruhlman gets third ALMS victory at I-96 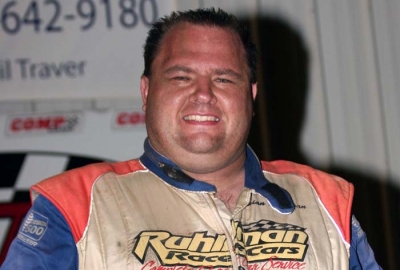 LAKE ODESSA, Mich. (Aug. 21) — Brian Ruhlman of Clarklake, Mich., solidified his series points lead Saturday at I-96 Speedway with his third victory of the season on the Sunoco American Late Model Series. Ruhlman earned $2,000 for the victory on the facility’s 3/8-mile oval. | Slideshow

Canadian invader Andrew Reaume of Blenheim, Ontario, was second while Jeep Van Wormer of Pinconning, Mich., who was leading on lap 23 when he briefly slipped off the track turn one, ended up third in his quest for his second series victory of the season at I-96. Winningest ALMS driver Kris Patterson of St. Johns, Mich., was fourth and outside front-row starter Devin Shiels of Britton, Mich., rounded out the top five. Rusty Schlenk of Jackson, Mich., second in series points, finished 20th.

“I was watching Jeep run the top, and I knew that he would have to be really careful up there,“ Ruhlman said. ”I knew I could not pass him, so when he made his mistake, I was glad I was running second."

Polesitter Brandon Thirlby took the lead at the outset of the 30-lap feature and led the 22-car field through the first 11 laps. The seventh-starting Van Wormer was up to second for a lap-11 restart and took command before a caution slowed the action again on lap 13.

Van Wormer edged away on the restart and was in control when he got over the turn-one banking, allowing Ruhlman to take command. Van Wormer gathered his car up and rejoined the race in third behind Ruhlman and Reaume, who was looking for his first series victory.

“I was not sure who that was at first that showed me their front end,” Ruhlman said. “Once I saw that it was Andrew, I knew he was going to run me clean, and he did. He is a good kid and he has been running good."

Notes: Ruhlman’s Malcuit-powered Rocket Chassis is sponsored by Ruhlman Race Cars and Allstar Performance. ... Spicing the race was a lap-13 accident between turns one and two involving Ryan Vanderveen, Josh Scott and Chris Keller. Vanderveen, who had been dueling earlier in the race with Bill Bray, was walking back to the pits when he doubled-back to the frontstretch and briefly walked onto the hood of Bray’s car, putting him out of the race. Officials are considering potential disciplinary action against Vanderveen, series director Sam Driggers said. ... Next up for ALMS competitors is the $4,600-to-win Lane 46 at Hartford (Mich.) Motor Speedway on Aug. 27; the race pays at least $460 to every feature start, a series-best payofff.