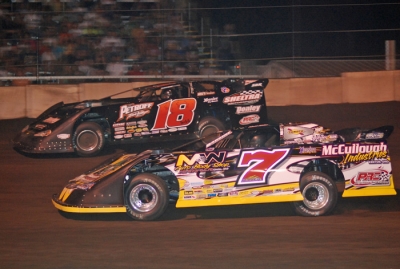 Shannon Babb (18) gets the jump on the first lap. (DirtonDirt.com)

FAIRBURY, Ill. (July 10) — After Shannon Babb broke a 12-race dry spell on the UMP DIRTcar Summernationals on Saturday at Fairbury American Legion Speedway, he was plenty patient with a dozen photographers clicking their shutters in victory lane.

“Take a good picture,” Babb told the photographers, “because it’s been a while.” | Complete Summernationals coverage

The 36-year-old driver from Moweaqua, Ill., ended his drought with dominance by leading all 50 laps at the quarter-mile, black dirt oval after starting outside the front row. Babb got an overwhelming jump on polesitter Matt Miller of Waterville, Ohio, and raced to his third series victory of 2010 on a night when the drivers filtered into the single-file middle groove midway through the race.

“This place, over the years I’ve seen that before,” said Babb, who earned $10,000 for his 62nd career series victory. “But like I’ve said, everything’s gotta go your way. Hell, that could’ve been anybody on the front row and did that. You’ve just gotta finish.”

Babb, whose last series victory came June 24 at Shepp’s Speedway in Alexander, Ill., shook off a streak of tough finishes that included tearing up his car’s rear end (Charleston), wrecking with Feger (I-55) and a cushion-jumping miscue that cost him a victory (Macon).

Babb built a half-straightaway lead on Miller after 10 laps, saw that margin erased in lapped traffic, but then built a full straightaway lead before the rubber strip developed in the middle groove, sending drivers into single-file order the rest of the way.

Miller followed Babb — who was following a pair of lapped cars — into the second half of the race, but there wasn’t enough traction high or low to make a move.

“I think I had a car that was a little more maneuverable in traffic,” said Miller, whose runner-up finish was his best on the series after three fifth-place performances. "I think we went a little softer on tires. ... that’s why in the rubber he was a little bit better than I was, and at the end there, I was struggling in the rubber. I really think we could’ve put on a good show for the fans.”

Ryan Unzicker of El Paso, Ill., was third followed by Feger and Jeep Van Wormer of Pinconning, Mich., who rallied from his 12th starting spot. Sixth-starting Steve Lance of Cuba, Ill., raced up to second on lap four, but later faded and ended up ninth.

Erb was running eighth in the single-file line when a flat right-rear tire forced him into the infield for a tire change. He returned after the race’s lone caution to finish 14th.

Third-starting Doug Drown of Wooster, Ohio, was running fifth when he pulled to the infield with a flat tire on lap 28.

Feger’s up-and-down series was mirrored on a night when he qualified poorly but rebounded with a heat-race rally and strong charge in the feature.

“Once you get behind the 8-ball in one of these deals, it’s hard to get back on top of it,” Feger said. “And we were able to do it, and that’s what we needed to do. Dennis had some bad luck, so that doesn’t hurt either.”

Outside front-row starter Brandon Sheppard swept around the outside of polesitter Derek Chandler on the third lap and led the rest of the 12-lapper. Seventh-starting Mark Burgtorf rallied on the low side to get the second and final transfer spot. Eric Smith ran side by side with Burgtorf much of the race but settled for third. The race was slowed by a frontstretch pileup in the early laps that eliminated Jim Moon, Chris Dick, C-Main winner Brian Shirley and Aaron Ricketts. Shirley and Ricketts plans to make repairs because both received provisionals for the main event. Shirley gets the series provisional and Ricketts gets the track provisional. Fourth-finishing Frank Heckenast Jr. gets the provisional based on '09 UMP points.

The C-Main lineup. Jay Sparks and Rodney Melvin (in line for a series provisional) are among expected scratches. The top four finishers transfer to the B-Main:

In a redraw among heat race winners, Matt Miller starts on the pole with Shannon Babb alongside. Doug Drown and Ryan Unzicker makde up the second row.

Polesitter Matt Miller ran steady and smooth in the low groove all 10 laps for a victory in the final heat. Dennis Erb Jr. chased him in second virtually all the way while Jeep Van Wormer (low) and Eric Smith (high) had a tight battle for third. Smith, however, gave up the high groove on a lap-eight restart, opening the door for ninth-starting Jason Feger to sweep around for the final transfer spot. Smith was fifth. Two yellows slowed the action. Chris Dick and Eric Vaughan spun in turn four to draw a lap-two caution, and Mike Glasscock got lightly into the turn-one wall on lap eight.

Third-starting Doug Drown (running high) and polesitter Scott Bull (low) waged a race-long side-by-side battle with Drown edging ahead at the finish. Bull was second while outside front-row starter Jack Sullivan was third. Joe Harlan got the fourth and final transfer spot. Steve Thorsten was part of a first-lap scramble that caused a complete restart, then was black-flagged when he spun in turn one on the second lap for his second caution.

With front-row starters Bob Freeburg and Billy Moyer Jr. struggling, third-starting Shannon Babb and fifth-starting Steve Lance Jr. filled the void up front, running away from the field in a two-car battle for the lead (Babb high, Lance low). Babb held on for the 10-lap victory while Lance was second. Moyer recovered to finish third while Jay Morris won a tight battle for the fourth and final transfer spot with Brandon Sheppard. Sheppard's right front climbed the left rear of Morris as they took the checkered flag. Brian Shirley struggled, nearly spinning on the third lap and dropping to the tail; he ended up eighth. The polesitting Freeburg nearly got into the turn-two wall on the first lap and faded badly. Jim Moon spun in turn one to draw a lap-two yellow.

Polesitter Ryan Unzicker survived a scrape on a restart and led all 10 laps for the victory. Seventh-starting Kevin Weaver, mired back in the pack early, rallied to second in the low groove while ninth-starting Mike Glynn got third. Daren Friedman started outside the front row and ran second early but got too high on more than one occasion and ended up fourth. Fourth-starting Rodney Melvin was up to second by running the low groove, but he got into Unzicker on a lap-four restart at the orange restrart tire in turn four, shoving Melvin's nosepiece under his front tires so he couldn't steer; Melvin pulled to the pits. Three other yellows also slowed the action. Snooky Dehm spun in turn one to draw a lap-three caution, and a lap-four caution appeared for debris in turn three. Another caution for debris appeared on lap five when Dillan White's spoiler flew off in turn four; White restarted third on lap five but faded badly after getting out of shape exiting turn two.

The same engine problems that cropped up last week for Jack Sullivan have returned — a pinhole crack that needs to be filled with J-B Weld. Sullivan recognized similar symptons as before, but he’s trying to limp through the rest of the night with the team’s lone functioning powerplant. “I’m scared to take it all apart right before a heat race,” Sullivan said. ... Sullivan is among several teams pitting in a grove of enormous oak trees on the Fairbury fairgrounds half-mile outside turn three of the racetrack. Jeep Van Wormer, Jason Feger, Richie Hedrick, Dennis Erb Jr. and other teams are clustered in the area that provides cooling shade. Van Wormer was a little disappointed that Dillan White’s team slipped into his favorite spot, but he pulled up close to White’s hauler. “I just crowded him — just like when I’m racing,” Van Wormer said with a laugh. ... Young Michigan driver Brandon Thirlby is having problems getting fuel to his engine as the carburetor keeps “loading up” and preventing his car from running smoothly when he starts a race. “It runs great when it gets going, but by then it’s a been a lap and a half,” said Thirlby, who had made four of 21 feature races. “I’m already at a handicap against these guys. ... UMP officials are feeling for Sam Driggers, the series director who is driving to be with his sister, who has been in hospice care while in the late stages of cancer. “He’s really, really close with his sister,” UMP's Theresa Conroy said, adding that the 52-year-old Driggers came to her hotel room earlier in the afternoon to tell her he’d gotten word to come to Florida as soon as possible.

Ryan Unzicker of El Paso, Ill., set fast time among 41 qualifiers Saturday at Fairbury American Legion Speedway for the 22nd event on the month-long UMP DIRTcar Summernationals. Unzicker’s time of 13.02 seconds gives him the pole position for the first heat race at the quarter-mile, black dirt oval in central Illinois.

Three-time and defending series champion Dennis Erb Jr. of Carpentersville, Ill., enters the event with a 13-point lead on Jason Feger of Bloomington, Ill., who won Friday’s event at Tri-City Speedway in Granite City, Ill. Forty-one drivers are signed in at Fairbury. ... Long-time UMP series director Sam Driggers is driving to St. Augustine, Fla., to see his older sister Joan, who has taken a turn for the worse in her battle with cancer. UMP’s Jim Magill has joined Summernationals officials Theresa Conroy and Scott Davies on the tour, and Conroy asked drivers at Fairbury’s pre-race meeting for cooperation with Driggers’ absence. Driggers has officiated most Summernationals events since the early ‘90s. ... Kevin Weaver is back in his own No. B12 after driving Randy Korte’s No. 00 Friday at Tri-City. ... Jimmy Dehm enters the event fresh off his first Late Model victory Friday at Kankakee County (Ill.) Speedway. ... Among drivers making their first series starts of 2010: Bob Freeburg of Metamora, Ill.; Mike Glynn of La Salle, Ill.; and Mike Glasscock of LeRoy, Ill. ... Last year’s series winner Billy Moyer of Batesville, Ark., is a no-show, but he’s had success on the tour, winning six of seven races he’s entered with two streaks of three straight victories. ... Fast qualifier Ryan Unzicker and Jeep Van Wormer were among teams who had to do engine swaps overnight after Tri-City.