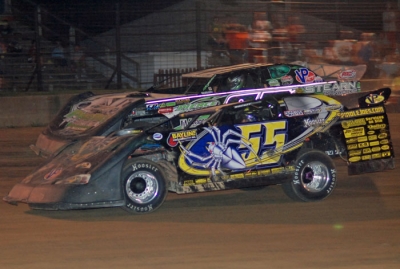 Van Wormer cruised most of the way, building a full straightaway lead at the halfway point at the third-mile oval, keeping a cushion of lapped cars between him and outside front-row starter Jason Feger of Bloomington, Ill. As a rubber strip developed in the low groove in the second half of the race, Feger cut into Van Wormer’s lead and was right on him in the waning laps. | Complete Summernationals coverage

But Feger’s peeks underneath Van Wormer was fruitless as the winner pumped his left fist in the air while taking the checkered flag in the fourth-ever series event at the track.

Feger settled for second place for the fourth time on the series while seventh-starting Jack Sullivan of Greenbrier, Ark., was third. Series points leader Dennis Erb Jr. of Carpentersville, Ill., improved from ninth to fourth and Billy Moyer Jr. of Batesville, Ark., who slipped by Feger to run second for a few laps early in the race, rounded out the top five.

Van Wormer pocketed $5,000 for his 14th career Summernationals victory, which is tied for seventh all-time with Erb and Hall of Fame driver Bob Pierce. Van Wormer’s previous 2010 victories came June 21 at Vermilion County Speedway in Danville, Ill., and June 29 at I-96 Speedway in Lake Odessa, Mich.

The winner edged away from a Moyer-Feger battle for second in the early laps, slipping out to a half-straightaway lead by the 10th lap as every remaining competitor ran all over the track. Sullivan and Erb headed for the front with Sullivan working on Michael Kloos through the early laps before taking the fifth spot, and Erb working Scott Schmitt several laps before taking seventh.

Van Wormer had few problems up front, putting slower cars a lap down by the 15th lap and keeping a cushion of lapped cars most of the rest of the way. Drivers filtered down into the rubbered low groove in the second half of the race as drivers staying high on the banking lost traction.

Van Wormer was running the hub when Feger found clear racetrack between them on lap 32, and Feger pulled up on Van Wormer’s rear deck a few laps later. Feger look a couple of looks underneath Van Wormer, but never made a serious bid for the lead in posting his fourth runner-up finish on the series. Sullivan was third while Erb made one of the last outside-groove passes of the night in dropping Moyer to fifth in the race’s late stages

Van Wormer's victory moved him into a tie for second in the $25,000 title chase. Erb leads with 1,216 points while Feger and Van Wormer are second with 1,193 points apiece. Shannon Babb, who led the points earlier in the series, is fourth at 1,163.

Notes: Van Wormer’s Iron Motorsports Rocket Chassis is sponsored by Bayline Fire Protection and Globe Technologies. ... Clay Baumann, who started sixth in the main event while running a crate engine against unlimited powerplants, pulled off the track at the outset of the race. ... Brian Shirley pulled to the infield after getting lapped midway through the feature. ... Dan Jacober and then Mike Hammerlee headed to the infield a few laps later. ... Seventeen of 21 starters were running at the finish.

Outside front-row starter Kevin Weaver took the lead from the outset and won the 12-lapper over polesitter Nick Lyons. Lyons fell back early but made a late charge and was just a few feet shy of Weaver at the stripe. Both drivers advance to the main event. Sixth-starting Jim Moon pressured Lyons for second midway through the race but faded and settled for third. Brian Shirley scratched from the lineup, but he was in line for a series provisional. Mike Hammerle, who finished 10th, should also be in line for a provisional based on '09 UMP points. There's an intermission following the B-Main.

Polesitter Jeep Van Wormer rode the high groove to victory in the final 10-lapper. Outside front-row starter Michael Kloos used the low line and hung with Van Wormer after a mid-race restart, but settled for second. Tail-starting Dan Jacober got up to third at the white flag, but Jason McBride worked back ahead to get the third spot and Jacober settled for fourth. Brian Shirley had the third spot in hand when his air cleaner flew off in turn three just before halfway.

Running the high groove to outgun polesitter Jack Sullivan early, outside front-row starter Brandon Sheppard took the long way around to victory in the caution-free 10-lapper. Sullivan joined Sheppard high for a few laps but couldn't keep up and retreated back to the low groove, finishing second. Sixth-starting Chad Zobrist rallied to finish third just behind Sullivan while a high-running Ken Schrader got the fourth and final transfer spot. Frankie Martin was a distant fifth. Tail-starting Dillan White, who missed qualifying because the car's solenoid burned out the ignition wiring, made repairs and finished seventh.

Repelling a challenge from fifth-starting Clay Baumann and his crate-powered car, Jason Feger got rolling on the high side the final three laps for the victory. Baumann, creeping along the low groove while taking advantage of a dry, slick track, led the sixth lap, but Feger moved up a bit higher and moved back into the lead. Outside front-row starter Rodney Melvin was third while Ryan Unzicker worked the outside of Kevin Weaver to get the fourth and final transfer spot.

Outside front-row starter Billy Moyer Jr. broke away from a four-car battle for the lead on the first few laps and cruised to victory in a 10-lap prelim. Moyer Jr., Dennis Erb Jr., and polesitter Scott Schmitt were three-wide exiting turn-four on the first lap — with Shannon Babb threatening to make it four-wide — but Moyer edged away by the halfway point. The fast-qualifying Schmitt nearly fell back to fourth, but after fighting off Babb, he worked around Erb for a last-lap pass to finish second. Erb was third and Babb fourth for the final transfer spot. Nick Lyons was a distant fifth.

Scott Schmitt of Tonica, Ill., topped 32 qualifiers Tuesday at Fayette County Speedway in the 19th race of the month-long UMP DIRTcar Summernationals. Schmitt posted a lap of 13.660 seconds at the third-mile oval to earn the pole for the first heat race.

The top four finishers from each of four heat races will transfer to the main event. The top two finishers from the B-Main will also transfer and three provisional starters will round out the 21-car field. The nights’ 40-lap feature pays $5,000 to the winner.

The electronic timing clock didn’t pick up several cars in time trials, causing a series of brief delays. ... Drivers are fresh off the first scheduled day off on the series on the month-long tour. ... Three-time and defending tour champion Dennis Erb Jr. leads the series with 1,146 points over Jason Feger (1,113), Shannon Babb (1,111) and Jeep Van Wormer (1,108). Erb won the last series race at Fayette County in 2006. ... The series lost its first race Sunday at Lincoln (Ill.) Speedway, when rain hit just as the feature race began. That feature has been rescheduled for July 25 but won’t count toward series points.