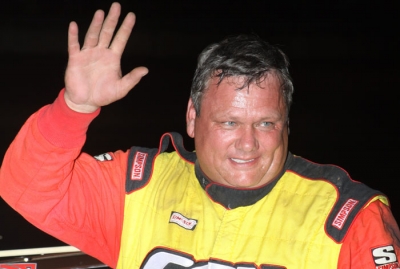 Babb stormed from a straightaway behind over the final 10 laps, twice pulling alongside O’Neal but failing to make the pass on the sprint-car track with a narrow black-slick groove alongside a rugged cushion. | Complete Summernationals coverage

O’Neal, who banged the turn-four cushion so hard on the 35th lap that he nearly lost control, soldiered through the final five of 40 laps at the 5/16-mile oval for his third victory in his last four starts on the 29-race Summernationals. O’Neal, the 2004 series champion running only select races this year, earned $5,000 in his Moring Motorsports No. 1.

“I saw Babb get underneath there, and I knew I had to get back up on that wheel. I had sort of slacked off running on that cushion because it was so hard on things, but I had to get back up there and let ‘er eat for two more laps,” said O’Neal, who notched his 38th career Summernationals victory. “It’s just one of them deals — you try to survive and be fast, too.”

Babb’s harder right-rear tire was heating up while O’Neal’s softer rubber was giving up late, and the runner-up nearly took advantage of cushion-caused bobbles by the leader in the final laps. “If he bounced one more time,” the Moweaqua, Ill., driver said, "we’d have probably been around him.”

Despite the loss, Babb extended his series points lead over the tour regulars in pursuit of the $25,000 championship that wraps up July 17 at Oakshade Raceway in Wauseon, Ohio.

Jason Feger of Bloomington, Ill., was just behind the top two in third while outside front-row starter Jeep Van Wormer was further back in fourth. Dennis Erb Jr. of Carpentersville, Ill., rallied from 11th to round out the top five.

O’Neal jumped into the early lead, pulling a straightaway ahead and lapping cars before a lap-seven caution for Jim Moon’s spin between turns three and four that collected Rusty Schlenk and Jason McBride.

A lap-11 caution for a slowing Chad Stapleton slowed O’Neal’s progress again, but the race went green the rest of the way with O’Neal holding nearly a full straightaway lead on Van Wormer at the halfway point. O’Neal had clear racetrack for the next 10 laps while Babb fought his way past Van Wormer, who gamely tried to answer Babb’s move.

With 10 laps remaining, O’Neal was a straightaway ahead and cruising. But the combination of Babb’s charge, a few lapped cars and O’Neal’s miscues in running the cushion put Babb right in the mix with five laps remaining. Twice he pulled alongside entering turn one, but O’Neal halted the charge and edged back ahead in the final laps.

Notes: The winning MasterSbilt Race Car is sponsored by Freeport Recycling Center and MDI Environmental Systems. ... O’Neal hasn’t run the Summernationals regularly in recent years, but his 2010 streak of three victories over four starts is one of the best of his career. He won four in a row during his 2004 championship season. ... Steve Casebolt of Richmond, Ind., racing at Putnamville because it’s just 15 miles from the Coatesville, Ind., headquarters of his sponsor Dixie Chopper, started third and ended up seventh. ... Dillan White pulled to the infield with a flat left-rear tire on the fifth lap. ... Battery problems forced Ryan Unzicker out before the 10-lap mark. ... Consolation winner Jack Sullivan started 16th and finished ninth. ... The series is northward bound Tuesday for a $5,000-to-win event on the half-mile I-96 Speedway in Lake Odessa, Mich.

Polesitter Jack Sullivan cruised to a victory over fellow front-row starter Jason McBride in the 12-lapper. The battle for the third and final transfer spot was a tight one with Jim Moon and Marty O'Neal swapping the spot several times before Moon secured the spot on the final lap. Early cautions appeared when Josh Scott went over the turn-two banking, and later when Kenny Carmichael and Bob Robinson spun separately in the same turn. Three non-transferring drivers got provisionals: Brandon Thirlby (series points), Rusty Schlenk ('09 UMP points) and Kenny Carmichael (track).

In the draw among heat winners, Don O'Neal will be on the pole for the main event with Jeep Van Wormer alongside. Steve Casebolt starts third in the 40-lap feature. ... Officials took a grader onto the track following modified heat races to scrape off the tall cushion.

Polesitter Don O'Neal took the lead when Chad Stapleton jumped the turn-two cushion on the third lap and held off Rodney Melvin the rest of the way as the top two drivers broke away from the field. Melvin also got hung up on a deep cushion on the final lap to fall further behind O'Neal, but he secured the second spot. Richie Hedrick was more than a straightaway behind Melvin in third while Stapleton recovered from problems from a wild third lap to run fourth the rest of the way. Donny Walden got the fifth and final transfer spot. Three starts were required to get the race going. Mitchell Lankford's first-lap spin in turn three forced the first restart, while a Richie Hedrick-Marty O'Neal tangle in turn one spoiled the second attempted start.

Outside front-row starter Steve Casebolt jumped into the lead over polesitter Jason Feger, who joined him on the high side midway through the race with occasional peeks in the low groove. Feger settled for second, a few lengths back, while Ryan Unzicker was third after holding off Dennis Erb Jr. Further back, Brandon Sheppard got the fifth and final transfer spot, pulling away late from Jack Sullivan in the caution-free prelim.

Polesitter Jeep Van Wormer pulled away from a rallying Shannon Babb on a mid-race restart and cruised to victory in the first heat. The low-running Babb, who started fifth after a sub-par qualifying effort, finishing a half-straight back in second. Dillan White, Billy Moyer and Marty Cooper got the other three transfer spots. Outside front-row starter Rusty Schlenk was running third midway through the 10-lapper but pulled to the pits just as Bob Robinson spun in turn two to draw a caution; Robinson also pulled off the track. During the mid-race caution period, officials worked on brace that came loose in the rear of Van Wormer's car; after trying to remove it, they eventually forced it back into position.

Don O’Neal of Martinsville, Ind., winner of two of the past three UMP DIRTcar Summernationals events, was fastest among 27 qualifiers Monday for the tour’s 13th leg at Lincoln Park Speedway. O’Neal turned a lap of 12.947 seconds, one of just two drivers under the 13-second mark at the 5/16-mile oval, to earn the pole position for the third heat.

The top five finishers from each of three heat races will transfer to the main event with the heat winners drawing for the top three spots. A consolation race will transfer three drivers and three provisionals will round out the 21-car field. The night’s 40-lap feature is scheduled to pay $5,000 to the winner at the sprint-car stronghold, a track that hasn’t hosted a Late Model event since 2003.

Series points leader Shannon Babb of Moweaqua, Ill., holds a 10-point margin on Dennis Erb Jr. of Carptentersville, Ill., heading into the night’s action. ... John Gill of Mitchell, Ind., won the previous Late Model race at Lincoln Park on Aug. 2, 2003. The Northern Allstars race was halted by rain after nine laps but declared official. None of the 19 starters in that event entered the Summernationals race. ... Before 2003, Lincoln Park hadn’t hosted a Late Model event since 1995. ... Billy Moyer, the father of entrant Billy Moyer Jr., won a 1986 race at Lincoln Park. ... Donny Walden missed Saturday’s race in Clarksville, Tenn., but rejoined the tour Sunday after buying a rear end from Shannon Babb. “I was just going to call it quits, but my dad and uncle wouldn’t let me,” said the 26-year-old from Towanda, Ill. ... Kenny Carmichael is also competing in the super stock division; he’s a multitime champion in non-Late Model divisions at Lincoln Park. ... The 27 cars is a series-low, one fewer than Sunday at Tri-State Speedway in Haubstadt, Ind. Only one event in 2009 drew fewer than 30 cars, the second-to-last series event at Waynesfield, Ohio.