Chad Simpson 4-for-4 after victory at Cresco 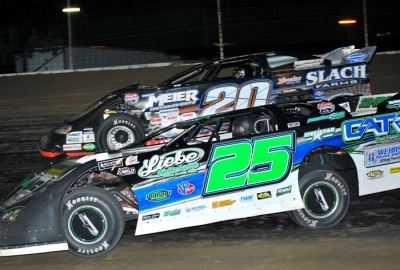 Jeff Aikey of Waterloo, Iowa, was second followed by Meier of Tipton, Iowa, who took the early lead after a series of yellow flags. The winner’s brother, Chris Simpson of Oxford, Iowa, rallied from his 17th starting spot to finish fourth and Lance Matthees of Winona, Minn., rounded out the top five. Outside front-row starter Jason Rauen of Farley, Iowa, held the second spot on the 22nd lap but spun out of contention, drawing the a pivotal caution.

That set up a restart with Meier out front and a double-file row made up of Aikey-Chad Simpson. Simpson disposed of Aikey and when powered underneath Meier to take command on lap 25. He survived two late-race restarts for the victory.

Notes: Chad Simpson's MasterSbilt Race Car is sponsored by Liebe Trucking, GATR Volvo-GMC, Farm Bureau Financial Services and Five Star Shop Service. ... The race was a makeup of a May 13 rainout. ... The series heads to Farley (Iowa) Speedway on Friday for a makeup of a May 17 rainout.