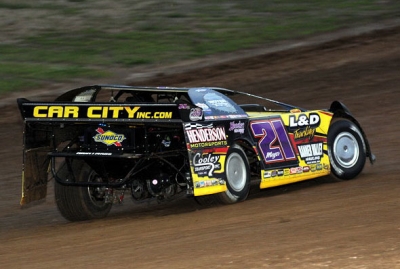 Billy Moyer tunes up in his debut at Thunder Hill. (fasttrackphotos.net)

MAYETTA, Kan. (May 22) — It's been a while since Hall of Famer Billy Moyer has competed in two weekend events on the Lucas Oil Midwest LateModel Racing Association, the 21-year-old tour the Batesville, Ark., ran with frequently in the early 1990s. It's been even longer since he swept an MLRA weekend. | Slideshow | Video

Moyer, third on MLRA's all-time victories list with 36, has run sparingly with the tour the past 15 seasons and hadn't swept a series weekend since winning the first two races of the 1994 season on April 22-23 at Pocahontas (Ark.) Speedway and West Plains (Mo.) Motor Speedway.

While the 52-year-old Moyer dominated most of Friday's race at Sedalia, he had more work to do at Thunderhill, rallying from his eighth starting spot while Simpson threatened to lead flag-to-flag after jumping out to a lead over Terry Phillips, Dave Eckrich and Al Purkey.

But Moyer began picking off competitors on his way to the front, reaching third behind Simpson and Phillips. But on a late restart, Moyer quickly dispatched of Phillips and, a few laps later, used the high groove to sweep past Simpson.

Two more late yellows gave Simpson a chance to answer Moyer's move, but he couldn't find a way past in settling for second. Phillips, of Springfield, Mo., was third followed by John Anderson of Omaha, Neb., and Eckrich, of Cosgrove, Iowa.

Moyer was making his first career appearance at the 16-year-old track, now under the promotership of long-time MLRA competitors Mike, Dave and Dean Conkwright.

Notes: Moyer's Victory Circle Chassis is sponsored by L&D Trucking, Henderson Motorsports, Banner Valley Hauling and New Vision Graphics. ... The track drew 112 race cars overall, including 34 Late Models. ... MLRA was making its first visit to the track since 2001 (when Kyle Berck won), and Thunder Hill was hosting its first sanctioned Late Model event of any kind since the last-ever Topless Outlaw Racing Association events at the conclusion of the '08 season (Jesse Stovall swept two features). ... Thunder Hill also hosts MLRA competitors Oct. 8-9 to wrap up the 2010 season. ... Next up for MLRA is the 18th annual Dart Show-Me 100 at Lucas Oil Speedway in Wheatland, Mo., a $30,000-to-win event co-sanctioned by the Lucas Oil Late Model Dirt Series.