From UMP and track reports 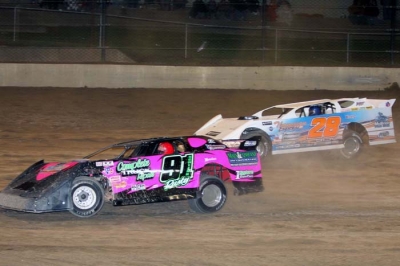 Erb, 36, started outside row two but quickly grabbed the second spot behind early leader Scott James of Lawrenceburg, Ind. Erb inherited the lead on lap seven when James was forced pitside for a mechanical issue and Erb never looked back.

“We were rolling around there pretty good,” said Erb, who turns 37 on Oct. 12. “I was trying to just float over those bumps out there.”

Erb proceeded to drive his car out to over a half-straightaway lead as he made quick work of lapped traffic.

“It feels good to come here and win this two years in a row,” Erb said. “The car just worked awesome. I have to thank everyone that has helped me and everyone for sticking this one out.”

Frank Heckenast Jr. of Orland Park, Ill., finished second followed by Chad Ruhlman of Bemus Point, N.Y. Polesitter Rusty Schlenk of Jackson, Miss., was fourth followed by Matt Miller of Waterville, Ohio. Newly-crowned UMP points champion Jason Feger of Bloomington, Ill., had a strong run going through the early part of the feature but saw a flat right-rear tire take him out of competition while running third. He finished 20th.

The race also served as the finale on the Sunoco American Late Model Series. Jon Henry of Ada, Ohio, wrapped up the championship, along with Rookie of the Year honors, with his 22nd-place finish.