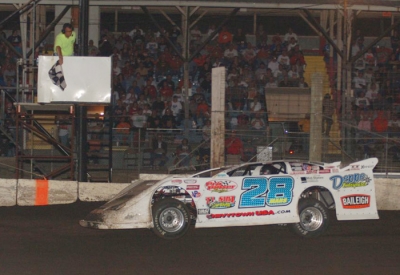 Seventh-starting Darren Miller of Milledgeville, Ill., racing for the first weekend since shutting down his team in March, finished second followed by polesitter Dennis Erb Jr. of Carpentersville, Ill. Rodney Melvin of Benton, Ill., started outside the front row and finished fourth while ninth-starting Kevin Weaver of Gibson City, Ill., the 1991 race winner, rounded out the top five.

Shannon Babb of Moweaqua, Ill., led the first 11 laps before a flat tire knocked him out of contention. Melvin then took command, leading until Mars made the winning pass on lap 36. Miller made a late charge on Mars, but the winner slipped away amid lapped traffic in the final laps.