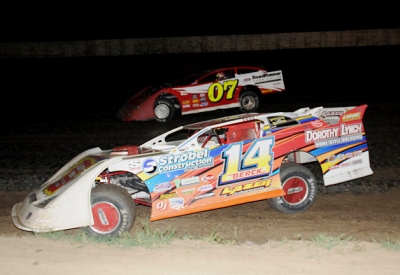 Boen, who earned his seventh NCRA victories in the last eight series races, outdueled John Anderson of Omaha, Neb., late in the race, then stayed ahead of 24th-starting Kyle Berck's late charge for the victory.

Berck, of Marquette, Neb., finished second after taking a provisional starting spot while Anderson was third in the weekend finale. Jason Bodenhamer of Centerview, Mo., was fourth and Mike Johnson of Lompoc, Calif., completed a two-week trip to the Midwest with his best finish of the journey. Bryant Goldsmith of Corning, Iowa, rallied from 21st to finish sixth.