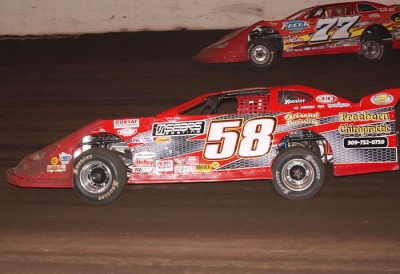 ALLISON, Iowa (July 29) – Ray Guss Jr. simply ran out of laps in his bid to win the first Deery Brothers Summer Series event of the season at Highway 3 Raceway back in May. He made it to the front in plenty of time Wednesday night.

Guss passed point leader Jeff Aikey with six laps left in the IMCA Late Model feature and then rocketed away from the field, taking the $2,000 checkers by 10 lengths. | Slideshow

The tour victory was his second of the season and career 13th. Aikey, winner of the last two Deery races and the series point leader, finished second and Terry Neal, Rob Toland and Sam Halstead rounded out the top five.

Guss had to win his consolation race to qualify for the May 20 show at Allison and wound up chasing Tommy Elston across the stripe. He won his heat race ahead of Aikey and started eighth this time around.

Al Johnson and Halstead dueled early for the lead, both giving way to Neal at midway. Aikey made his way from the 12th starting spot and zoomed around Neal on a lap 23 restart.

Guss kept Aikey is his sights however, completing a pass of his own on lap 30 as the front pair worked through lapped traffic and then pulling out to win by a comfortable margin.

Series rookie Justin Kay started last in the field of 26 and moved up 16 spots to end in 10th.

Jason Frankel went into the night second in the series standings, just 11 points behind Aikey, but broke in his heat race and again early in the feature to fall further off the pace. Jay Johnson, sixth in points, was also a casualty in the main event.

The third and final night of the Deery Series tripleheader is Thursday at Jackson County Speedway in Maquoketa, Iowa.