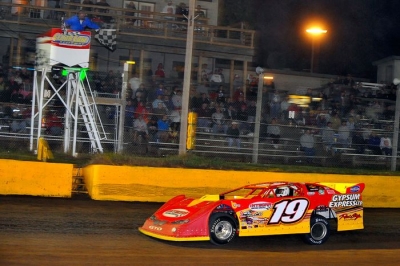 McCreadie pulled within a few lengths of Fuller with 10 laps remaining, but Fuller edged away to complete his victory at the 3/8-mile oval, his first-ever victory in Wisconsin.

McCreadie was second just ahead of third-starting Jimmy Mars of Menomonie, Wis., who was going for his third straight Cedar Lake victory on the WDRL circuit after two victories in June. WDRL points leader Chad Simpson of Mount Vernon, Iowa, was fourth and 20th-starting Brian Birkhofer of Muscatine, Iowa, rallied to finish fifth.

The race was slowed by two cautions, neither for serious incidents. A lap-10 yellow appeared for a slowing Denny Eckrich. Wendell Wallace slowed for a lap-15 yellow.

During the lap-10 yellow, Chris Simpson's No. 32 — sitting in the infield — was attended by the track's fire crew for a brief showing of flames under the hood.

Jason Feger of Bloomington, Ill., ran third most of the first 10 laps, but pitted under the first caution. He rallied to finish ninth.

Outside front-row starter Tim McCreadie cruised to a six-lap victory in the pole dash, topping fellow New York driver Tim Fuller by a half-straightaway. Jimmy Mars picked up one spot to finish third with Jason Feger fourth. The finish sets up the first four rows of the feature.

Polesitter Will Vaught turned back a strong first-lap challenge from Dave Eckrich for a 12-lap victory. Eckrich, who edged ahead out of turn two on the first lap after making a bold move on the low side, finished second for the other transfer spot while outside front-row starter Josh McGuire finished third. The race went caution-free, but Al Purkey was running fourth when he lost control in turn four and fell back to the rear of the field on the third lap, but he's in line for a series provisional.

Polesitter Brian Birkhofer outdueled fellow front-row starter Chris Simpson on the first lap and stretched away to a victory in the second consy. SImpson was fast enough to avoid any challenges for the second transfer spot as the runner-up while fifth-starting Jeep Van Wormer took third from Alan Mondus on the ninth lap, but couldn't gain any more ground. Fourth-starting Chad Mahder was running fourth when he spun in turn four on the fourth lap. Lee Thomason spun on the lap-four restart to draw the second and final yellow.

Polesitter Rick Aukland worked under fellow front-row starter Scott James to take command on the fourth lap and went on to win the first of three consolation races. James got the second and final transfer spot while Russ Scheffler was third, just ahead of Pat Doar and Denny Eckrich in the caution-free 12-lapper.

Driving harder into the corners than anyone else, fourth-starting Jimmy Mars made an outside move on Bill Frye on the third lap and never looked back. He's funning for his third straight WDRL victory at Cedar Lake. Frye couldn't keep up but held on to finish second, more than a straightaway behind the winner. Third-starting Chris SImpson took third from Jason Utter on the seventh lap, and two-time USA Nationals winner Rick Aukland dropped Utter to fifth on the final lap. A caution spoiled the first start when Dan Shelliam got into the frontstretch wall just past the flagstand; his No. 16 suffered significant right-side damage and was towed off the track.

Polesitter Terry Phillips led all the way in the 10-lapper with fellow front-row starter Chris Madden a half-straight back in second. Fourth-starting Brian Birkhofer got rolling late, taking third from Rodney Melvin on the seventh lap but failing to gain on Madden in the closing laps. Seventh-starting Matt Miller, gunning for his third straight WDRL victory, slipped under Melvin for fourth in the closing laps. Third-starting Terry Casey was running third early but lost three spots when he scraped the turn-one wall on the third lap; he pulled to the infield before the checkers fell.

Winning a two-car battle with Chad Simpson, Billy Moyer became the first winner from the pole in the fifth heat. The fourth-starting Simpson pressured Moyer throughout, pulling alongside on the backstretch on lap seven, but Moyer held on as they pulled more than a half-straightaway ahead of the field. Fifth-starting Ashley Anderson was third with Adam Hensel rallying from outside the fourth row to finish fourth. Front-row starter Scott Gilberts slipped back to fifth in the caution-free prelim.

Becoming the second Wisconsin driver to win a heat, Nick Anvelink started outside the front row and led all the way. Third-starting Dennis Erb Jr. hung with Anvelink but never made a serious bid for the lead while polesitter Russ Scheffler was third in the race slowed by three cautions. Division rookie Alan Mondus was a close fourth and John Anderson rebounded from an early spin to finish fifth. Although Anderson kept his car rolling after a spin between turns one and two, a caution appeared on the second lap. Anderson had been racing tightly with Clint Smith. Smith, who appeared to have a broken left-front suspension, spun in turn three while battling Mondus for a lap-three caution. Bill Koons drew a lap-eight caution in turn four.

Taking the lead on the fourth lap after polesitter Wendell Wallace dropped to the low groove, third-starting Tim Fuller swept around on the frontstretch and cruised to a 10-lap victory. Wallace, who stayed high except for a few laps after a lap-two restart, was nearly a straightaway back in second. Fifth-starting Brady Smith pressured the leaders early before dropping back to settle for third while Scott James was fourth, one spot better than fifth-fastest overall qualifier Jeep Van Wormer. Dustin Hapka, who started outside the front row, jumped the cushion in turn three and stopped at the wall for a turn-two caution; he pulled off the track after causing a second caution for returning to the track during the restart.

Steve Laursen, who won a recent Cedar Lake feature for his first win at the track in more than two years, led all the way from outside the front row, keeping fifth-starting Tim McCreadie at bay in a two-lap dash to the finish after a late caution. McCreadie, who lost a wheel leading last year's USA Nationals, finished a few lengths back in second in the 10-lapper with polesitter Josh McGuire in third. Third-starting Rob Moss slowed to a lap-three caution and pulled off the track; a lap-eighth caution appeared for Paul Parker's turn-two spin.

In his first visit to Cedar Lake, Feger started outside the front row and blew the field away, outrunning polesitter Chris Wall by more than a full straightaway. Will Vaught was nearly another straightaway behind in third with Pat Doar and Denny Eckrich rounding out the top five.