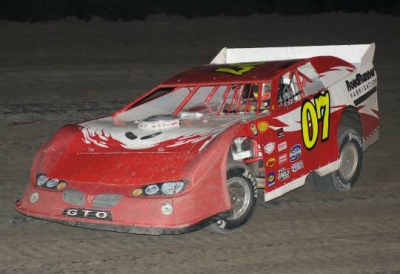 JEFFERSON, S.D. (July 24) — In a battle of five-time series champions, Kelly Boen of Henderson, Colo., outran Al Purkey of Coffeyville, Kan., at Park Jefferson Speedway for a $4,000 victory in the co-sanctioned Best of the Midwest 40. | Slideshow

Boen, the five-time and reigning NCRA champ, started outside the front row and led all the way while five-time MLRA champ and current points leader Purkey fell short. Kyle Berck of Marquette, Neb., the NCRA points leader, finished third following by Denny Eckrich of Tiffin, Iowa, and John Anderson of Omaha, Neb., who rallied from his 15th starting spot at a track where he won Late Model championships.

The event was a makeup race for a July 3 rainout and the MLRA-NCRA weekend continues Saturday at Adams County Speedway in Corning, Iowa. I-80 Speedway in Greenwood, Neb., caps the tripleheader on Sunday.

Notes: Boen's Rocket Chassis has a Jay Dickens Racing Engine and sponsorship from Road Runner Fabrication, AFCO Racing Products, Intensitee Custom Racewear and RaceWise Dirt Track Chassis School. ... Two cautions slowed the feature. ... At Sunday's event at I-80 Speedway, the track has pledged to have the Late Model feature on the track by 9 p.m. or everyone in the grandstands receives free admission to the track's next event.