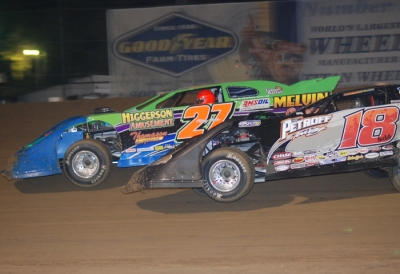 The night was also marked by scary turn-two rollover accidents for Scott James of Lawrenceburg, Ind., and Brian Shirley of Chatham, Ill.,, along with a variety of other cushion-jumping wrecks on a night when a hooked-up racing surface kept speeds high. No one was injured.

Seventh-starting Billy Moyer of Batesville, Ark., who has a series-leading five wins, settled for second at the quarter-mile oval while Terry Casey of New London, Wis., was third. Dennis Erb Jr. of Carpentersville, Ill., took fourth from Bill Frye of Greenbrier, Ark., in the final laps and pulled within four points of series-leading Randy Korte of Highland, Ill., who finished sixth.

It took several minutes to get the race rolling because of three straight turn-two accidents at the high-banked track without walls in the corners. Kevin Weaver slipped over the banking near the turn-two exit after contact with at least one other car on the first lap, then Brian Birkhofer backed his No. 15B over the banking between turns one and two on the second lap.

Shortly after the next restart, Shirley's car got too high and rolled passenger-side first over the banking, rolling at least one more time and landing upside down not far from the gate to enter the pits. He climbed out on his own and was OK.

After that, Melvin resumed leading a wild battle as Babb dogged Melvin while a groove-swapping Jeep Van Wormer of Pinconning Mich., worked on babb. Moyer joined the leaders by the 10th lap as they pulled away from the field.

The flurry ended on the 17th lap, however, when Van Wormer got into the frontstretch wall, knocking him out of the race. Among the heaviest raindrops of the night threatened the race, but as it went back to green just before the halfway point, the rain let up.

From then on, Moyer had the best seat in the house for a frenetic Melvin-Babb duel. Lap after lap, Melvin just stayed ahead of Babb, who could nearly pull alongside occasionally exiting turn two, and sometimes drove deeper into turn three to bid for the lead. Melvin ran a half-car width higher on the track as Babb repeatedly nosed underneath.

But as the laps wound down, it appeared Melvin was headed for his second series victory until he pulled up suddenly in turn one as Babb and then Moyer blew past. A lap-34 caution appeared, but Melvin was able to toggle his car's finicky MSD box and rejoin the rear of the field.

Moyer had nothing for Babb the final six laps as the two-time series champion raced to his second victory in a row after going winless the first 16 events. Babb won $6,000 the previous night at one of his home tracks, Macon (Ill.) Speedway.

The series was scheduled to run a $10,000-to-win event Saturday at I-55 Raceway in Pevely, Mo., but overnight and morning rains cancelled the event. No makeup date was immediately announced.

In a race marred by the scary flipping accident of leader Scott James, Frank Heckenast Jr. won to transfer to the main event along with Jason Feger. James was hammering the cushion through the early laps when his right rear slipped over in turn two and his No. 83 rolled two or three times, ending up on its wheels. James wasn't injured. Wes Steidinger and Mike Hammerle missed transferring but got provisional starting spots in the main event.

Rodney Melvin, who has won a series-best nine heat races, will start on the pole after the redraw among heat winners. Bill Frye starts alongside with Shannon Babb and Jeep Van Wormer filling the second-row spots. The B-Main is coming up with Frank Heckenast Jr. and Scott James on the front row.

Outside front-row starter Bill Frye won a tight race with polesitter Terry English over the first half-lap and went on to a victory. English held on to second despite pressure from series points leader Randy Korte as the top three stayed right toether most of the race. Further back in fourth was Brian Shirley, who kep Wes Steidinger at bay throughout the caution-free race.

Will Vaught became the first polesitter to win the race into turn one, but that didn't last long as outside front-row starter Shannon Babb overtook him exiting turn four on the first lap and led the rest of the way. Billy Moyer went from fourth to second on the third lap after a turn-one tangle between Vaught and Jason Feger, but he couldn't quite overtake Babb. Denny Woodworth finished a distant third over Vaught while Feger ended up fifth. Vaught survived a wild ride over the turn-one banking on the third lap after contact from Feger; officials penalized Feger, sending him to the tail just behind Vaught in a race where only six cars were running at the finish. The first caution appeared on the second lap when Derek Chandler slid over the turn-one banking and smackd the frontstretch wall, flattening his right rear tire and damaging his car.

Rodney Melvin got the jump on polesitter and fellow front-row starter Donny Walden as the high groove appears the place to be early on at Quincy. The top two finished a half-straightaway ahead of third-finishing Kevin Weaver, who fought off challenges from Terry Casey and Scott James. Casey got the fourth and tinal transfer spot. The race's first start was called back when Weaver and Ed Dixon both slipped over the turn-one banking, but they didn't make contact and were able to restart with no problems.

Jeep Van Wormer grabbed the early lead from outside the front row and blazed to victory on a fast track moistened by light rain just before the race. Van Wormer and polesitter Brian Birkhofer had a two-car breakaway but Birkhofer never made a serious bid for the lead, although things got a little dicey for Van Wormer on the last lap as he lapped Mike Hammerle and put a second lap on a very slow Russ Schoonover. Dennis Erb Jr. finished a comfortable third in a beatup car while Ryan Unzicker was fourth, far ahead of Frank Heckenast Jr. The first start was called back when Birkhofer washed up between turns one and two left Erb with nowhere to go; Erb got the worst of it as Unzicker also suffered a little damage.

Will Vaught of Crane, Mo., topped 33 qualifiers at Quincy Raceway for the 18th leg of the UMP DIRTcar Summernationals. His lap of 12.669 seconds on the 3/8-mile oval puts him on the pole of the third heat race.

The weather and radar has looked ominous throughout the late afternoon, but only the lightest of sprinkles fell until the IMCA stock car heats began, which rain picked up a bit; racing continued. ... Despite the weather, a healthy crowd is on hand filling perhaps 90 percent of the stands. ... Randy Korte leads the series points with 1,090 points over Dennis Erb Jr. (1,076) and Jason Feger (1,008). ... With Steve Sheppard Jr. and Brandon Sheppard skipping Quincy, the number of drivers who have competed in all 18 events is down to 10. ... Rejoining the series at Quincy if five-time race winner Billy Moyer of Batesville, Ark., Brian Birkhofer of Muscatine, Iowa, Bill Frye of Greenbrier, Ark., Terry Casey of New London, Wis., Will Vaught of Crane, Mo., and Scott James of Lawrenceburg, Ind. ... Quincy fans can use their tickets stubs from the Summernationals event to get $3 off from Sunday's Pepsi Mid-Season Championships. The track runs the IMCA Late Model division each Sunday. ... Among giveaways for the night are two backstage passes for the track's Aug. 7 Travis Tritt concert.