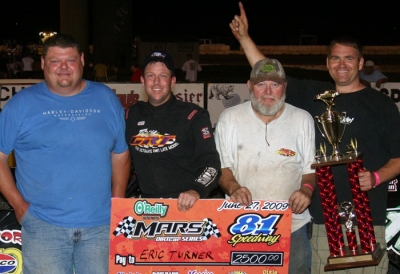 WICHITA, Kan. (June 27) — Eric Turner of Springfield, Mo., notched his second career Late Model victory with a $2,500 win at 81 Speedway in an event co-sanctioned by the O'Reilly National Championship Racing Association and O'Reilly MARS DIRTcar Series. Turner, who started on the pole the previous night in Meeker, Okla., and faded to finish sixth, made the most of Saturday's pole position and led all 30 laps. | Slideshow

"It felt good up on the top and I wasn't about to move," said Turner in victory lane. "This was a momentum deal and I knew with the experience with the people behind me that I better not screw it up."