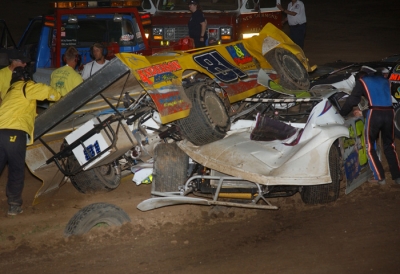 Simpson started on the pole and was on his way to snapping the two-race win streak of Mars, who won Thursday's WDRL event at Superior (Wis.) Speedway and Cedar Lake's weekend opener on Friday.

But after a lap-30 caution, Mars took control for a lead he'd never give up. Simpson, meanwhile, got into the backstretch wall and dropped back to fourth while Denny Eckrich of Tiffin, Iowa, and 19th-starting Adam Hensel of Barron, Wis., pursued Mars.

A major accident, however, slowed the action when Jason Utter, Ashley Anderson and Rick Hanestad tangled, with Anderson's machine resting atop Utter's battered No. 31 when the action stopped.

After the red clag, Mars led Eckrich and Simpson back to green and closed out his victory to total $15,000 in three nights of racing. Hensel was fourth and Bill Frye of Greenbrier, Ark., rounded out the top five.