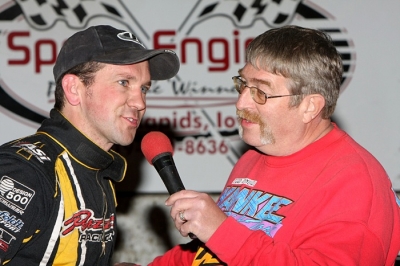 WEST LIBERTY, Iowa (May 2) — Brian Birkhofer of nearby Muscatine gave the hometown fans something to cheer about as he pocketed $10,000 for his victory in the 50-lap conclusion of the May Day Two-Track Classic West Liberty Raceway. | Slideshow

"I have a lot of fun here," Birkhofer said while surrounded by family, friends and fans in victory lane. "It’s just 25 miles down the road from home. I’ve turned a lot of laps here, and I have a lot of fans that come out and support me here.”

Iowa native and polesitter Billy Moyer of Batesville, Ark., dueled with Birkhofer early before settling for second while Shannon Babb of Moweaqua, Ill., finished third at the half-mile oval in southeastern Iowa. Jimmy Mars of Menomonie, Wis., and Matt Miller of Waterville, Ohio, rounded out the top five while Terry Phillips of Springfield, Mo., the previous night's May Day Two-Track Classic winner at Farley Speedway, was ninth.

Birkhofer finished second in his heat, and that coupled with his fast qualifying time in a field of 43 open-competition Super Late Models gave him a spot in the fast dash. Finishing the dash in second, behind Moyer, Birkhofer started the main event outside of Moyer in the first row.

After a caution spoiled the initial start, Moyer shot into the lead at the outset followed closely by Birkhofer. Over the next 10 laps, the pair would run some of the most intense laps of the night, diving into the corners side-by-side, and blasting down the straightaways in a battle for the lead. Moyer led the first two laps, Birkhofer led lap three, then Moyer took command again through the ninth lap. Birkhofer slipped back by on the 10th lap for a lead he'd never give up.

Only one more yellow flag flew during the event, coming with 29 laps complete. Birkhofer began rolling again on the restart, but it was Babb now tracking him from the second spot. Babb, who started fifth and ran third early, took second from Moyer on the restart and tried to chase down Birkhofer.

Babb weaved through traffic to gain a shot at the lead, but Moyer stayed right in the hunt and regained the second spot with eight laps remaining.

In the closing laps, Moyer gained some ground in traffic, but Birkhofer crossed the finish line with plenty of room to spare.

"When you’ve got a pretty good car out in front of you, you can’t let them get away,” the 37-year-old Birkhofer said of his early duel with Moyer. “Billy had a good line he was using and I had to make sure I could that line away from him.

"About halfway, it felt like a tire sealed up, so I wasn’t getting around quite like I wanted," he added. "I had my line and I had to not let (lapped cars) dictate where I was going to run."

Notes: Birkhofer drove an MB Custom Chassis with a Pro Power Engine and sponsorship from Daufeldt Transport, ASI Racewear and McDonald's. ... Birkhofer's previous victory at West Liberty, a track where he's dominated, came last October in the Liberty 100, a $7,000-to-win event. ... The main event was truly a family affair as the two Simpson brothers (Chad and Chris), the two Kile brothers (Kevin and Kurt) and the three Eckrich brothers (Dave, Denny and Andy) all made the field. ... The weekend action as sponsored by Banner Valley Hauler, a long-time sponsor for runner-up Billy Moyer. ... Jimmy Mars and Matt Miller recorded top-five finishes in each of the weekend's events at Farley and West Liberty. ... The Keith Simmons-promoted West Liberty, which runs NASCAR-sanctioned Late Models every Saturday, hosts another open-competition special on Aug. 4, paying $5,000 to the winner.