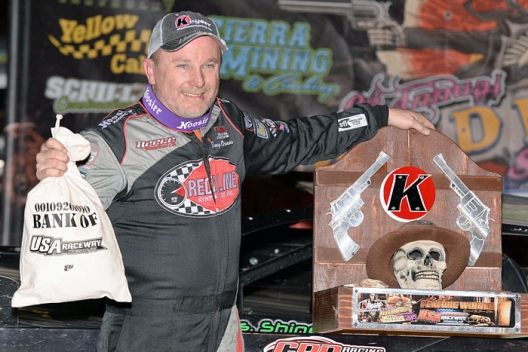 Tom Macht/photofinishphotos.com
Jimmy Owens holds the keepsakes he received after winning the $10,000 Wild West Shootout finale.
What won the race: Jimmy Owens of Newport, Tenn., stormed to the outside of the 3/8-mile oval on an early restart to take the lead from Chris Simpson of Oxford, Iowa, on lap 17 and never looked back en route to a $10,000 triumph. It was his second consecutive win in his new Rowland Racing ride to close the six-race miniseries.
Quotable: "This definitely boosts our confidence up for Brunswick and Florida," said Owens, referring to the start of the Lucas Oil Late Model Dirt Series season next month in Georgia and Florida. "Maybe we can get some wins down there this year."
On the move: Billy Moyer of Batesville, Ark., advanced from the 20th starting spot to finish seventh. He failed to win at least one Wild West Shootout feature for the first time since the event restarted in 2010 after a one-year hiatus.
Winner's sponsors: Owens's Rowland Racing Club 29 Race Car is powered by a Pro Power engine and carries title sponsorship from Widow Wax.
Points chase: Sixth-place finisher Rodney Sanders of Happy, Texas, captured the $2,000 Keyser Manufacturing Wild West Shootout championship by a mere two points (643-641) over Jason Papich of Nipomo, Calif., who placed fourth in the feature.
Car count: 50
Polesitter: Garrett Alberson
Heat race winners: Jimmy Mars, Rodney Sanders, Bumper Jones, Jason Krohn, Tyler Erb
Consolation race winners: Billy Moyer Jr., Chase Junghans
Editor's note: Results and race details are unofficial.
By Kevin Kovac
DirtonDirt.com senior writer

TUCSON, Ariz. — Many observers wondered what exactly Jimmy Owens was doing when he sat in second place and opted to use the outside lane for a Delaware double-file restart on lap 15 of Sunday night’s 50-lap Keyser Manufacturing Wild West Shootout finale at USA Raceway.

That group included … Owens himself.

“When I chose it, I was like, ‘You idiot. What did you chose the outside for?’ said Owens, a 42-year-old Dirt Late Model superstar from Newport, Tenn.

Alas, Owens’s restart groove selection proved to be a winning one. He sailed around the top of the 3/8-mile oval to grab the lead from Chris Simpson of Oxford, Iowa, on lap 17 and stayed there for virtually the entire remaining distance to register a $10,000 triumph.

The victory brought the six-race Wild West Shootout to a spectacular conclusion for Owens, who 24 hours earlier earned his first win since joining the Rowland Racing team for the 2015 season.

“I was beginning to wonder after the first (few races) of the week,” Owens said of his first career visit to Arizona for the Wild West Shootout. “It just took us a little while to get the car where we wanted it and it ended up being a good week. We got a couple wins and learned a lot here that will maybe help us out in the future.”

Owens controlled the late stages of the race, pulling away from the pack following a lap-39 caution flag to defeat Jimmy Mars of Menomonie, Wis., by nearly a straightaway margin. Mars, 42, passed Simpson for second on the final restart and stayed in the runner-up spot to the finish for his best performance of the ’15 Wild West Shootout.

Simpson, 31, settled for a third-place finish after starting fifth and leading laps 11-16. Jason Papich of Nipomo, Calif., logged his third top-five finish of the week with a fourth-place outing and Jan. 11 winner Tony Jackson Jr. of Lebanon, Mo., climbed forward from the 13th starting spot to finish fifth.

Owens fell short in the final Wild West Shootout standings, finishing third, five points behind Sanders. But he was more than satisfied with winning two straight features to close the mid-winter meet, the final one coming largely due to his decision to use the outside groove.

“We got to the lapped traffic and I could see the high groove wasn’t no faster than the low groove,” said Owens, who moved to second place behind Simpson when early pacesetter Garrett Alberson of Las Cruces, N.M., relinquished the lead to terminal mechanical trouble on lap 11. “The high side’s been the way around here every night this week, so I just figured I’d get up there and give it a whirl.

“I thought if I could just get up there … it felt like that bottom was slowing down so much, I figured I’d have to be able to momentum around the high side and keep my speed up a little better. It was kind of a gamble. I didn’t know if it would stick or not.

“I was just thinking, I don’t want to follow (Simpson) in the bottom and slow down and give someone the opportunity to roll the outside,” he added. “To me, I knew we had a pretty good car, and I knew I’d be able to run the high side and keep it under me pretty good — so for the most part, I figured I might as well try it.”

Owens was able to guide his Club 29 Race Car around the outside of Simpson’s own Club 29 machine to assume command on lap 17 and never looked back.

“It just was real treacherous up there — you had to stay on your toes,” Owens said of the outside line. “I felt I maybe could’ve moved to the bottom a little bit and been a little better and maybe held ‘em off, but I didn’t know where everybody was running. I got the lead up top so I figured we’d just stay there.”

Simpson stayed within striking distance of Owens through the race’s middle stages but ultimately couldn’t keep pace with the eventual winner. He eventually lost second to Mars on the lap-39 restart because he stayed on the inside of the track.

“We were pretty much set up to run the bottom,” said Simpson, whose best previous finish of the week was sixth on Jan. 11. “I knew (Owens) wouldn’t follow me, but it’s hard to leave a place where you passed somebody like I did to Jimmy. I knew the bottom was going away, but I figured I’d just hold my own and then if Jimmy would get by me maybe I could work back under him.

“Actually, at one point I was kind of running (Owens) back down and I felt like we had a good enough car to run up on him … and, you know, one little mess up the way he was running up there and I could get back by him. But then that second caution came out. I probably should’ve picked the top side (for the restart), but I didn’t really know where Mars was running. I thought maybe he’d be on the bottom, but I probably should’ve picked the top, ran a couple laps and then got back to try and work on (Owens) again.

Mars, meanwhile, was very satisfied with a runner-up finish behind the wheel of his MB Customs mount.

“We probably were a little too aggressive with our right-rear tire and chunked it up a little bit, but it was good,” said Mars, who started fourth. “We fell off there just a little bit from where we wanted to be, but we’re happy with second the way the week’s gone.

“I was hoping that Owens was gonna take the bottom there (on the final restart) because we were actually feeling pretty good up on the top, but if there wouldn’t have been a late-race caution there we would’ve run third so I’m happy with the way everything turned out.”

Notes: Owens's victory gave Club 29 Race Cars a sweep of the week's six winner's trophies. ... The two caution flags that flew during the 50-lapper — on lap 15 for Tyler Erb of Magnolia, Texas, slowing with a smoking car and lap 39 after Jason Krohn of Slayton, Minn., slapped the turn-three wall — ended the Shootout’s string of four consecutive non-stop features. … Krohn’s race-ending incident came as he was bidding to pass Papich for fourth place. The two cars made contact, forcing Krohn against the outside wall. He reported afterward that he injured his right thumb in the tangle, but he said it was just sore and did not appear to be broken. … Billy Moyer of Batesville, Ark., made a strong advance from the 20th starting spot to finish seventh, but he went winless for an entire Wild West Shootout at USA Raceway for the first time since the miniseries restarted in 2010 after a one-year hiatus. … There were some fireworks in the second heat between Sanders and Ryan Gustin of Marshalltown, Iowa, who faced off in a battle for the victory. Gustin slipped high in turn two on the final lap, allowing Sanders to charge underneath; then in turn three Sanders slid across the track and Gustin bounced over the cushion, slapping his right-rear corner into the wall but holding on to finish second. On the cool-down lap Gustin rubbed up alongside Sanders to express his displeasure. ... Later in the program, Gustin outdueled Sanders to win the 25-lap open-wheel modified feature. Gustin’s first modified triumph of the week came despite the fact his car's engine malfunctioned on the final lap. ... Darrell Lanigan, who won two of the week’s first four features and entered Sunday’s action leading the points standings, suffered a broken right thumb in Saturday night’s 30-lapper and did not compete in the finale.

Fifty cars are signed in for the finale of the Keyser Manufacturing Wild West Shootout. A 50-lap feature paying $10,000 tops the program. … The week’s last four features have run caution-free. There hasn’t been a yellow flag needed in a feature since lap 25 of the 30-lap headliner on Jan. 10. … Shootout points leader Darrell Lanigan of Union, Ky., will not bid for the $2,000 championship after pulling out of tonight’s action due to a broken right thumb he suffered in a lap-two scrape during Saturday night’s feature. He decided to skip tonight’s event after doctors who treated his injury — X-rays revealed his thumb bone was split down the middle and broke in two places — felt that he could risk further damage by racing without a cast applied to protect his thumb. Lanigan is spending the evening at his hotel and will fly home in the morning; he’ll visit a specialist for further evaluation of his injury, which he said earlier this afternoon remains “very painful.” … Jon Mitchell of Texarkana, Texas, who broke his right thumb in a B-Main incident on Wednesday night, will attempt to compete for the second consecutive night with his thumb heavily wrapped and splinted. He failed to qualify last night but hopes a better heat-race starting spot will give him a shot tonight. “This place is so fast and you have to make something happen,” said Mitchell, “but the problem with having a broken thumb is that you can’t take too many chances. Maybe tonight we’ll get in position to make (the feature) without having to do that.” … Kyle Beard of Trumann, Ark., barely made it onto the track to start Saturday night’s feature after a battery cable wire broke on his car as he sat in the staging area, leaving him unable to fire up his machine. His crew was able to make a quick fix by cutting the wire from the gauges and MSD box and hot-wiring it with another wire, allowing Beard to start the engine with the help of a push truck.