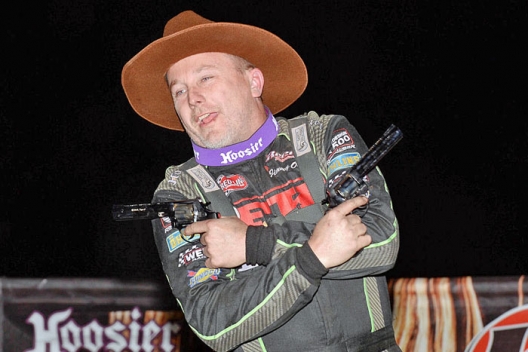 Tom Macht/photofinishphotos.com
Jimmy Owens enjoys victory lane after winning Saturday night's Wild West Shootout feature.
What won the race: After overtaking Jason Papich of Nipomo, Calif., for the lead on lap 12, Jimmy Owens of Newport, Tenn., turned back a furious late-race bid from his Rowland Racing teammate Stormy Scott of Las Cruces, N.M., to capture the 30-lap Wild West Shootout feature. The $3,000 score was Owens's first-ever in the state of Arizona and first since joining the Rowland Racing operation for the 2015 season.
Quotable: "It’s been a long road, but we finally got here," Owens said of his first win with Rowland Racing. "It’s been a long winter trying to get things sorted out, but hopefully everything will be for the better and everybody can race good from now on."
Key notes: The Wild West Shootout concludes on Sunday with a 50-lap feature paying $10,000 to win. DirtonDirt.com's live pay-per-view video coverage starts at approximately 4 p.m. Mountain time (that's two hours behind Eastern, one hour behind Central).
On the move: Chris Simpson of Oxford, Iowa, advanced from the 17th starting spot to finish seventh.
Winner's sponsors: Owens's Rowland Racing Club 29 Race Car is powered by a Pro Power engine and carries title sponsorship from Widow Wax.
Points chase: Darrell Lanigan of Union, Ky., entered the event with a 37-point lead over Rodney Sanders of Happy, Texas, but was an early retiree.
Car count: 52
Polesitter: Jimmy Owens
Heat race winners: Anthony Burroughs, Jimmy Owens, Ricky Weiss, Jason Papich, Stormy Scott
Consolation race winners: Chris Simpson, Terry Phillips
Editor's note: Results and race details are unofficial.
By Kevin Kovac
DirtonDirt.com senior writer

As he awaited his fifth feature start with the Rowland Racing team he joined for the 2015 season, the superstar driver from Newport, Tenn., was struck by the possibility that he might experience his victory-lane breakthrough and do it with his teammate, Stormy Scott of Las Cruces, N.M., right behind.

“I was sitting in the lineup and I was thinking, ‘Well, it would be nice if we got a one-two (finish) tonight — as long as I’m the winner,’” Owens said with a smile. “I guess I’ll take a one-two if it’s behind Stormy too because that’s good for the team, but I like being the winner.”

Owens, 42, saw his vision become reality after he grabbed the lead from Jason Papich of Nipomo, Calif., on lap 12 and survived a furious late-race challenge from Scott, giving him a $3,000 triumph that was his first for his new team owner Bryan Rowland of Woodward, Okla., and his first-ever in the state of Arizona.

The 25-year-old Scott saw his last-lap bid to overtake Owens snuffed out because he hopped the turn-one cushion, but he held on to finish second, 0.599 of a second behind Owens in a race that ran caution-free from start-to-finish. An open-wheel modified standout with less than 20 career Dirt Late Model starts on his resume, Scott secured a memorable top-two sweep for Rowland Racing.

“It’s an awesome way to get our first win with a new team,” said Owens, who announced his move to Rowland Racing in early December following the termination of his ultra-successful eight-year run driving for Mike Reece of New Tazewell, Tenn.

Jimmy Mars of Menomonie, Wis., who one year ago won the final Saturday-night event of the Wild West Shootout, finished a distant third, nearly five seconds behind the victor. Papich slipped to fourth at the checkered flag after starting second and leading laps 1-11 — he said he made a mistake by getting conservative and staying off the fast outside line — and A.J. Diemel of Elm Mound, Wis., started and finished fifth for his best performance of the ’15 Shootout.

Owens had been up-and-down in his first four starts of the Shootout, finishing as high as fourth (from deep in the field on Jan. 11) and as poorly as 23rd (Friday night). A long-awaited smooth, strong night — he won a heat race and started from the pole position in the feature — put a smile on his face.

“As bad as we struggled yesterday, it feels real good to get this win,” said Owens, who hammed it up in victory lane by striking a pose with the six-shooter guns he was handed by officials and wearing a pair of horseshoe-shaped glasses. “We were close some of the other nights, but we just had a couple of bad draws and things just not go our way. It’s a relief to bring it all together tonight.”

Owens’s march to victory wasn’t without some anxious moments, however. Scott, who started eighth and marched forward to reach second place with a lap-19 pass of Mars, made sure of that.

Once Scott figured out that he was indeed in the runner-up spot, he tossed his Club 29 machine around the outside of the 3/8-mile oval with wild abandon to run down Owens.

“I didn’t realize I was that far up there,” Scott said. “I could see Jimmy, but there were a couple guys ahead of me that I didn’t remember going by so I thought I might be in fourth. Then I looked up at the scoreboard and saw I was second and realized I was reeling (Owens) in pretty quick.”

“Before I got to him, I gathered my thoughts and I was saying, ‘You know, just don’t mess up. Just keep doing what you’re doing.’ But once I got up to him we got into heavy lapped cars and it was just, Go as hard as you could.”

Scott dived underneath Owens rounding turns three and four on lap 24 but had to back off because a lapped car loomed ahead. He momentarily nosed outside of Owens in turn two one circuit later and was virtually right behind Owens as the white flag waved, but a bobble in turn one on the final lap ultimately doomed him.

“I started bending the car too much out of two and I also started overdriving it,” Scott detailed. “(On the last lap) I didn’t get the car quite bent enough when we went into one and my right front hit that mud stuff and just washed out, and that was it. I got into the wall a little and tore up the body, so I guess we were lucky to hang on to second.

“It was a really good run for us though,” he added. “I felt bad that I tore it up, but I guess at least we were in the front when we did it.”

Owens thought Scott might be coming on the outside of the track from the signals he received from his crewmen in the infield, but he never clearly saw Scott above him so he didn’t jump to the fast but very unruly cushion.

“I didn’t think I had to stay up there but I knew I could get up there and run fast if I needed to,” Owens said. “I tried to not get up there because I didn’t want it to look like that.”

Owens pointed toward Scott’s car, which sat next to his in the pit area with its right side thoroughly beaten up.

Nevertheless, Owens was extremely impressed by his racy young teammate.

“Stormy’s a heck of a driver,” Owens said. “He’s got a lot of talent. He drove one of Scott’s cars (a Scott Bloomquist chassis) down in Florida a couple years ago and showed a lot of potential, and then to get in one of these cars this week and run like he did tonight, it shows a lot.”

Scott, who entered the Wild West Shootout having not driven a Dirt Late Model since Florida Speedweeks in 2013, was thrilled just to be able to threaten Owens.

“I really wasn’t sure what I would’ve done (with Owens) if the lapped cars weren’t all over the place,” Scott said. “The only place I had a chance (to pull off a pass) was if I come off two real smooth on the top because I could see Jimmy was going in there and diamonding it, but man, he doesn’t make mistakes, so I don’t think there was no way I would’ve got him.

“I was excited to run second, to be honest with you. I would say that if I would’ve passed him, that would’ve probably been one of my most memorable races ever.”

Notes: Rowland Racing’s owner Bryan Rowland wasn’t on hand to witness his team’s one-two finish. Scott said he is in North Carolina taking lessons for a pilot’s license he is pursuing. … The feature was the fourth consecutive to run caution-free. … Darrell Lanigan of Union, Ky., who entered the evening coming off a Friday-night victory and leading the Wild West Shootout points standings, struggled in his heat due to a right-rear bodywork damage sustained in a slap of the wall and was eliminated from the feature on lap two after getting squeezed between Terry Phillips of Sprinfield, Mo., and Anthony Burroughs of Muscle Shoals, Ala., on the backstretch. The contact was jarring enough for Lanigan to suffer a broken right thumb, putting his participation in Sunday night’s $10,000-to-win finale in doubt. … Among the non-qualifiers was Ryan Gustin of Marshalltown, Iowa, who scratched from further action after hitting the turn four wall during his heat race.

Fifty-two cars are signed in to compete for the second consecutive night. … Saturday’s $3,000-to-win 30-lapper sets the stage for Sunday evening’s big Wild West Shootout finale, which boasts a $10,000 top prize. … Weather conditions are absolutely picture-perfect for the second consecutive night. Temperatures have risen to the mid-70s under brilliantly sunny skies this afternoon. … Jon Mitchell of Texarkana, Texas, who suffered a broken right thumb in a B-Main tangle on Wednesday night and appeared to be done for the week, plans to take a shot at racing tonight. He has doctored his steering wheel with some plastic and wire-ties so that its center is solid — no spokes to get his hand stuck in — and will go for hot laps to see if he feels confident enough to race with his splinted thumb. … Arizona’s Joey Moriarty scratched from Dirt Late Model action on Friday night to concentrate on his open-wheel modified, but he will be back pulling double-duty tonight. … The last three Dirt Late Model features have run caution-free from start-to-finish. The last caution flag to fly in a feature this week was on lap 25 of the opening-night event — 95 laps ago. … Billy Moyer of Batesville, Ark., has won at least one feature during the Wild West Shootout at USA Raceway since the mid-winter racing meet restarted in 2009 after a one-year hiatus. He’s winless so far this year, however; runner-up finishes on Jan. 10 and last night are his best runs.