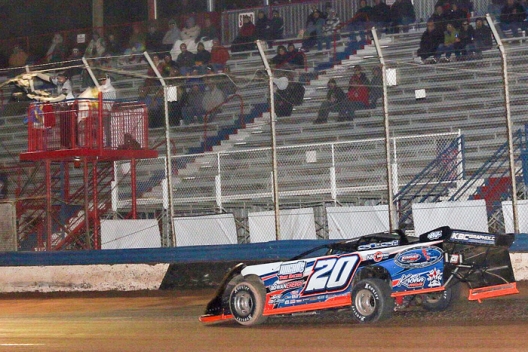 Steve Schnars/www.schnarzy.com
Rodney Sanders takes the checkered flag.
What won the race: Rodney Sanders of Happy, Texas, hustled from fifth to second in three laps, ran down race-long pacesetter Don Shaw of Ham Lake, Minn., to assume command on lap 14 and stayed in front to the finish. The 25-year-old beat Darrell Lanigan of Union, Ky., to the finish line by just over 1 second to earn $3,000 for his first-ever Shootout triumph.
Quotable: “It’s just got a good balance more of the time,” Sanders said of his Club 29 Race Car. “We didn’t change much on it tonight. They’re good cars, just real simple for us, which is good because we’re new to these Late Models.”
Key notes: The Wild West Shootout is off Thursday before closing out over the weekend with three consecutive nights of competition. Friday's program features pay-per-view live video coverage on DirtonDirt.com starting at approximately 6 p.m. Mountain time (that's two hours behind Eastern, one hour behind Central).
On the move: Jimmy Owens of Newport, Tenn., was on the charge for the second consecutive race, moving from the 18th starting spot to seventh at the finish.
Winner's sponsors: Sanders's Club 29 Race Car is powered by a Clements engines and carries sponsorship from Wichita Tank, Swan Energy, Kimrad Transport, Integra Shocks, Outreachers Sustainable Solutions, Alaron Energy and STS.
Points chase: Darrell Lanigan of Union, Ky., padded his lead in the battle for the $2,000 championship prize.
Car count: 46
Polesitter: Tony Toste
Heat race winners: Darrell Lanigan, R.C. Whitwell, Don Shaw, Jason Papich, Tony Toste
Consolation race winners: Jake O'Neil, Jimmy Owens
Editor's note: Results and race details are unofficial.
By Kevin Kovac
DirtonDirt.com senior writer

“I looked up at the (score) board and I saw the ‘5’ up there in second (place) and I knew that had to be Darrell (Lanigan),” Sanders said, “so I was just running scared.”

That proved to be a more than adequate boost for Sanders, a fast-rising 25-year-old from Happy, Texas, who survived a late-race challenge from Union, Ky.’s Lanigan to register a $3,000 victory in Round 3 of the six-race midwinter racing meet at the 3/8-mile oval.

An open-wheel modified standout who has fewer than two-dozen Dirt Late Model starts on his career resume, Sanders steered his Lanigan-designed Club 29 Race Car past race-long pacesetter Don Shaw of Ham Lake, Minn., for the lead on lap 14 and never looked back in the caution-free race. He beat the 44-year-old Lanigan to the finish line by 1.001 seconds to become the second first-time Wild West Shootout winner of 2015, joining Sunday-night victor Tony Jackson Jr. of Lebanon, Mo.

Jason Papich, 36, of Nipomo, Calif., advanced from the sixth starting spot to finish a Wild West Shootout career-best third, just under two seconds behind Lanigan at the checkered flag. The 51-year-old Shaw settled for a fourth-place finish after starting second and leading laps 1-13 while Papich’s teammate, Tony Toste, 46, of Pismo Beach, Calif., slipped from his pole position start to fifth in the final rundown.

Making his Dirt Late Model debut at the Wild West Shootout, Sanders announced his status as a contender with a fifth-place finish in the Jan. 10 opener. After a busted radiator knocked him out of the following night’s feature, he was on a mission in the event’s only midweek program.

Sanders charged from the fifth starting spot to second place in just three laps and proceeded to stalk Shaw, who jumped to an early lead for the second consecutive race. The youngster made his move just before the race’s halfway mark, seizing control on lap 14 and immediately opening up a healthy advantage.

“There was a little bit of a cushion and I knew I probably had to be up there so I was trying to get by him and get up there as fast as I could,” said Sanders, detailing his pursuit of Shaw. “I was just trying not to make any mistakes after that.”

Lanigan, who started fourth but slipped back to fifth when he bounced over the turn-four cushion on lap two, rallied to reach second place with a lap-19 pass of Shaw. The reigning World of Outlaws Late Model Series champion quickly cut into Sanders’s half-straightaway edge and on lap 25 drew within a couple car lengths of the leader, but moments later Lanigan slid high in turn four and lost significant ground, effectively ending his hopes of a second Wild West Shootout victory in three starts with the Louisiana-based Childress Racing Club 29 car.

“I don’t want to make excuses, but the right-rear (tire) had a big hole in it,” said Lanigan, whose win and runner-up finish sandwiched a third-place run in Sunday night’s feature. “The last 10 laps I just got tight because the tire was going down. We just couldn’t turn in the middle of the corner.

The talented Sanders is hopeful that his high-profile victory — just the second Dirt Late Model win of his fledgling career, actually, after an April 2014 score at I-80 Speedway in Greenwood, Neb. — will serve as a harbinger of full-fender success to come.

“This is awesome,” said Sanders, whose Dirt Late Model equipment is fielded by David Tanner of Wichita Tank in Wichita Falls, Texas. “We haven’t run a Late Model a whole lot (a handful of times in 2013 and about a dozen starts in ’14), but we’re wanting to run a whole lot more. This definitely helps for sure.

“I knew we could potentially run good here if everything went right, but I didn’t know if we could actually pull it off,” he added. “We had a good car in the heat race and I didn’t jack with it too much, and then I knew when we took off (in the feature) it was good. I just gave it everything I had and it all worked out.”

Notes: Sanders’s triumph made Club 29-Black Diamond Race Cars 3-for-3 in the Wild West Shootout. The chassis firm headed by Lanigan and Ronnie Stuckey also claimed a sweep of the top-three finishing positions with Sanders, Lanigan and Papich. … Shaw and Toste completed the top five running Rocket Chassis machines. … The feature was the second consecutive to run nonstop. ... R.C. Whitwell of Sahuarita, Ariz., recorded a runaway heat win and started third in the feature, but the only Arizona driver to win a Wild West Shootout feature only managed an eighth-place finish. … World of Outlaws Sprint Car Series champion Donny Schatz of Fargo, N.D., made his 2015 Wild West Shootout debut after returning from a racing trip to Australia. He started 22nd in the feature and quietly worked his way forward to finish on the lead lap in 13th place. … Billy Moyer of Batesville, Ark., was scheduled to start second in the fourth heat race but scratched from the event after breaking a motor during hot laps. His crew spent the remainder of the night swapping engines. ... Clay Daly of Watsonville, Calif., also scratched from further action after his heat due to terminal mechanical trouble. ... Reports indicate that Jon Mitchell of Texarkana, Texas, suffered a thumb injury in a homestretch tangle during the second consy. ... Other notable non-qualifiers included Sunday’s winner Tony Jackson Jr., Garrett Alberson of Las Cruces, N.M., Chris Simpson of Oxford, Iowa, Terry Phillips of Springfield, Mo., and Ronny Lee Hollingsworth of Northport, Ala.

A 46-car field is signed in for Round 3 of the Wild West Shootout — the only mid-week show of the six-race meet. … A rogue rain shower hit the speedway around 3 p.m. MT, but hot laps started on schedule at 6 p.m. MT and the weather looks good for the remainder of the night, though temperatures are cool. … The high-profile newcomer to the Late Model field tonight is World of Outlaws Sprint Car Series champion Donny Schatz of Fargo, N.D., who flew to Arizona immediately after going undefeated in four sprint car starts in Australia. Schatz, who is driving his own Rocket No. 15 machine, scored a top finish of seventh in three Wild West Shootout starts last year. … Another addition to the Late Model action is Ken Murphy of Hooks, Texas, who is behind the wheel of a car from fellow Texan Jon Mitchell’s stable.