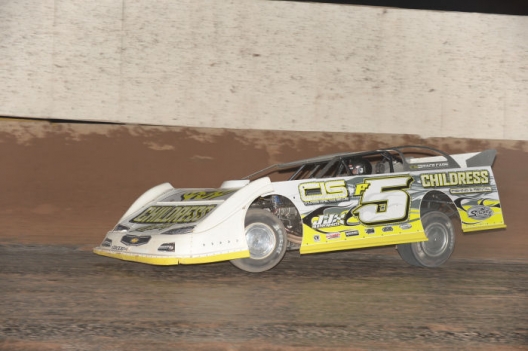 Once again flashing the never-say-die style that propelled him to a record-breaking 2014 season on the World of Outlaws Late Model Series, Lanigan steered Raymond Childress’s Louisiana-based car to victory Saturday in the 30-lap Dirt Late Model feature that kicked off the Keyser Manufacturing Wild West Shootout at USA Raceway.

Lanigan, 44, of Union, Ky., grabbed the lead from a faltering Billy Moyer Jr. of Batesville, Ark., on lap 21 and survived a caution flag with five circuits remaining to earn a $3,000 winner’s prize in his first-ever start at the 3/8-mile oval.

“This was one of those where you had to get up on the wheel,” said Lanigan, who started from the pole position and led the race’s opening lap before ceding the top spot to the second-starting Moyer. “It just depends on how bad you want to win, and we was wanting to win this one awful bad so you gotta do what you gotta do.”

That meant being unafraid to test the fast speedway’s unruly cushion when necessary. Lanigan danced with that devil to keep the field at bay following the final caution flag on lap 25.

“I tried not to bang it that hard,” Lanigan said of the ample lip of clay that built up around the top of the track. “I hit it a couple times and got the whole car off the ground, but I tried to avoid it the best I could.”

Lanigan’s closest pursuer after the final restart, Ryan Gustin of Marshalltown, Iowa, wasn’t so fortunate. He often tossed his Gressel Racing Rocket machine through the cushion to march from the sixth starting spot to second in 21 laps and stepped up his assault following the lap-25 caution period, but a flat right-rear tire with just a lap-and-a-half to go dropped the 23-year-old out of the top 10.

Billy Moyer of Batesville, Ark. — the 57-year-old father of the driver whom Lanigan overtook for the lead — inherited second place with Gustin’s misfortune and stayed there to the finish. But Moyer, who started 11th in his Longhorn Race Car, was nearly a straightaway behind Lanigan at the checkered flag.

Chase Junghans, 22, of Manhattan, Kan., grabbed a podium spot in the final laps, slipping past the younger Moyer to match his career-best finish of third in Wild West Shootout competition at USA Raceway. Moyer Jr., who led laps 2-20, settled for a fourth-place finish after being hampered for the race’s final third by a nosepiece damaged by a bout with the cushion. Rodney Sanders of Happy, Texas, completed the top five, falling just short of passing Moyer Jr. on the final lap.

Driving a brightly-colored Black Diamond-Club 29 car from Childress’s stable that was largely identical to his own self-designed Club 29 machines — save the powerplant, an Andy Durham engine as opposed to Lanigan’s usual Cornett motors — Lanigan was in perfect position to take advantage of Moyer Jr.’s woes.

“I knew we had a good car so I was just biding my time a little bit there (behind Moyer Jr.) and getting a little heat in my tires so I could move around,” said Lanigan, whose only previous appearance with Childress Racing came last October at Whynot Motorsports Park in Meridian, Miss. “Once we got some heat in the tires I got me a groove going there and (Moyer Jr.) screwed up there once and I got by him.”

A winner of a record 17 WoO races en route to capturing the national tour’s 2014 championship, Lanigan was pleased to get his new campaign off to a triumphant start thanks to the largesse of Raymond Childress.

“I definitely appreciate him bringing his equipment out here,” Lanigan said. “It’s a long ways to come, but it’s definitely fun coming out here. The weather’s great and the people are great, so I’m glad we came out here this year.”

The elder Moyer never got a chance to test himself against Lanigan after breaking into second place with the white flag flying. He thought he might have had something for Lanigan, however.

“I feel like we did for where we started at,” said Moyer, the alltime winningest driver in Arizona’s Wild West Shootout action. “I think counting the whole night from where the heat race (starting position) was with this draw crap (he started in the last row under a format that eschewed time trials and used passing points to transfer drivers from heats), we passed more cars than anybody. I’m happy with that.

“We’re out here just playing, tinkering with this car, and we’re happy with that. We still got five days left, so I think everything looks good for later in the week. The car felt real good.”

Junghans, who is about to start his second season as a full-time WoO traveler, was also upbeat about his performance.

“I was just holding on for dear life out there,” said Junghans, who started sixth. “I got up there (on the cushion) a couple times, but it was a handful. I just tried to hang back and see what those guys ahead of us were doing.

“Everything sort of fell our way at the end. Gustin had that flat, and luckily I had enough to get little Moyer.

“It definitely helps to start off in the right direction,” he added. “Hopefully we can keep on building off of it and have a good week and then take it on to (Georgia-Florida) Speedweeks. Maybe we can even get a win this week.”

“It’s not what we wanted,” said Moyer Jr., who celebrated his 27th birthday Jan. 5. “But look at our nose here (motioning to the car’s damaged right-front corner).

“I got beat, that’s all there is to it … but the nose didn’t help. We’ll take a second (but) we’re definitely aggravated that our nose is tore up. Our car’s gonna have to be gone through pretty good because of a bad mistake on the track prep (that he thought created the thick cushion he impacted).”

Notes: Lanigan’s night was made even more satisfying by the fact that all five heat winners — Sanders, Anthony Burroughs of Muscle Shoals, Ala., Tony Jackson Jr. of Lebanon, Mo., Stormy Scott of Las Cruces, N.M., and Jason Papich of Nipomo, Calif. — drove Black Diamond-Club 29 cars that he designed with Ronnie Stuckey. “That was pretty awesome,” he said. “I didn’t realize that, but it definitely showed what kind of product we’ve got. We’ve got all our support out here — me and Ronnie — to help these guys out and I think it pays off.” … Two caution flags slowed the feature: on lap 10 when Kyle Beard of Trumann, Ark., stopped in turn four and lap 25 when Ricky Weiss of Headingly, Manitoba, lost a wheel on the homestretch. … Papich ran in the top five throughout the race’s first half but slipped to ninth at the finish. … Jake Gallardo of Las Cruces, N.M., won the evening’s companion open-wheel modified feature.

Saturday night’s Wild West Shootout opener includes heat races, consolations and a 30-lap feature paying $3,000 to win. Starting spots for the heats were set by a draw and passing points will be used to determine the transfers. … Fifty Dirt Late Models are signed in for the action. … Among the drivers joining the field tonight after not practicing on Friday are Lonnie Parker Jr. of Glendale, Ariz., and Bumper Jones of Mesilla Park, N.M. … Matt Furman of Columbus, Ohio, swapped engines for tonight’s competition after the experimental powerplant he tried in practice was hampered by problems. … A.J. Diemel of Elk Mound, Wis., also made an engine swap following Friday’s practice. … Shane Edginton of East St. Paul, Manitoba, saw his week come to an early end due to terminal trouble with his team’s lone open-competition engine during Friday’s practice. “I guess I’ll just help somebody out the rest of the week,” said the 26-year-old Edginton, who is a close friend of Headingly, Manitoba’s Ricky Weiss. … After Friday night’s practice session prompted many drivers to wonder if track promoter Kevin Montgomery’s removal of the inside marker tires in favor of a dirt berm had made the racing surface more narrow, Montgomery and his track crew cut three feet off the berm and leveled it off for Saturday’s action. ... Dirt Late Model Hall of Famer Freddy Smith was interviewed on the homestretch after hot laps. Invited to Tucson to serve as the Wild West Shootout Grand Marshal, he was presented a specially-made jacket by track officials.