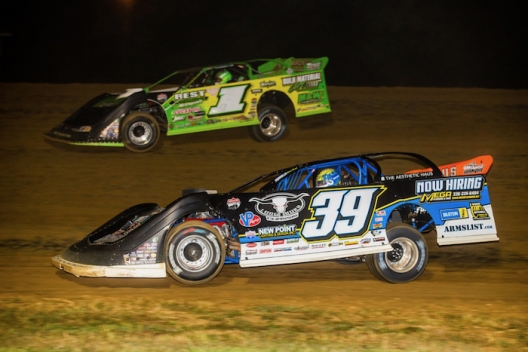 On Saturday at Brownstown Speedway, the Watertown, N.Y., veteran practically made up for the deficit, leading 64 of 100 laps from the pole for a third career Jackson 100 victory.

Now in topping Ricky Thornton Jr. by 1.457 seconds McCreadie’s lead that had been 105 points over Brandon Sheppard with eight races left is 180 points as the final three weeks of the season loom.

“It’s down to the nitty-gritty,” McCreadie said. “I’ve been in this situation before when you leave a little shot to get beat at the end of the year. We got beat (at Knoxville), so we’re trying to do the best we can and hope everything falls where it may.”

It was no ordinary win from the front row for McCreadie, who needed to outwork mid-race leader Tyler Erb — the leader of laps 26 through 64 — in testy lapped traffic to regain control and lead the final 36 laps.

For the first 25 laps, McCreadie looked poised to lead the duration of the event, executing restarts on laps four and 10 smoothly while racing into clean air around the top groove. In a role reversal, Erb — a driver who normally prefers the top, whereas McCreadie prefers the bottom — squeezed past McCreadie via the bottom groove as the leaders approached traffic on lap 26.

“Unfortunately just took so long to get the outside cleaned up to keep up,” McCreadie said. "I mean, Terbo passed me down there and I thought I probably need to get back to the money lane (on the bottom), and I was able to get back by him.”

As the laps clicked away, Erb widened his entry around the top while McCreadie reverted to his trademark bottom-feeding habits. By lap 62, McCreadie erased the deficit by pulling to the inside of Erb amid traffic. McCreadie’s winning move came two laps later on a two-for-one maneuver that nudged the New Yorker past Erb and a lapped car sandwiched between the leaders.

“Just got by lapped cars and kind of broke my momentum there,” Erb said. “I passed him running lower than he was, then I caught the lapped cars and couldn’t pass them on the bottom, so I moved up to the top. I got a couple (cars), and then we literally split the 20 car at the same time and got ahead of me there. Literally at the same time I was going to turn down but Ricky (Thornton Jr.) was there to fill the hole.”

Though Erb couldn’t make anything happen on the race’s final restart with 20 laps to go, he gladly took his second podium in four races.

“It was a good race. Drove in on the restart and maybe thought I had something for them in the middle-top there,” Erb said. “You could be there for about three to four laps and I feel like to get your tires hot. All in all, it was a great weekend. We really needed some good runs.”

As for Thornton, he couldn’t run the bottom quite as well as McCreadie, which made it difficult to keep pace in the closing laps.

“He was better in different spots than I was,” Thornton said. “I think that was probably the main thing. We were both kind of riding there I felt like, and I kind of showed him my nose one time and he took off. Congrats to T-Mac. That’s pretty cool. As I said, they had heartbreak there at Knoxville so it was nice for them to bounce back. (We had) an awesome car.”

McCreadie’s victory is his second win in the Jackson 100 in three years, adding to his 2020 triumph, as well as his victory in ’08. It was also McCreadie's 33rd career series win, which now ties him with Josh Richards for sixth all-time as he continues to close in on a second career Lucas Oil Series title.

“The best part about these three guys behind me is Knoxville was tough … that’s your lowest of lows,” McCreadie said. “For those guys to really be upbeat about everything, maybe they knew something I didn’t about this car. It’s turning the corner.”