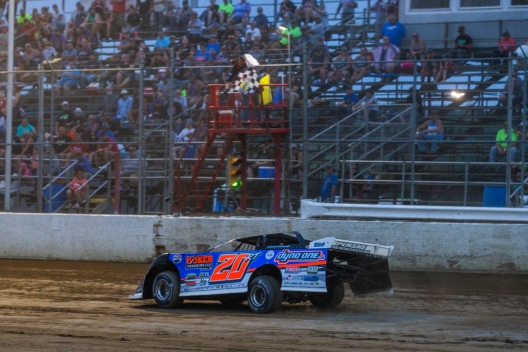 Fifth-starting Ricky Thornton Jr. grabbed the lead from Hudson O’Neal on lap 10 and went on to beat the Indiana driver by 2.294 seconds in the first 20-lapper. ... Thornton’s victory put him on the pole position for Sunday’s 60-lap, $30,000-to-win finale, but he’s not sure what to expect in the longer race. “I don’t know how good we’ll be when we have to move off the bottom,” he said. “The track just kind of came to us the longer we ran.” … Thornton was the third different leader in the first semi-feature, following Tim McCreadie (lap one) and O’Neal (laps 2-9). … Lucas Oil Series points leader Brandon Sheppard ran away with the second semifeature, leading the entire distance and beating Spencer Hughes by 5.200 seconds. “Our car was really good,” Sheppard said of his Rocket Chassis house car. “I can’t ask for much more than that.” … Hughes’s runner-up finish was an excellent rebound for the Mississippi youngster who was involved in a hard wreck during Friday’s Lucas Oil event at Portsmouth (Ohio) Raceway Park that significantly bent his car’s front end. … Fifth-starting Brandon Overton, making his first-ever start at Muskingum County, nearly reached second place midway through the second race before falling back to a fifth-place finish. … Mason Zeigler, driving the Barry Wright Race Cars house car, spun out of sixth place on lap three of the second semifeature to bring out a caution flag. He finished 10th and will have to run Sunday’s B-main. … Tyler Erb led all but the first lap of Saturday’s nightcap, but he had to survive a furious last-turn challenge from Devin Moran — the driver who led the opening circuit — to beat the hometown favorite by 0.619 of a second. “If I had got wide (rounding the final turn) he may have crossed me at the checkered,” Erb said of Moran. … Garrett Alberson contended for victory in the late stages of the third race before settling for third. … The original start of the third semifeature was aborted by a red-flag incident that swept up five of the 12 starters in turn four. A jam-up that began when polesitter Moran’s left-front wheel locked up saw Dustin Smith barrel-rolled once over the rearend of Daulton Wilson’s car and Todd Brennan, Tim Vance and Caiden Black also involved. No injuries were reported. … The caution flew twice on lap two of the second race, first for Nathon Loney stopping on the inside of the track and then for Chad Frohnapfel’s spin. Later, on lap 17, a final caution flew when fifth-running Todd Brennan spun in turn two after Loney made contact with the rearend of Brennan’s car. … Despite the split 12-car fields, each race was counted as an official Lucas Oil Series feature win by tour officials (DirtonDirt.com's records will not include the victories). Drivers didn't earn series points, however.