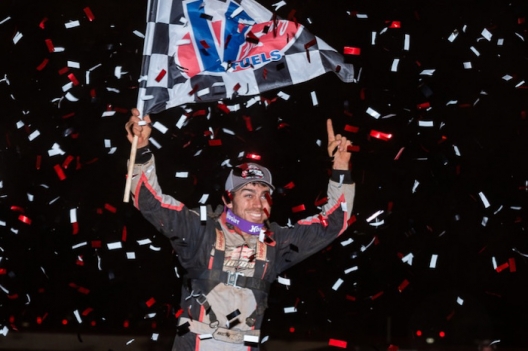 LAVONIA, Ga. — What a difference a day makes. Just 24 hours after Ben Watkins felt the low of failing to crack the starting lineup for the World of Outlaws Morton Buildings Late Model Series feature at Cherokee Speedway in Gaffney, S.C., the Rock Hill, S.C., driver experienced emotions at the other end of the spectrum.

Watkins quickly put Thursday’s disappointment behind him as he raced to his first career World of Outlaws victory Friday night at Lavonia Speedway. A positive attitude and change of scenery worked wonders for Watkins, who shouldered much of the blame for the poor performance in Thursday’s $40,000-to-win Rock Gault Memorial, which was won by Evans, Ga.’s Brandon Overton.

“I can't even believe I'm up here with these cars behind us. It’s unreal,” said Watkins in victory lane at Lavonia. “I’ll be honest with you, I think 90 percent of (Thursday’s lackluster performance) was probably me. I just completely missed qualifying (Thursday) night and that was my fault. I take full blame. But that's how this racing is. You miss qualifying last night and tonight you get up on the wheel you get it done. Wesley Page, he made all the right calls and here we are.”

Watkins powered ahead of polesitter Tyler Bruening of Decorah, Iowa, on the initial start and never gave up the lead, though Bruening did mount a mid-race challenge amid traffic before settling for second, 0.604 seconds behind the winner.

Fourth-starting Brandon Sheppard of New Berlin, Ill. — the WoO points leader — picked up a spot early and finished third, while Overton, arguably the sport’s hottest driver at the moment, finished fourth after starting sixth. Completing the top five was Zack Mitchell of Enoree, S.C., who started fifth, fell out of the top five for much of the race, and then regained the position on lap 33 when he overtook Daulton Wilson of Fayetteville, N.C.

Watkins, whose biggest victory this season was a $5,000 Carolina Clash triumph at Lancaster (S.C.) Speedway, led all 40 laps while earning $10,000 to equal the richest payday of his career.

“I’ll be honest, I can't put it into words,” said Watkins. “It hadn't sunk in. I never would have thought in a million years I'd be here. Growing up as a little kid it was a dream just to race a Super Late Model, let alone win a race and here we are with the Outlaws. Man I don't even know what to think.”

While Watkins led every lap, there were still a few tense moments. Midway through the race he was trying to negotiate lapped traffic, giving Bruening an opportunity to pull alongside twice, but the World of Outlaws rookie of the year contender was unable to complete the pass. Watkins also had to dodge the spinning car of Will Harris, who looped his machine and came to a stop in turn four right in the leader’s path. Watkins jerked his car hard to the right, narrowly avoiding contact with Harris.

“Lapped traffic was treacherous. When we got in the dirty air it really slow me down,” said Watkins. “I seen Bruening coming and I thought I got to make something happen and then the car spinning in front of me … it definitely got interesting for a minute. But I can't thank them guys enough for racing me clean (Bruening) could have run in there and did something crazy, but I appreciate him driving me clean there.”

Making his debut at Lavonia, Bruening, who praised both his Capital Race Car and his Skyline Motorsports crew, said the key for him was on the very first start.

“We were real good. It’s the best I’ve been in a long time,” he said. “The car felt wonderful. I just spun my tires on that first start and it was basically over from there. We needed more lap traffic. The car was really good in lapped traffic. I think I was a little better but I didn't need those cautions. I knew (Brandon Sheppard) was breathing down my neck and didn't want to make any mistakes so all in all it was really good for the first time I've been here.”

Sheppard was rarely in position to make a passing move however.

“Yeah I could get a good run coming off of (turn) four, but I never could beat him into (turn) one there,” said Sheppard. “Them guys did a great job. We had a really clean race there. I got to say congratulations to that Watkins there, he did a great job.

“We definitely want to be a couple spots better. We'll take what we can get and we'll go try to get us one at Bulls Gap (Saturday). I’ve had a little bit of success there last year so we're looking forward to that. We'll take it and move on to the next one.”

Notes: Friday’s victory with a national touring series may have been the most prestigious of Watkins’s career, but it only tied his richest payday. Watkins pocketed $10,000 in winning the Cash Money 100 at Fayetteville (N.C.) Motor Speedway on Oct. 27, 2018. … While Watkins may have been a relative unknown on the national scene, his prowess chasing regional trophies speaks for itself. The 2015 Carolina Clash Series champion has a bevy of victories on regional tours. Watkins has has four Clash wins to his credit. Along with his $5,000 victory in March, he won at Lancaster in 2020 and at Fayetteville Motor Speedway twice in 2015. All three of those wins paid $4,000-to-win each. … Watkins also won a $4,000 Ultimate Southeast Series event a Modoc (S.C) Raceway in 2019. He owns three I-95 Challenge Series wins, three FUEL victories; two Blue Ridge Outlaw Late Model Series victories; and two Southeastern Late Model Sportsman Series wins. … The race was slowed by four cautions, three coming in the final 20 laps. … Watkins joined Overton (2020), Chris Madden (’19), Sheppard (’18) and Darrell Lanigan (’14) as a World of Outlaws Morton Buildings Late Model Series winner at Lavonia Speedway. … Friday’s race was the tour’s only visit to Georgia this season. … The series opened the weekend Thursday at Cherokee Speedway in South Carolina where Overton, of Evans, Ga., grabbed the win. … Sheppard, of New Berlin, Ill., is two victories away from tying Josh Richards for the most WoO wins all-time (78).p Fifth-place finisher Zack Mitchell of Enoree, S.C., still owns the Lavonia track record at 14.990 seconds. … Kenny Collins of Colbert, Ga., missed the 10-minute call and had to move to the rear of the field at the start. … Bad luck continued for Mount Holly, N.C.’s Chris Ferguson who crashed in prelims and missed the feature.