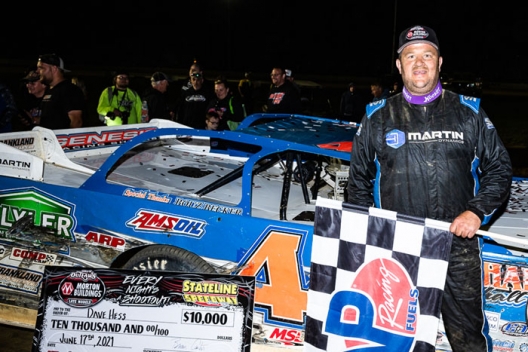 BUSTI, N.Y. (June 17) — Dave Hess Jr. had a pretty good feeling about the World of Outlaws Morton Buildings Late Model Series’s Thursday-night visit to Stateline Speedway, one of the two ovals he knows better than any others.

“Here and Eriez (Speedway in Hammett, Pa.), I grew up racing these tracks and we’ve been awesome all year here,” Hess said. “This is a whole different level of competition, but I knew this could be our race if things went.

“And,” he added, “the whole night’s just been flawless.”

Indeed, Hess, 36, of Waterford, Pa., never missed a beat in the third-mile oval’s 40-lap feature, surging off the pole position to lead the entire distance in his Black Diamond Race Car that has proven to be a hot commodity this year on the Stateline-Eriez circuit.

A winner for the fourth time this season at Stateline and seventh time overall at his two home tracks, Hess brushed off a brief early challenge from three-time WoO champion Brandon Sheppard of New Berlin, Ill., before dominating the race’s final 25 caution-free laps. The Stateline points leader beat Sheppard to the finish line by 1.347 seconds to earn $10,000 for his second career WoO triumph.

Hess appeared destined to battle Sheppard for the top prize after the race’s third-starter steered his Rocket Chassis house car past Briggs for second on lap nine and within a circuit began to bid for the lead. But after the final caution flag paused the action on lap 15, Hess perched his No. 44H in the outside lane where Sheppard had been making time and kept the reigning WoO titlist at arm’s length for the remainder of the distance.

“Congrats to Dave — he did a phenomenal job there,” said Sheppard, who recorded his third runner-up finish in 2021 WoO competition (versus one victory). “He moved up when he needed to move up, and he was really good there through lapped traffic. We could both kind of get through them about the same amount. They were all on the bottom and that didn’t leave me much room to do anything with ‘em.

“I think we had a really good race car, but it just wasn’t our night,” he added. “Sometimes it goes that way.”

Hess emerged from his car after the race to a loud roar from Stateline’s large, partisan crowd. He understood the significance of his performance.

“It’s just awesome,” said Hess, whose previous WoO win came on May 24, 2013, at Wayne County Speedway in Orrville, Ohio. “These Outlaw wins are really, really hard to come by. Max (Blair) got one the last time they were here. We had that Wayne County win a few years back and I had a few when I was younger here that slipped away with wrong tires and other things.

“It feels great to get in victory lane and hold these guys off.”

The sixth-starting Blair wasn’t able to make a run at the leaders after taking third from Briggs on lap 18 largely because “them ruts really just upset me more than it did either of them guys.” But he still was upbeat after claiming the final podium position with his Viper Motorsports XR1 Rocket car because one of his fellow Stateline-Eriez drivers was triumphant.

“You go to Eriez or Stateline on a normal night and I’ll tell dad all the time, ‘If tonight was an Outlaws race, there’s a pretty good chance that the winner could’ve been here tonight,’” Blair said. “It really shows how good everybody is up here. Dave, he’s been crazy good all year, but there’s a lot of good cars up here. I think when we have these races in our area we kind of get to show that a little bit.

“Anytime we get to see a local boy win it’s always fun.”

There caution flags dotted the event. Cade Dillard triggered the first slowdown with a turn-two spin on lap eight. A multi-car tangle followed on the restart when fourth-place Chris Hackett went around in turn two, collecting Tyler Bruening, Dutch Davies and Jake Finnerty. The final yellow flag was displayed on lap 15 after Finnerty spun in turn one.