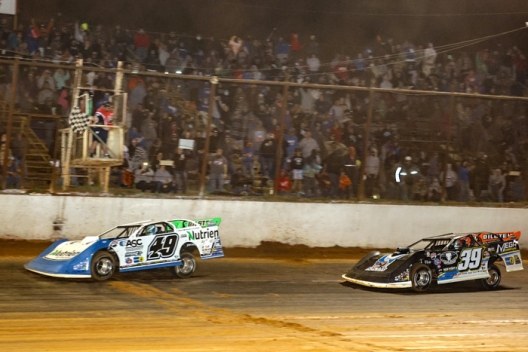 JUNCTION CITY, Ky. — If April showers bring May flowers, what does six April victories bring? Jonathan Davenport of Blairsville, Ga., will soon find out after overtaking Tim McCreadie on the last of 50 laps Friday at Ponderosa Speedway for a $12,000 victory on the Lucas Oil Late Model Dirt Series.

Davenport, who swapped the second spot multiple times with Mike Marlar before making a high-side charge in the final laps, collected his second Lucas Oil Series victory of the season and his sixth overall April victory that gives him a total of 10 feature victories in 2021, doubling 2020's victory total through just four months.

“Man that sucks for Timmy, but that was a heck win for our guys," Davenport said after his two-length victory at the D-shaped 3/8-mile oval. “The first time I came here I embarrassed myself, we got lapped three times. But we have done our homework and have been here pretty good since. It’s definitely an awesome place when they have this place right."

McCreadie, the series points leader from Watertown, N.Y., settled for second just 0.234 seconds behind at the checkers while Marlar, the Winfield, Tenn., driver who's had extensive success at Ponderosa, ended up third. Hudson O'Neal of Martinsville, Ind., and Shane Clanton of Zebulon, Ga., rounded out the top five.

“Timmy’s car was just as good, how about these Longhorn cars lately?" Davenport asked in victory lane after outrunning his Longhorn Chassis teammate. "They have been great. Before that last caution came out I was saying I don’t give a (hoot) who wins, as long as it’s me or Timmy. We’re good buddies.”

McCreadie led the first 49 laps, although Marlar slipped by near the midpoint in a move that was erased by a caution flag. He questioned his decision-making in the final laps.

“Some of it's not knowing where to be, I should have known better that the high side is usually always good at the end of the races," he said. "I got a little complacent, I just didn’t get into turn one very good and I knew I wasn’t very good on the backstretch but I didn’t really hear anybody.”

Marlar didn't have the car to get the job done, but he tried everything he could — including banging it off the wall, he joked — to pull out a victory.

“It was a fun race, I tried hard for you (fans) up there. I just came up a little short. I gave it my all, these guys were just a little better than me today," Marlar told the track-record crowd. “I misadjusted my car just a little bit, I had her a little bit too loose and these are some of the best drivers in the country so you aren’t going to outdrive them. I felt I drove the car really good I just didn’t have what I needed there to win.

“It was a fun race, it was really cool to see Jonathan win there. He was really fast the whole race, I probably held him up a lot but he got her done and it was fun racing with him and Timmy.”

Three cautions slowed the action with Scott James slowing on lap 14 and Brian Shirley slowing on lap 28. Dustin Linville of Bryantsville, Ky., drew the third and final caution when he had a flat tire and tagged the wall between turns one and two on the 32nd lap after an 18th-to-ninth charge.

Notes: Davenport’s victory was the 52nd of his series career ... Brandon Overton of Evans, Ga., started fifth and was challenging the frontrunners when he suffered apparent ignition failure on lap 32. ... Devin Moran and Kyle Bronson were among drivers making mid-race pit stops. ... Seventeen drivers completed 50 laps. ... The series completes a Bluegrass State weekend on Saturday with the 35th annual Ralph Latham Memorial at Florence Speedway in Union, Ky., a $15,000-to-win event.