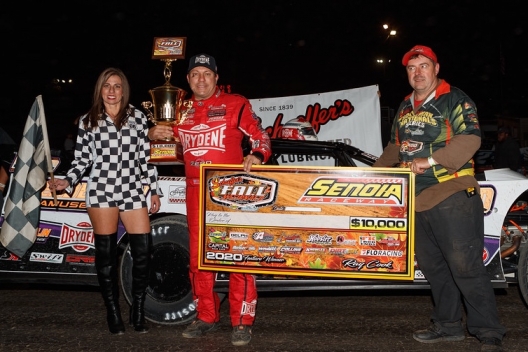 “All of ‘em are sweet,” Madden said when asked to compare Saturday’s success to his win in the 2018 Billy Clanton Classic. “But definitely when it’s a memorial race like this, it means a lot to the family … and they usually have a pretty nice trophy, so hopefully I get me another car (a mini-vehicle like he received two years ago).”

Making his first-ever appearance at Senoia, Billy Moyer Jr. of Batesville, Ark., finished third after starting fifth and briefly reaching second just after the race’s halfway point. Defending event winner Ashton Winger of Hampton, Ga., settled for a fourth-place finish in his family-owned car after fending off several late-race challenges from Michael Page of Douglasville, Ga., who advanced from the 12th starting spot in his Troy Baird-fielded machine.

Clanton, who won his father’s memorial race in 2015 and ’16, fell short in his bid for a third triumph. After leading laps 1-13, Clanton was third on a lap-33 restart when a jam-up off turn four shoved him high. As the yellow lights remained on, Clanton limped into the pit area with damage to his Capital Race Car and did not return.

Madden’s victory was third in eight starts since returning to the seat of his own Chris Madden Racing XR1 Rocket car in early October. He was triumphant to the tune of $12,000 in the previous Saturday’s Magnolia State Cotton Pickin’ 100 finale at Magnolia Motor Speedway in Columbus, Miss., and has finished outside the top five just once with his own equipment (an 11th-place run).

Starting from the outside pole in Saturday’s A-main, Madden was outgunned for the lead at the initial green flag by the polesitting Clanton and actually lost second to Marlar as well. But he quickly regained his footing to shoot around the outside of Marlar for second on lap 11 and then duck underneath Clanton entering turn one to assume command on lap 14.

“The racetrack had some grip there to start with (after the track crew watered the surface prior to the Super Late Model feature) and we got hung up on the outside and it was a little bit slimy out there,” Madden said. “But when we was able to line the racetrack out, our car come back to us.

“We got a real good run on Shane down there (entering turn one on lap 14),” he added. “I know that he didn’t know that I was down there and he tried to turn in and I was already there and we got together.”

Madden survived the contact and proceeded to glide away from the pack while easily handling the race’s four restarts. His romp had him eyeing a third consecutive victory in another 24 hours.

“Hopefully we’ll see if we can get us another victory lane tomorrow night,” Madden said, referring to Sunday’s Blue-Gray 100 at Cherokee Speedway in Gaffney, S.C., that is co-sanctioned by the Drydene Xtreme DIRTcar series and Carolina Clash Super Late Model Series.

Marlar, 42, overtook Moyer for second on a lap-33 restart and maintained the position to the finish but he was never able to seriously threaten Madden.

“I found (the outside lane) a little bit before (Madden) did,” said Marlar, who started third in his Ronnie Delk-owned mount. “Then when that first caution come out (on lap 18) his crew moved him up into the groove I was in and after that we were both up there and it was pretty much over then. The high groove was definitely the groove late in the race.”

Marlar enjoyed his trip to Senoia despite placing second.

“It was pretty close, but it was a little bit off,” Marlar said of his machine. “I probably wasn’t a winning car, but I was an up-front car, and I had a lot of fun out there. This racetrack was awesome.”

The 32-year-old Moyer grabbed second from Clanton on lap 27 but only held the spot for six circuits. He ceded it to Marlar on the lap-33 restart and couldn’t gain it back.

“That long green flag run there when we got by Shane and got to second, I think we were coming to Chris a little bit, but passing him’s two different things,” said Moyer, who made the trip to Senoia to race close to his chassis builder Marshall Green’s Capital Race Cars shop in Woodstock, Ga. “I chose the wrong line on that restart because I thought the first time I kind of messed up.

“But all in all, first time here and this Capital Race Car’s real good. I look forward to coming back.”

Notes: Madden registered his sixth career Falls Nationals win, leaving him one victory behind the tour’s winningest drivers, Marlar and Donald McIntosh of Dawsonville, Ga. … McIntosh clinched his second straight and fourth career Fall Nationals championship before even starting the circuit’s season-ending feature. He finished a quiet ninth. … Ninth-place Jason Croft’s car was towed off after he stopped with mechanical trouble during a lap-44 caution period. … Steven Roberts of Jesup, Ga., saw his evening end early when he slid backward into the wall between turns one and two on the opening lap of the fourth heat. His car was towed off and he did not come out for a B-main. … With added bonus money courtesy of Joey Clanton and the Clanton family, the feature field was expanded by one to start 25 cars.