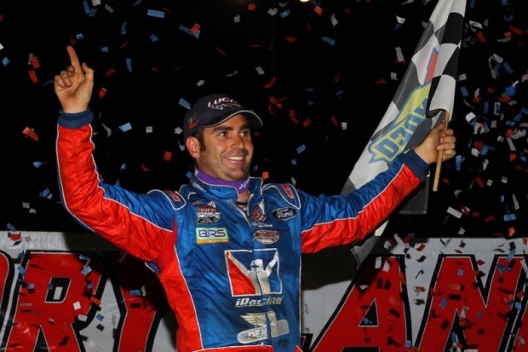 The daring frontstretch move gave the pole-starting Richards his second series victory of the season and 30th of his career as he became the sixth tour winner in six trips to Farley.

“We had a pretty good car early. I didn’t really know what to expect,” said Richards, who watched track workers extensively rework the surface before the main event. “Luckily, it worked out. The track dried out and we were still pretty good.”

Owens, of Newport, Tenn., was the runner-up while Tim McCreadie of Watertown, N.Y., rallied from 12th — and from an early pit stop for a flat tire — to grab the third spot. Early leader Kyle Bronson of Brandon, Fla., who set the pace the first 16 laps, was fourth with Tyler Erb of New Waverly, Texas, rounding out the top five.

Richards, who’d been outside the top 10 the last three series races, was glad to get back on track.

“We’ve had a lot of speed, we’ve just tweaked some things, and we were a lot better tonight,” he said. “I knew last year (the track surface) kind of dried up pretty quick. They were kind of tilling it up a little bit (before this year’s race), so we kind of left our car alone … I was a little tight where it was patchy.

“The last couple of laps, the right-front wouldn’t steer at all. We were fortunate to have that scoreboard on the backstretch (so) you could see the gap and kind of judge your distance.”

Owens closed that gap late in the race but never made a serious bid for the lead after swapping the second spot with Bronson through the race’s middle stages. He was impressed by the winning move of Richards when the winner went between the low-running Owens and high-running Bronson exiting turn four, emerging from the three-wide battle with the lead in turn two.

“Congrats to Josh. That was a heckuva move right yonder,” Owens said. “It was awesome racing with these guys. We had some good clean racing tonight and it’s great to come home with a second-place finish in this Ramirez Motorsports Rocket.

“They definitely helped the track a whole, whole lot (by reworking the surface). We had some holes through (turns) three and four. They took care of all that and did an awesome job prepping the track. I mean, we had some good racing all night long.”

McCreadie gained four positions when a lap-18 flat tire forced him to the pits. He restarted 16th — many other drivers also pitted during the yellow — and rallied back for a podium finish.

“There’s something about this place,” McCreadie said. “Two years in a row we’ve had flats (in the first half of the race) but we’ve been able to overcome. … I’m pretty sure they got both (rear tires) changed under the yellow, so, man, if we could’ve just (changed) the right front, who knows?

“These guys were good. When I got to third I thought I was starting to get another flat. It started laying on the right rear a little bit, so I thought, well, man, it’d be a bad job by myself if I actually blew it out with three (laps) to go without trying to just be safe. Once it laid that little strip of rubber it made it hard to pass."

The race was slowed by seven cautions, none for serious incidents.

A lap-38 caution flew when Earl Pearson spun in turn four, and a lap later fifth-running Shane Clanton stopped in turn-two with a flat tire (Billy Moyer Jr. also changed a flat during the slowdown).

Notes: Johnny Scott rallied from 13th to sixth but smoke started showing on lap 35 and he slowed and pulled to the infield. … Tanner English's seventh-place run came in a backup car after he lost power in the final laps of the consolation race, forcing him to take a series provisional. He thanked the Clint Bowyer Racing team with helping the Riggs Motorsports team get English's backup car quickly ready for action. ... An extensive reworking of the track surfaced preceded the main event. … Several teams pitted to change tires during the lap-18 caution and multiple drivers had flats. … Stormy Scott, who had battery problems that prevented him from hot-lapping, was the fast qualifier for the first time in his series career and only driver to crack the 15-second mark. But he immediately faded in the first heat, finishing sixth. … Scott transferred to the feature by winning the B-main. ... Hudson O’Neal retired from first heat running in a transfer spot. … Shanon Buckingham broke on the final lap of the second heat and took a provisional for the main event. … All four cars running at the conclusion of the B-main transferred to the feature.