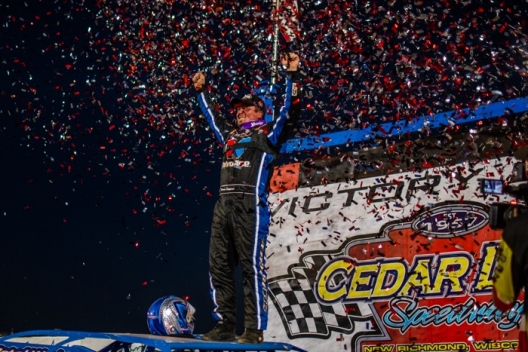 NEW RICHMOND, Wis. (July 4) — Brandon Sheppard might let one race elude his grasp. He won’t often let two in as many days.

Twenty-four hours after settling for a near-miss runner-up finish in the first of the weekend’s two A-mains, Sheppard stormed back to capture the finale in convincing fashion. The race’s polesitter powered his Rocket Chassis house car past front-row mate Cade Dillard of Robeline, La., for the lead on lap two and controlled the remainder of the distance for his tour-leading sixth win of the 2020 season and the 61st of his career.

Sheppard brushed off some periodic threats from Dillard to defeat the sophomore WoO regular by 1.634 seconds in a race that ran without interruption after a red flag on lap two.

Ricky Weiss of Headingley, Manitoba, placed third for the second consecutive night while Dennis Erb Jr. of Carpentersville, Ill., recorded his second straight fourth-place finish. Fourth-starter Jimmy Mars of Menomonie, Wis., completed the top five after slipping back as far as eighth early in the feature and rallying to ultimately reach fifth with a lap-36 pass of Mooresburg, Tenn.’s Scott Bloomquist, who started and finished sixth.

Sheppard considered the race’s lap-two stoppage — for a multi-car incident in turn two that left the car driven by Boom Briggs of Bear Lake, Pa., lying precariously on its left side — to be the key moment in his march to the checkered flag. After being outgunned for the lead at the initial green flag by Dillard, Sheppard nosed ahead to pace lap two and had the red flag save him from potentially giving the position back to Dillard the following circuit.

“We really got lucky there at the beginning of the race when that (red flag) come out,” said Sheppard, who previously was victorious at Cedar Lake in 2013 (USA Nationals prelim) and '18 (prelim and USA Nationals finale). “The bottom was still a little bit slimy when we took off there (to begin the feature) and Cade was able to get a little bit better start than I was. Luckily I was ahead of him when we crossed the line on the second lap.

“Then I was able to get in the line I needed to be in,” he added. “We held control the rest of the race.”

Sheppard wore a big smile in victory lane after rebounding from a Friday-night effort that saw his late-race bid to steal the win from WoO rookie Ashton Winger of Hampton, Ga., fall short. He felt satisfied to quickly resume his winning ways.

“It felt good, my car was good, we all raced each other clean. It was a lot of fun,” said Sheppard, who rang up his 13th overall victory of the season (10 have come in the Rocket house car). “Cade’s been really tough lately and Ricky’s tough every week. We’re just thankful to be standing where we’re standing.

“Our season’s been really good. I think it’s been up there with last year. We haven’t had the big money wins like last year yet, but there hasn’t been many of ‘em. We’re in contention night in, night out … and right now we’re just grateful to have tracks to go to with all that’s going on in the world (with the coronavirus pandemic).”

Dillard, 29, never fell even 2 seconds behind Sheppard and at times while racing through lapped traffic was able to shrink his deficit to under 1 second, but he admitted afterward that he needed some help — help from Sheppard, that is — to emerge victorious.

“At one point we kind of changed our line up in (turns) three and four and got to where I could kind of run to him a little bit,” said Dillard, who won Thursday night’s unique Elimination Showdown to start the Cedar Lake weekend after Weiss, the apparent victor, was penalized three spots because his car failed the post-race deck-height check. “But it definitely would’ve took him making a mistake to get around him.

“He’s one of the best there is, so when he gets up there like that, he doesn’t make any mistakes.”

The runner-up finish continued Dillard’s recent surge, however. He was racing only one week removed from a career-high $30,000 triumph in the Firecracker 100 finale at Lernerville Speedway in Sarver, Pa.

“It’s an honor just to be up here on the stage,” said Dillard, who flashed speed at Cedar Lake last year when he led more than half of the 100-lap USA Nationals headliner before fading. “To be consistently getting up here … it took a long time to get here, so it’s nice to get some good runs. It’s definitely got us some momentum going, myself, my crew. It’s really cool to be able to be consistently competitive with these guys.”

Weiss, 31, nearly snatched second from Dillard on the final lap with an inside bid through turns one and two. The Canadian passed Erb for third on lap 21 and erased a 2-second deficit to Dillard to make his last-ditch attempt at the runner-up spot.

The incident that produced the lap-two red flag came after Brent Larson of Lake Elmo, Minn., slowed with mechanical trouble and Briggs had no way to avoid him. Briggs’s car left its wheels and came to rest on its left side with Buddy Hanestad of Boyceville, Wis., and Ricky Thornton Jr. of Chandler, Ariz., among the other drivers involved.

Briggs’s machine was gingerly righted by track officials and he emerged uninjured. The car was hauled back to the pit area dangling between two wreckers.