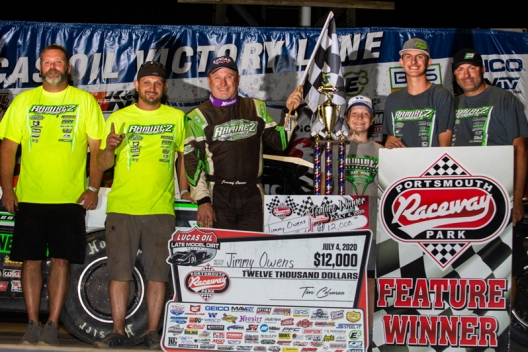 PORTSMOUTH, Ohio — The Lucas Oil Late Model Dirt Series trip to Ohio for Jimmy Owens started Friday with the ending of two streaks: The Newport, Tenn., driver's four-race winning streak on the series and a remarkable stretch of 14 straight top-five finishes on the national tour.

But he quickly put that race at Muskingum County Speedway behind him on Saturday as he got right back on track at Portsmouth Raceway Park.

Starting outside the front row at Portsmouth, Owens blitzed into the lead and was never headed as he led all the way in the Independence 50, turning back late challenges from reigning series champion Jonathan Davenport of Blairsville, Ga., for his 70th career series victory and fifth in his last six starts.

"It was a great night. It's been a good weekend. We can't win ’em all. We'd sure like to try," Owens said in victory lane. "But we're still up in front (in the points) and running top-fives, and as long as we can keep that up, it's going to be a great year."

Davenport finished seven-tenths of a second behind for his second straight podium finish while Billy Moyer Jr of Batesville, Ark., Kyle Bronson of Brandon, Fla., and Tim McCreadie of Watertown, N.Y., rounded out the top five at the 3/8-mile oval.

Shane Clanton of Zebulon, Ga., started eighth and quickly worked up to the second spot, but he slowed with a flat tire to draw a lap-12 caution and fell from contention. He ended up 15th.

While Owens stayed in front all the way en route to his first Portsmouth victory since 2012, slower cars gave him fits.

"I was definitely glad to see the cautions come because I was getting behind (slower cars) and I was getting that dirty air, and we wasn't able to move around as much as we wanted to and didn't know where to be on the racetrack," Owens said. "But you know this Ramirez Rocket has been phenomenal this year ... I can't thank those guys enough.

"I'm just excited to get a win down here. It seems like we've been forever since we've been on this stage right here."

Davenport, who started third and slipped back to fourth early and eventually regained the second spot from Moyer near halfway, hoped the slower cars would help him overtake Owens.

"I really didn't want to see that last caution there," he said. "I was going to try to hang him behind some lapped traffic. I figured that was the only chance I got. But I was really surprised I could stay with him after that caution. I throwed everything I had at him. I probably drove 10 different lines each lap.

"Congratulations to him, but we've finally got some speed back in our cars. I'm just happy we can see the back bumper of that 20 (after) we've been running eighth, ninth and 10th. I've gotta thank all my guys, they've been working really hard.

"I kind of got hung up last night in traffic, so I thought maybe it was going to pay me back one tonight. He was really good. I just started to where I could move around, and he didn't know where to be. Who knows? He could probably have slipped by ’em, but we'd sure have made it interesting."

Moyer matched his best career series finish. He was also third Feb. 6 at East Bay Raceway Park in Gibsonton, Fla., and called it "an honor to be up front" with Owens and Davenport at Portsmouth.

"This is probably my top-five worst tracks, (so) to run top-five here (is great). I looked up and Jimmy and Jonathan there on that restart didn't really get away from me once we got going," Moyer said.  "I know Steve Martin of Nutrien Ag Solutions, a big supporter in this sport, especially me and Jonathan ... I hope that camera caught a lot of us running side-by-side — and we hit each other a couple of times, just racing deal — it was fun. But we didn't have much for Jimmy, I think.

"It's hard to run that top. My engine was getting a little hot, then I finally, after Jonathan got me, I messed up off (turn) four, and after he passed me, I thought, ’You know what, I better just get down there and let the motor cool down.’ The ol’ car started having a little tire shake and whatnot, and the last restart we were pretty good again.

"As bad as last year was, man, to run fifth, ninth and third three nights in a row with the best in the business, like this is by far the best there is, I'm just happy."

Owens was impressed with the conditions at Portsmouth on his winning night.

"It's awesome. It was a good racetrack. A lot of guys said the track, they were a little worried about it when we got here because of all the mud, but this thing always blows off great. It just made for a great racing surface tonight. The trick was knowing where to be and when to be there, especially in the lapped traffic," he said. "It's definitely the smoothest it's been and the raciest it's been. We've had some good shows here, but tonight was probably the best — especially the way it worked out for us."

Notes: Owens has six Lucas Oil victories in 2020, his most on the national circuit since he won eight in 2014. ... The race lasted 25 minutes. ... The series heads to Florence Speedway in Union, Ky., for July 10-11 events, a recently scheduled weekend that replaces a trip to Minnesota scrapped because of coronavirus restrictions.