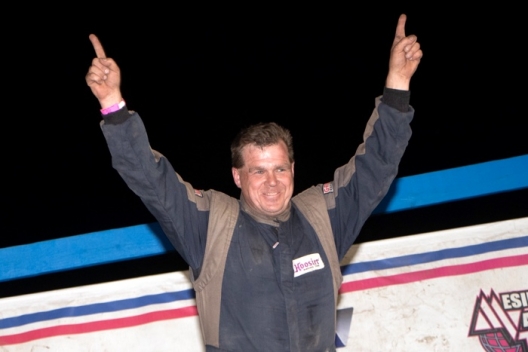 NEW RICHMOND, Wis. (June 13) — Rick Hanestad had to assure everyone at Cedar Lake Speedway on Saturday night that he wasn’t taking his triumph in the 50-lap finale of the 21st annual Masters lightly.

“Yeah, I am excited,” the low-key, 46-year-old driver from Boyceville, Wis., said over the P.A. system after climbing out of his No. 71 machine in victory lane.

Hanestad had shown some emotion — in the form of several celebratory donuts in turn three — immediately after taking the checkered flag 0.575 of a second in front of his chassis builder Jimmy Mars of Menomonie, Wis. He also thrust his arms in the air when he emerged from his cockpit.

But with the $10,000 score representing by far the biggest and richest victory of his career, Hanestad was a bit overwhelmed. He might have even been surprised at his breakthrough considering he was without a race-ready vehicle earlier in the week.

“We didn’t get the cup up until this weekend,” Hanestad said of his MB Customs mount. “I really didn’t even want to race, and this old guy here, (engine builder) John Becker, he kept bugging and bugging for me to race, so we got the car out.

“We ain’t done a damn thing to the car,” he added. “We picked it up Wednesday from Mars’s (shop). (MB Customs employee and Dirt Late Model racer) A.J. (Diemel) scaled it. John (Becker) bought the tires for me to run tonight … so I thank Mars and John Becker.”

While the polesitting Hanestad was outgunned for the lead at the initial green flag in the feature by his front-row mate Mars, the veteran kept the pacesetter in his sights until finally gaining command on lap 28 using the inside lane. Hanestad was seriously challenged for the remainder of the distance as he maintained a short-but-steady edge over Mars, who settled for runner-up money after leading laps 1-27.

Hanestad, who made his 2020 competitive debut the previous night in victorious fashion with a 25-lap WISSOTA Late Model feature win at Gondik Law Speedway in Superior, Wis., threw caution to the wind to make his winning move on Mars while navigating the third-mile Cedar Lake oval.

“What was going through my mind was, drive into those holes (in the inside groove) harder, and he didn’t know I was coming,” Hanestad said. “So I probably wrecked the car.”

Any bent components Hanestad’s Dirt Late Model sustained were well worth it, though. He joked afterward that his five-figure triumph was a long time coming.

Mars, 48, didn’t hang his head after settling for second place. He experienced a special sense of accomplishment thanks to Hanestad claiming the 10-grand prize.

“The top (groove) was pretty good there for quite awhile, and I was kind of too tight to run the bottom like I needed to,” Mars said. “It wouldn’t have mattered anyway because he was gonna pass me on the bottom. He was just way better than I was on the bottom.”

The 29-year-old Dillard, meanwhile, finished a distant fourth in his MB Customs car, giving Mars’s business a sweep of the podium.

“That’s definitely all we had with the motor situation we had,” said Dillard, noting the restrictions he had to run his open-competition motor under by Cedar Lake’s rules for the event. “I just tried to not mess up and keep it around the bottom.”

The race was slowed by three caution flags. The first came on lap 14 when Cole Schill spin on the inside of turn two. Both subsequent cautions came on lap 15, first when Sam Mars — Jimmy’s teenager son — ended up tangled with Dustin Sorenson in the second turn and then on the restart when Buddy Hanestad — the winner’s son — and Steve Laursen came together in turn two.