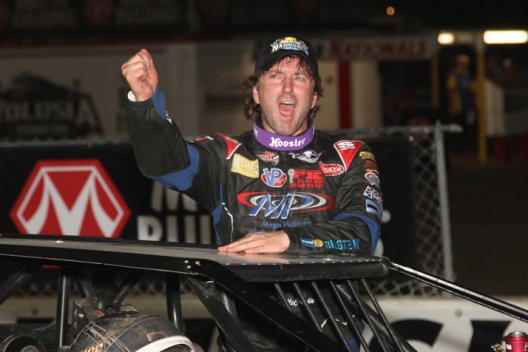 McCreadie grabbed the lead on the opening lap from his pole starting position and then repelled Sheppard, of New Berlin, Ill., at every turn to win his seventh career DIRTcar Nationals feature and first since Feb. 14, 2018.

“That team (the Rocket Chassis house car) that we were lucky enough to beat tonight is definitely the best in the country,” said McCreadie. “Brandon kept showing up beside me and I kept moving lines. Phil (Snellen), my crew chief, he made a little movement with his (signaling) stick and I thought, Drive in harder and slide to the cushion,’and that’s what won us the race.”

In finishing second, Sheppard never let McCreadie get too far out front, though he did have plenty of company. Dennis Erb Jr. of Carpentersville, Ill., ran third for much of the race, often taking a peek under Sheppard as their two blue machines exited turn four.

And Kyle Bronson of Brandon, Fla., made it a three-way battle for the runner-up spot midway through. Bronson, who eventually edged ahead of Erb, couldn’t get by Sheppard and settled for third. Erb finished fourth, backing up Monday’s podium finish, and Jonathan Davenport of Blairsville, Ga., rallied from 10th to complete the top five in his first start at Volusia this week.

After the win, McCreadie rolled to victory lane, exited his car and celebrated in his traditional roof-banging style. It was his third Georgia-Florida Speedweeks victory since joining forces with North Carolina car owners Donald and Gena Bradsher in the offseason.

“Every move that Donald and Gena have made this winter for this team has been amazing for me personally,” said McCreadie. “When it came down to hiring people, when it came down to motors, shock stuff, and just the way we kinda go about our business, it’s pretty cool.

“For this Mega Plumbiing (of the Carolinas) team, Longhorn Chassis, Bilstein Shocks, it’s an awesome win down here at Volusia. (With) Sweeteners Plus staying on board, Baker-Mitchell, all these people that help us, man, I don’t know what to say. The Cornett motor ran really smooth.”

McCreadie was smooth from the get-go, bolting into the lead from the pole and pulling away to a four car-length lead. Sheppard quickly closed the gap and began to apply pressure. On lap four Sheppard took a peak to McCreadie’s inside in turn two. McCreadie turned him away. On lap nine, Sheppard was back again, but McCreadie again kept him at bay.

“I said before, I needed to get into the lead just because Brandon is so good at what he does and his team’s on top of the world right now,” said McCreadie. “We’re gaining pretty good, which is cool.

Sheppard was satisfied, if not thrilled, with his fourth runner-up finish of the season.

“You’re not gonna win all the races. We know that,” said Sheppard. “We had a good car again and we were in contention and that’s all we can ask for.

“We were right there the whole time. We just didn’t get the opportunity to put any moves on him. We’re definitely not gonna hang our heads about that. My guys did a really good job tonight. We won a heat race like we’re supposed to and started on the front row and he got the jump on me and it was over after that.”

At the halfway mark, McCreadie held a half-second advantage, but Sheppard chopped the lead in half as they began to negotiate traffic. Both Bronson and Erb closed in on the lead duo as well. The leader got a reprieve on lap 20, however, when the caution appeared for the slowing car of Middleburg, Fla.’s Mark Whitener.

“Usually I don’t mind lapped traffic ‘cause I usually maneuver around and can pass and I kinda got stalled there a little bit,” said McCreadie. “It’s just like anything racing they start taking a whole bunch of pictures, so once I saw these flashes going off all around the racetrack, I figured he was right back on me again.

“The clean air definitely helped. It let me use the entire track ‘cause I could arc in really well. Honestly, I watched (Sheppard) enough last night and I watched him enough tonight to know that that’s probably how you got to do it to win here.”

On the restart, McCreadie eased back ahead. Sheppard stayed just close enough to take advantage of a McCreadie miscue — which never came — but not quite within striking distance. He did stay well enough ahead of Bronson, however, who was left to defend third place from Erb’s low side advances.

“We had a helluva race. Third sucks, but you know we’re gonna get better and hopefully we can win us one of these deals by the end of the weekend,” said Bronson. “I really gotta give a big thank you to my guys, Tanner and Jayko, Wayne … all these guys been busting their butt all week. You know we broke so much and had so much bad luck, but we’ve had fast cars.

“It’s a tough deal, a tough group of cars. Third sucks. You always want to win. We’re gonna have to go dig a little deeper and come back tomorrow and try to put ‘er in victory lane.”

Notes: McCreadie now has 12 career Georgia-Florida Speedweeks wins. … McCreadie’s three Georgia-Florida Speedweeks wins this season have come at three different tracks: Volusia, Golden Isles Speedway in Brunswick, Ga., and East Bay Raceway Park in Gibsonton, Fla. … It’s the most Speedweeks victories McCreadie has had since winning four times in 2005. … His seven victories at Volusia ties him for seventh on all-time win list with Rick Eckert and Brandon Sheppard, surpassing Freddy Smith, Larry Moore and Shane Clanton, who are tied for 10th with six wins. … Sheppard has three runner-up finishes in the Rocket Chassis house car and one second-place finish in his family owned equipment. … Twenty-four of the 26 starters finished the race, with 23 completing all 30 laps. … The 49th annual DIRTcar Nationals continues Wednesday night, with the World of Outlaws Morton Buildings Late Model Series taking center stage.

Tim McCreadie picked the No. 1 pill in the redraw among heat winners, landing him on the feature’s pole position for the third straight night (Sunday at All-Tech Raceway and Monday’s opener at Volusia) and sixth time in 10 Georgia-Florida Speedweeks events. He’s not 100 percent confident in his ability to stay at the front of the pack for 30 laps, however. “We’re not good enough right now,” he said. “It’s gonna be tough to beat that Sheppard.” … Brandon Sheppard, who starts from the outside pole, will go for his sixth straight DIRTcar Nationals triumph and seventh win in his last eight Volusia starts dating back to the 2018 finale. … Ninth-starter Ricky Weiss is one driver who’s counting on the top-dominant track during the heats changes when the DIRTcar Late Model A-main runs after the 30-lap big-block modified feature. “I hope the bottom comes in better,” he said. … Scott Bloomquist was scheduled to start from the pole position in the first B-main but did not report to the track for the event. The reason? His team missed the call to line up the race, which went out immediately after the big-block modified consolations. … WoO rookie candidate Matt Cosner appeared headed to a third-place finish in the first heat until a late caution flag doomed him. On the restart he slid too hard into turn one and, after he attempted to catch his car as it slid up the track, experienced contact with Cade Dillard in turn two and fell out of a transfer spot. … G.R. Smith slipped out of a transfer position in the third B-main after losing speed as the front seal on his car’s motor leaked oil. His crew was considering changing to a spare engine for Wednesday’s action.

Tim McCreadie won the night’s first Late Model heat race, pulling away after a caution with two laps remaining. Logan Martin and Cade Dillard advanced to the feature after Jimmy Owens and Matt Cosner faltered on the lap-six restart. Johnny Scott’s flat tire brought out the only caution. … Brandon Overton led all eight laps to win the caution-free second heat over Dale McDowell. … In the third heat, Brian Shirley cruised to a convincing win, finishing 2.119 seconds ahead of Ricky Weiss. … In the fourth heat, winner Dennis Erb Jr. turned back a mid-race challenge from Shane Clanton before pulling away in the second half. A good battle for second went to Jonathan Davenport, while Mike Marlar, Josh Richards and Clanton batted for the final transfer spot, which went to Marlar. … Third-starting Kyle Bronson fired a slider at leader Michael Norris and made it stick to win the fifth heat. Norris held on for second ahead of Floridian Mark Whitener. … Brandon Sheppard powered ahead on the opening lap of the sixth heat and went on to win by 1.700 seconds over Darrell Lanigan. Kyle Lear spun on lap five to draw a caution. … McCreadie, Overton, Shirley, Erb Jr., Bronson and Sheppard went the redraw to determine the starting positions for the first three rows.

Afternoon temperatures for the second night of DIRTcar-sanctioned Late Model action during the DIRTcar Nationals rose into the mid-80s under partly cloudy skies. … Tuesday’s field numbers 48 entries (up four from Monday’s opener) with the addition of Josh Richards, Jonathan Davenport, Mike Marlar, twin brothers Stormy and Johnny Scott, Brent Larson, Kyle Strickler and Parker Martin. … Drivers who are sitting out Tuesday’s program after competing on Monday are Mason Zeigler, Vic Hill, Drake Troutman and Tyler Bruening, who appears to be done for Speedweeks after crashing out cars on Sunday at All-Tech Raceway in Ellisville, Fla., and Monday at Volusia. … G.R. Smith of Cornelius, N.C., is back at full force with the Brodnax-Shaker Motorsports No. 89 after taking just a single lap in Monday’s feature because a broken front seal on the car’s engine was discovered after he transferred through a B-main. … Shane Clanton of Zebulon, Ga., is hoping to run all night after scratching following time trials on Monday because rough track conditions prompted him to save his Skyline Motorsports machine for another evening. … According to his business partner Cody Sommer, Scott Bloomquist of Mooresburg, Tenn., felt no ill effects after making his first start Monday since undergoing hip replacement on Jan. 11. His night was short, however, after a broken distributor sidelined his new car as he was running in a heat-race transfer spot. … Kyle Bronson of Brandon, Fla., felt fortunate that the cloud of steam that engulfed his car and forced him out of Monday’s feature with nine laps remaining was only the result of a broken water pump. He doesn’t have a backup motor available for the remainder of the week.

Monday’s race drew 44 entries, a number that could rise slightly as several drivers, including Josh Richards of Shinnston, W.Va., Jonathan Davenport of Blairsville, Ga., and Mike Marlar of Winfield, Tenn., had cars in the pit area but chose to sit out.

Tuesday’s action, includes group qualifying, six heat races (transferring three from each), three B-Mains and the 30-lap main event. Group qualifying by heat races will be utilized; heats will be aligned straight-up and the heat winners will redraw for the top-six starting spots in the feature. Also on Tuesday, the Super DIRTcar Series for big-block mods joins the card for the first of five nights.