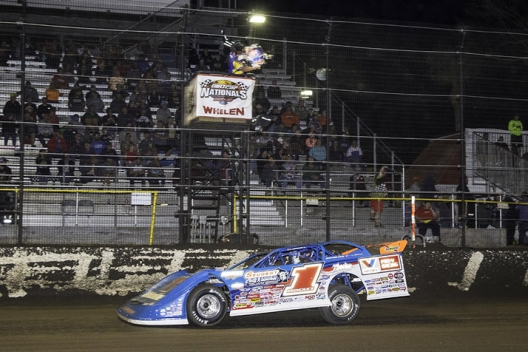 BARBERVILLE, Fla. (Feb. 10) — Picking up where he left off in 2019, Brandon Sheppard of New Berlin, Ill., dominated Monday’s DIRTcar Nationals opener at Volusia Speedway Park. From the outside front row, Sheppard took the lead on the opening lap and paced 30 circuits for a $7,000 payday and his fifth straight win at Volusia going back to last season.

“My car was really good,” Sheppard said. “It’s been good on the restarts all night long. We got the jump on the outside of Ricky (Weiss) in that heat race there and got the win there and that was pretty much key for tonight. You know the track was really fast and I’m sure it was hard to pass through there.”

Sheppard was never seriously challenged up front, though positions two through five were shuffled through three caution flags. Fifth-starting Brian Shirley of Chatham, Ill., finished second, 1.295 seconds behind Sheppard, while Dennis Erb Jr. of Carpentersville, Ill., picked up two spots following a lap-21 caution to finish third, making it a podium sweep both for Land of Lincoln drivers and Rocket Chassis.

“Congratulations to Brian (Shirley), he needed a good run and Dennis (Erb) also,” Sheppard added. “You know, Rocket top three, it’s always good to see that. I gotta thank all my guys, Mark Richards, Steve Baker, everybody at Rocket Chassis for making this thing possible. They do such a great job on this thing and you know our consistency just shows everything with these cars man. They’re just second to none in my eyes.”

Polesitter Tim McCreadie of Watertown, N.Y., lost three positions and finished fourth, while 11th-starting Mark Whitener of Middleburg, Fla., made a late charge to grab fifth from Chris Madden of Gray Court, S.C., with two laps remaining. Madden settled for sixth after running second for much of the race. He pushed up the track on the restart with nine laps remaining, allowing Shirley, Erb and McCreadie to get by.

“We had that red flag there and we were the hardest guy out there (on tire compound) I think,” Madden said. “We had that red flag and the right rear kinda sealed up and we took off there and it wouldn’t turn the car down the hill, so I was up in the cushion and couldn’t get out of the cushion on the restart and those guys got by me on the restart. The finish don’t say what the car was. We had a strong second-place car. We got a little tweaking to do and we’ll be good for the rest of the week.”

Madden ran just behind Sheppard for most of the race, with the leader pulling out to leads of 1.456 seconds by lap 10 and nearly 2 seconds by the time the second caution waved on lap 13. Though both McCreadie (early on) and Madden (late) managed to close in on Sheppard’s rear deck for restarts, Sheppard zipped away each time.

The leader stayed glued to the bottom groove, despite having to navigate a few rough patches, specifically getting into turn one and exiting turn four. Despite the rumble strips, Sheppard was committed to the bottom.

“I was waiting for the track to change you know,” Sheppard said. “I felt the bottom kept slowing up and kept slowing up. I think the only thing that kept that top from being better is that it was rough up there and it was hard to get around. Actually after the checkered I went up there and thought I felt better up there than I did in the bottom.”

“I ran a little bit of that bottom,” he said. “I just didn’t feel as comfortable. It was hard to run it in turns one and two because it was so rough, but once I went around in (turns) three and four I felt pretty smooth, so I just stayed up there and tried to hit my marks the best I could.”

Erb, who cracked the top five on lap 10 and traded spots with Shirley for a couple of laps, was quicker around the hub. He restarted fifth after the final caution and was able to get around both Madden and McCreadie. He eventually finished 1.807 seconds behind Shirley.

“To be able to come in here and you know get up there in the top three and battle up front, it was definitely a good start to the week,” Erb said. “I was able to move around a couple different spots and the car felt good in each place I put it. I was trying to work that bottom, but there at the end I really should’ve moved up a little bit because I did that on the last lap in (turns) one and two there and it felt real good.”

Neither Shirley nor Erb had anything for Sheppard, who streaked away to his fourth Georgia-Florida Speedweeks victory of the season and seventh win overall in 2020. He’s now won six of the last seven DIRTcar Nationals events at Volusia going back to Feb. 17, 2018.

“Our whole Speedweeks has been really good,” said Sheppard. “We’ve been in contention pretty much every night, all year so far, even in New Mexico and Arizona with the family-owned car and now here in Speedweeks we’ve just been right there the whole time man. It’s all thanks to Rocket Chassis and Mark Richards and Steve Baker. Them guys build the best race car out there and it’s unbelievable really.”

Notes: Seventeen of 24 starters finished, all on the lead lap. … The first caution waved on lap 11 for Blake Spencer of St. Augustine, Fla., just as Sheppard was beginning to work through lapped traffic. … Tyler Bruening of Decorah, Iowa, spun on lap 13 to draw the second yellow. Bruening’s car had to be removed from the track with two wreckers. … The final caution came out on lap 21 when Kyle Bronson of Brandon, Fla., slowed on the frontstretch. … DIRTcar Nationals action continues on Tuesday with another $7,000-to-win main event.

Polesitter Tim McCreadie will bid to win his third feature of Georgia-Florida Speedweeks — at a third different track — in the 30-lap DIRTcar-sanctioned headliner. He’s a six-time DIRTcar Nationals Late Model winner at Volusia, most recently in 2018. … Outside polesitter Brandon Sheppard is riding a four-race DIRTcar Nationals win streak as he enters this week’s action coming off a sweep of the final four WoO-sanctioned A-mains last year. Including his WoO victory in the 2018 DCN finale, he’s won five of the last six features contested during Volusia’s Speedweeks activities. … Scott Blomquist’s first night back in competition after undergoing hip replacement surgery on Jan. 11 ended on lap six of the third heat when his brand-new car slowed due to a broken distributor as he ran in a transfer spot. He didn’t come out for a B-main. … Shane Clanton loaded up for the evening after time trials, opting to save his equipment for the remainder of the week. … WoO rookie contender Kody Evans retired from his heat after a bounce through a turn-one hole knocked his radiator into his fan. … Tyler Millwood limped into the infield during heat action due to a broken left-rear drive flange sustained after contact with another car. … Missouri’s Logan Martin was sidelined for the remainder of the program during heat competition due to a busted water pump.

Michael Norris broke away from an early battle with Brian Shirley to win the first Late Model heat race of the 2020 DIRTcar Nationals. Shirley challenged early but slid up the track in turn two midway through the eight-lap heat and began to slip backwards. … In the second heat, Brandon Sheppard got the jump on polesitter Ricky Weiss and pulled away to a convincing win, finishing 2.646 seconds ahead of the Canadian. Tyler Millwood slowed off the pace on the first lap and pulled his No. 31 into the pit area. … Finishing 1.593 seconds ahead of sprint car ace Donny Schatz, Tim McCreadie won the third heat. McCreadie was in perfect position to pounce when Schatz jumped the cushion in turns one and two. Hall of Famer Scott Bloomquist gave up the fifth spot when he slowed to bring out a caution. … In the fourth heat, Chris Madden led early, gave up the lead to Tyler Bruening and then reassumed the point to win ahead of Dennis Erb Jr., who slipped by Bruening late for the runner-up spot. Both Shane Clanton and Donnie Chappell scratched from the final heat.

The six-race Dirt Late Model portion of the DIRTcar Nationals begins Monday on a gorgeous sunny, 80-degree day. … The field numbers 44 cars, but more teams are in the pit area. Among those drivers sitting out Monday’s action are Jonathan Davenport of Blairsville, Ga., who won Sunday night’s Lucas Oil Late Model Dirt Series event at All-Tech Raceway in Ellisville, Fla.; Mike Marlar of Winfield, Tenn., who finished second at All-Tech; and Josh Richards of Shinnston, W.Va., whose Clint Bowyer Racing crew spent Monday in the pit area regrouping after an All-Tech heat crash and installing a fresh engine. … Scott Bloomquist of Mooresburg, Tenn., is planning to make his first start since undergoing right hip replacement surgery on Jan. 11. His SBR partner Cody Sommer said Bloomquist is “feeling pretty good” but is a bit sore after spending the past two days on his feet finishing the construction of a new, all-black car he’s debuting this evening. Sommer added that Bloomquist tested getting in his car with his new hip back at his shop by driving it “around the block a little.” … Bloomquist’s teammate, Chris Madden of Gray Court, S.C., is joining his boss in making his first Georgia-Florida Speedweeks appearance of 2020. … Other first-time Speedweeks 2020 starters in Volusia’s field include WoO regulars Ricky Weiss, Cade Dillard, Ashton Winger and Kody Evans; WoO Sprint Car Donny Schatz, who is running his own No. 15 (the same car WoO champion Brandon Sheppard of New Berlin, Ill., drove to a runner-up finish in December’s Gateway Dirt Nationals at The Dome at America’s Center in St. Louis, Mo.); Ivedent Lloyd Jr., the Ocala, Fla., veteran who ran last month’s WoO tripleheader at Vado (N.M.) Speedway Park in a second Blake Spencer car but is entered in his own No. 21 this week; and Pennsylvanian Michael Norris, Missouri youngster Logan Martin and Florida’s Donnie Chappell. … Tyler Erb of New Waverly, Texas, is expected to pilot Floridian Blake Spencer’s second car in the WoO-sanctioned events on Thursday, Friday and Saturday, provided Spencer doesn’t need to press the machine into service himself. … Tyler Bruening of Decorah, Iowa, is debuting a new Capital Race Car — a machine he jokingly called “our super speedway car” — one day after heavily damaging the mount he ran throughout the Lucas Oil Series’s Speedweeks events in a heat-race crash at All-Tech. Bruening’s Skyline Motorsports team was planning to break out their new car at Volusia even before the accident, but the beat-up vehicle will now need to be taken to Capital’s shop in Woodstock, Ga., and checked for possible frame repairs.

Monday night’s program includes group qualifying, six heat races (transferring three from each), consolations and the 30-lap headliner. Group qualifying by heat races will be utilized; heats will be aligned straight-up and the heat winners will redraw for the top-six starting spots in the feature.