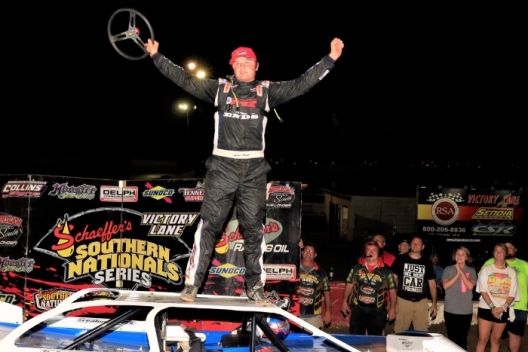 As the front-row starters worked through early lapped traffic, Winger closed in on Madden, rolling the high side to assume the point on lap 15. Fending off Madden again a few laps later, Winger led the remaining distance to become the fourth different winner in five series events contested so far this season.

“I’ve wanted to win this race right up there with all of them,” Winger said in victory lane. “If anybody knows me, they know the Clanton family is like my family. I really appreciate all they do. Shane’s like my dad. Rusty and Joey taught me how to race. This is so awesome.”

Winning his heat race to start on the pole of the 60-lap main event, it was Madden charging to the front of the field at the drop of the green flag. With the frontrunners entering lapped traffic on the eighth circuit, Winger quickly reeled in Madden, a tight battle ensuing for the lead. The 19-year-old Winger would pull ahead and stretch his lead late-race, holding a 1.924-second advantage at the checkered flag.

“I thought that top was going to be there and I figured Madden would be maybe a little bit better than me though the middle. I rode around there under caution and felt like the top was going to come in. I was just waiting and waiting and then that lapped traffic just provided an opportunity for it to work out. (Madden) was so bottled up.”

“We needed to be a little better,” Madden said. “We wasn’t as good as we needed to be. Ashton, he was really good around that top. We was just a little bit free and we wasn’t going to be able to get up there and (run) that top the way he was. But overall, first time being here in our ride there, we had a good run today and a good try at it.”

Driving a car sporting a special throwback look to one of his father's cars, Clanton raced as high as second before settling for third at the checkered flag.

“We were too tight to run the top and really too tight to run the bottom,” Clanton said. “We got under there a little bit and I thought I had something for him and then I just started chattering the front tires and give up what I had. Overall, it was a good night and I want to thank all the fans for coming out and supporting my dad’s race. It’s an honor to be here.”

Notes: Winger's victory was his first-ever in Schaeffer's Fall Nationals competition and his sixth Super Late Model checkered flag of 2019. ... The race winner also earned a $125 bonus for leading the 25th lap. ... The race was slowed by four cautions. … Dalton Cook spun to draw a caution on lap 28; a yellow flag flew on the ensuing restart for a tangle involving multiple cars. … Jason Croft and Donald McIntosh spun in turn four to draw a lap-45 caution; a yellow flag waved on the ensuing restart for another multi-car incident. … The event, which was part of the fourth annual Showdown at Senoia, was rained out during Saturday evening's registration and reset for Sunday.